JM headed out to a rare q and a featuring Val Kilmer. He did a meet and greet with fans after a screening of his Mark Twain film. JM had an awesome time and said that Val was so nice to everyone who came up to meet him. I like hearing stories like that!

Check out JM’s full recap below!

It’s not every day you get to meet one of your childhood idols and say, “I’m You’re Huckleberry.” This past Friday I got to meet none other than Mr. Val Kilmer in Westlake at a special screening for his passion project, “Citizen Twain,” a filmed version of his one man play. To celebrate the occasion I attended the event with my father, who is also a huge fan of Val Kilmer and to provide a chance at redemption. 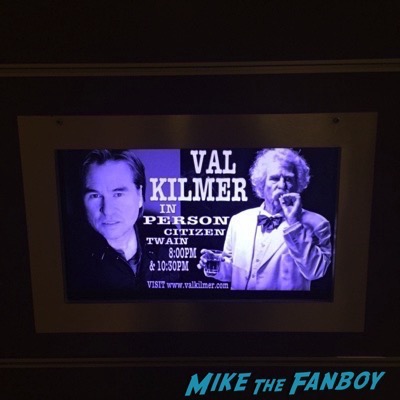 About twelve years ago, my father and I attended the San Diego Comic Con on a whim. Unbeknownst to us, one of the celebrities circulating the floor was none other than Iceman himself, Val Kilmer, who did a signing at the Cool Waters productions booth. Sadly, we literally just missed Val Kilmer the day prior and multiple people at the booth, including David Steinberg (one of his co-stars from “Willow”) and the President of the company, felt bad for us- who even signed and dated his business cards to commemorate Val’s signing. 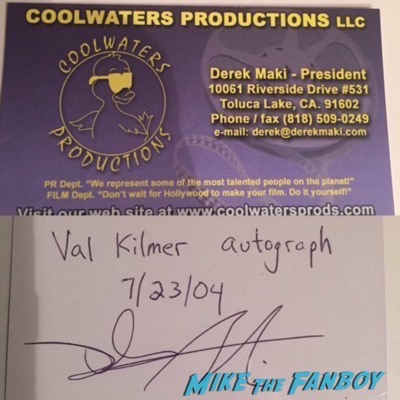 Nevertheless my father and I didn’t know what to expect. After all, special screenings can turn out numerous ways, but something gave me a gut feeling the evening would be a fun event, especially since it was in our backyard and was advertised very humorously:

“COME MEET ME! VAL KILMER in person after I screen my film on Mark Twain called Citizen Twain…You get a free delicious meal, drink and snack delivered to your reclining chair by the BEAUTIFUL STAFF while I introduce the film, followed by a Question and Answer meet and greet where we will make grand plans I will never follow through on. The first 100 tickets get a bonus DVD of KISS KISS BANG BANG and anything else I find lying around my office that might make you smile. Come! Even if you can’t stand Mark Twain, you can always sell your autographed photo on EBAY…To quote Donald, “What in the hell do you have to lose?”

After arriving early, we checked into the theater and were amongst some of the first to arrive. 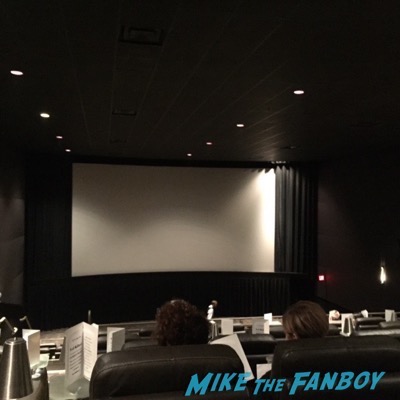 For the event, the first 100 people received a signed DVD copy of “Kiss Kiss Bang Bang” and we got ready for the show. 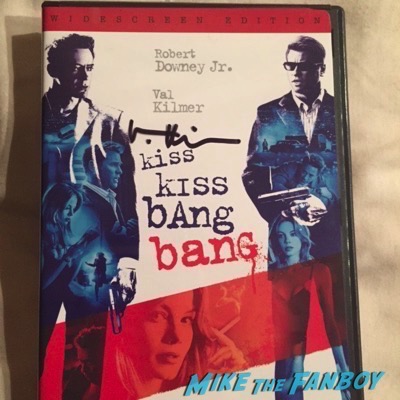 We were greeted by a very friendly theater staff, who literally took and brought our food orders to our seats. Promptly at 8:00p.m. Val Kilmer came out and introduced the film. Despite his recent health issues, Val came out extremely enthusiastic and immediately asked the audience for questions after thanking everyone for his support. After a few brief questions, we watched “Citizen Twain.” 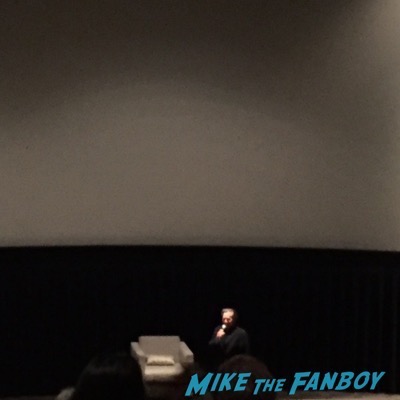 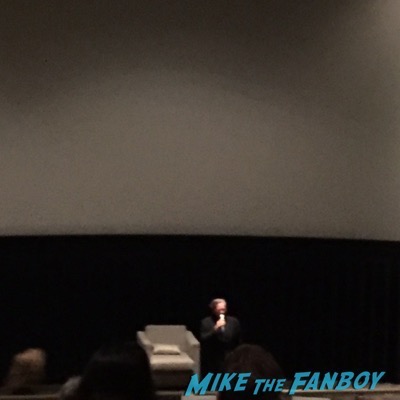 The movie was a wonderful filmed adaptation of his successful stage show and gave great insight into what it would have felt like being in the audience. The film featured an amazing performance and showcased Mr. Kilmer’s killer acting skills. He’s definitely one of the most underrated actors around and demonstrated an unbelievable range portraying Mark Twain.

Afterwards Val graciously came to start the Q and A and added he would hangout for a bit in between shows on the patio. Additionally, he offered to take photos with anyone who wanted one before starting the actual Q and A. Some people actually got out of their seats immediately and lined up as he answered questions. 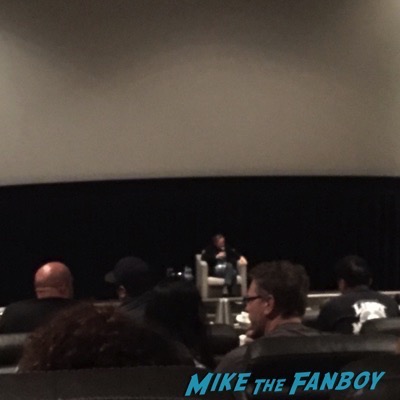 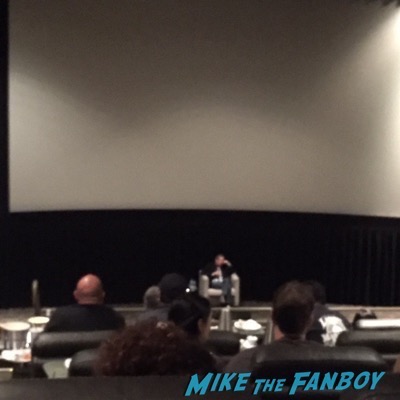 Most people had comments about the film and/or asked about his opinions of Mark Twain, including his Mom in “The Doors,” Gretchen Baker. Like most of the audience, Val was stunned how attractive she remained and jokingly said, “Mom is looking good.” Despite his willingness to answer questions, many people in the audience seemed reluctant to ask more in-depth questions as no one wanted to ruin Mr. Kilmer’s hoarse voice. He graciously battled through and was more than ecstatic to be there. With time winding down, he ended the Q&A and set up a meet& greet to take pictures. Almost the entire theatre lined up and proceeded to make their way down to Val Kilmer for a posed picture. 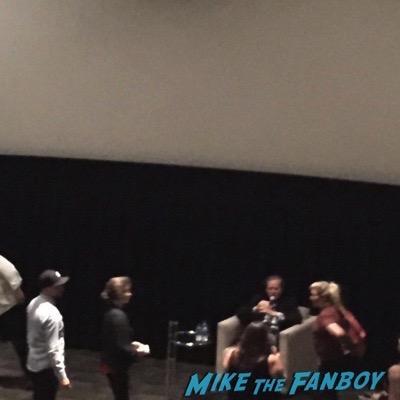 Mr. Kilmer was sitting in a recliner and had an assistant take pictures for everyone on her camera, which they graciously sent out less than 24 hours later. 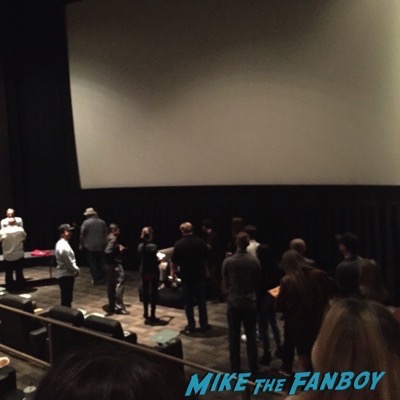 Suddenly while making my way down I noticed about several die-hard autograph hounds, carrying dozens of items each in their hands. Now although I had a few posters and lobby cards on me I relented to presenting two items for Val to possibly sign, a “Doors” lobby card and my father had a “Tombstone” laserdisc.

I cannot begin to state how unbelievably nice Val was to each person. He was taking his time with each individual giving them “they’re moment” and occasionally signed a quick autograph. My father and I are about 15-20 people away, when Val’s manager noticed people carrying several poster boards and large items each. After Val and his manager exchanged some brief words, his manager announced “Val wouldn’t be signing any personal autographs since we all received a signed DVD.” While everyone else put away their items, the autograph hounds defiantly tried when it came time to meet up and each walked away angrily without posing for photos. 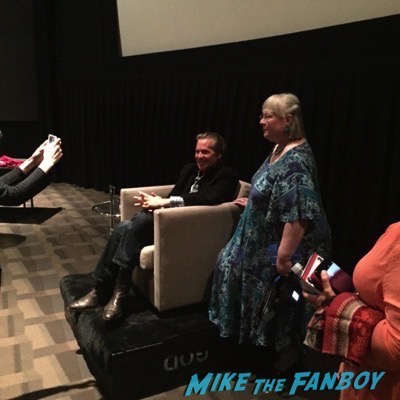 As someone who has reduced attending events over the past few years, it amazes me how certain individuals act when not getting their way and present themselves “as fans.”

Disregarding their behavior I had my father go first and immediately took photos of their interactions. 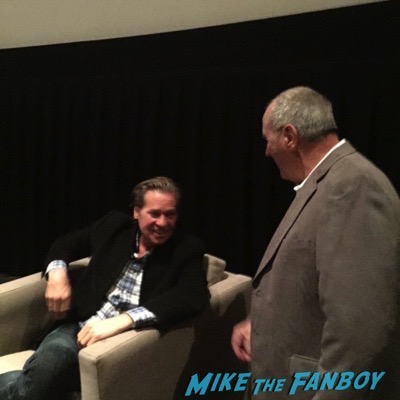 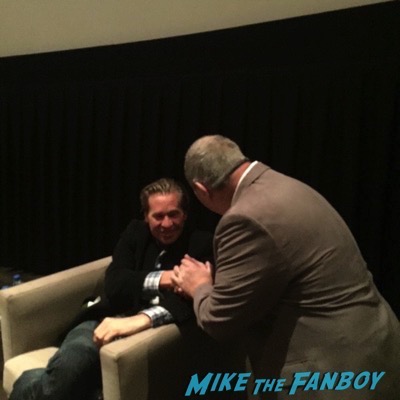 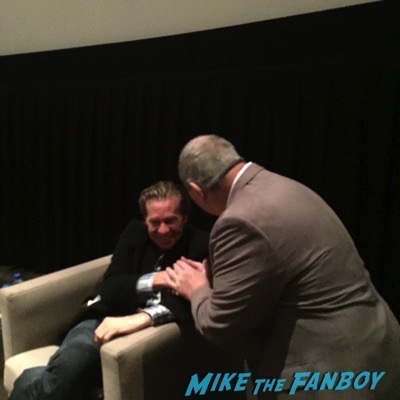 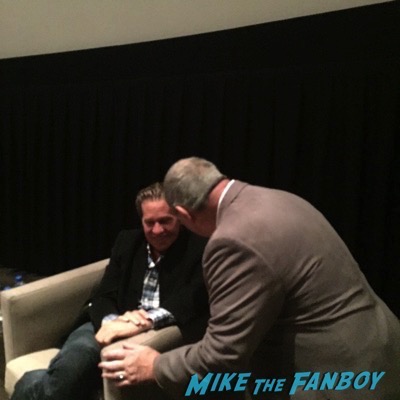 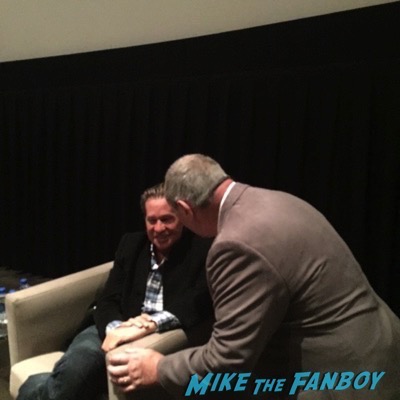 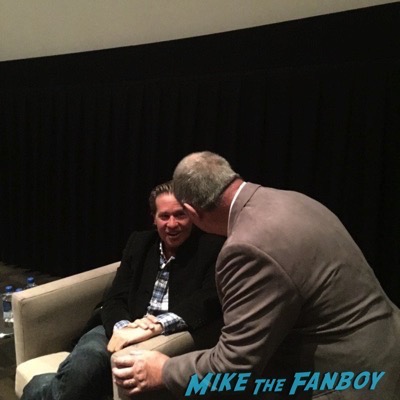 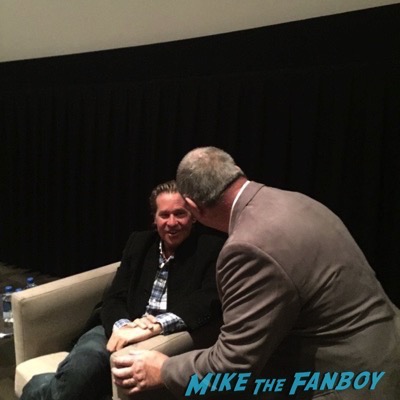 My father went off on our San Diego misadventure and how much Tombstone has meant to our family, which left Val very pleased and laughing. 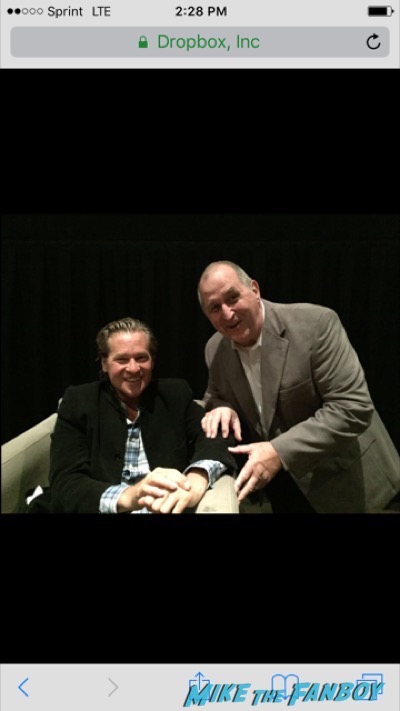 I jokingly followed up and apologized for my father “gushing about him” and his “ramblings.” I told him the impact his movies have had on my life, especially “Tombstone” and my mother’s appreciation for “The Doors.” Those precious moments meant a lot since I grew up pretending to be at the Gunfight at the O.K. Corral playing Doc Holiday and did countless papers on Doc Holiday throughout my school days. 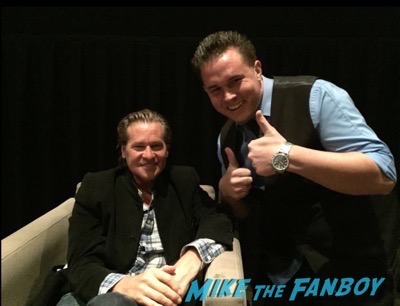 Afterwards my father and I walked away with big smiles on our faces as it was a wonderful bookend to our Val Kilmer adventure. Later on when I came home I noticed Val Kilmer liked my comment on his Facebook page and that certainly was a cherry on top. Thanks again Mr. Kilmer for taking the time out to support your fans and spending the evening with us. 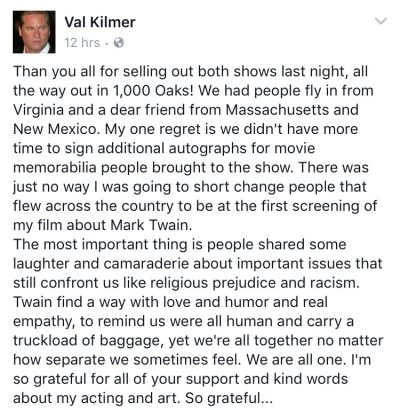