Vampire Academy is the new film from Mark Waters who directed the modern day classic Mean Girls. It based on the best selling book series by Richelle Mead.

Erica was on hand for the Vampire Academy autograph signing at New York Comic Con 2013 and has all the scoop from the signing plus a preview of the hand signed book you can win! Can we say awesome!

Although Vampire Academy won’t start school until Valentine’s Day 2014, the cast and creatives of the upcoming film were on hand in NYCC to talk about the upcoming movie and greet the fans.

Based on the best-selling books by Richelle Mead, Vampire Academy, is well, about a school for vampires and sort of half vampires called Dhampirs who protect them. The story follows Lissa, the last member of one of the great vampire families and her best friend and future protector, Rose. After receiving a death threat at the end of the last school year, Rose took Lissa away to protect her. Now that they’ve been discovered, the two best friends need to adjust back to life at St. Vladimir’s Academy and find a way to resolve the threat to Lissa. Let’s say, it’s an interesting and educational year at school!

Directed by Mark Waters (Mean Girls and Freaky Friday) and with a screenplay by Daniel Waters (Heathers and Batman Returns), this promises to be a fun adaption – check out the first footage from the film:

At New York Comic Con, Mark and Daniel and the stars of the movie came out to greet the fans. Check out the pictures below!

By the way, Mark promises that there will be a full trailer attached with Hunger Games: Catching Fire so keep an eye out!

The cast was so nice, we grabbed some extra swag for one lucky Mike the Fanboy reader! It’s finally time to give away the lovely gift bag and A SIGNED BOOK!! Yes!! They signed an extra book for a lucky fan who couldn’t make it that day! 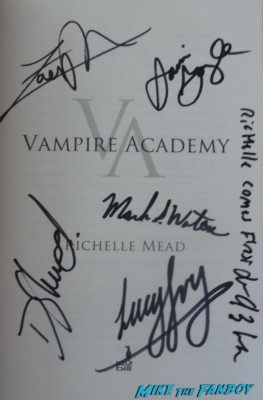 The prize package will consist of one Vampire Academy shirt (the two in the picture below are to show both sides of the shirt), a nylon Vampire Academy backpack and a signed book by all of the folks pictured above (Lissa, Rose and Christian!). 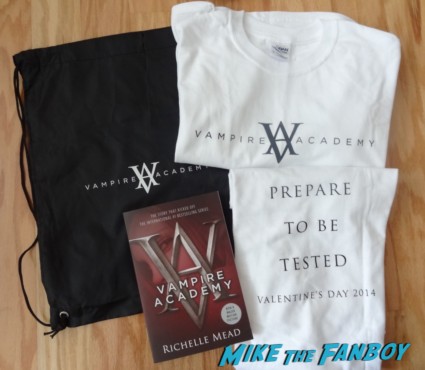 Just for additional proof, here’s a few pictures of the cast and creative with the exact book you get to take home!

The contest is going to launch tomorrow, so check back for all the info on how to win!