Any film written and directed by Amy Heckerling and starring Alicia Silverstone is something I want to see. Now, add vampires… sexy female vampires to be more specific and a cast that includes Justin Kirk from Weeds, Sigourney Weaver, Krysten Ritter, and Kristen Johnston and you would think that this is a movie made for Mike! All you need is a dash of Parker Posey and a soundtrack by Kylie Minogue and that would be the cast. Alas, while the latter may not be true the rest still stands.

Vamps is about creatures of the night Goody (Alicia Silverstone) and Stacy (Krysten Ritter). Both are the Vamps of the title but they have sworn off human blood and now make their living as exterminators drinking the blood of rats and other small creatures. Goody and Stacy love the nightlife, clubbing, hooking up and staying young. They are stems, which are offshoots from a main vampire in this case Sigourney Weaver. Now, Ripley, I mean Sigourney, loves her clothes and let’s just say she has not sworn off humans but the stems must work for her when summoned. 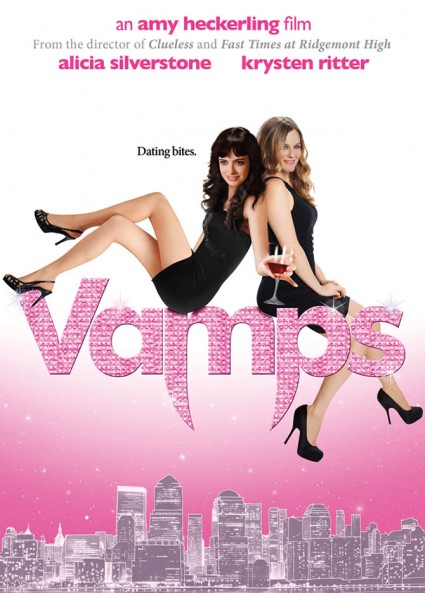 Stacy meets a young cute guy in one of her classes however there’s a wrinkle… He’s the son of a vampire hunter! Say what!?!? When Stacey goes to the house to meet the parents they know she’s undead and this might cause a slight rift in their relationship.

Goody in the meantime randomly runs into her 1970’s boyfriend. He has obviously aged but she finally comes clean that’s she is in fact a Vamp. 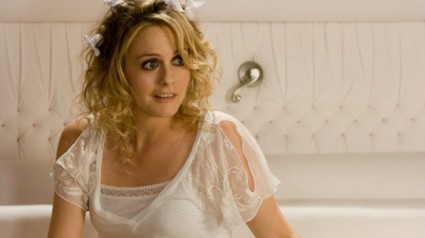 This is where the girls choice lies… Do they stay young forever or do they sacrifice their youth for love. What’s a young vamp in the city to do!

Alicia Silverstone and Amy Heckerling are in fine Clueless form. In fact, if you tuned into the film half way through, you would think that this was Clueless 2 with Cher as a vampire. Down to Cher’s classic lip bite and pout, Alicia Silverstone is back in familiar territory. It serves her well for most of the movie, however there are times when it seemed like a rehash performance. Not that seeing Cher in a slightly different albeit undead version is a bad thing. 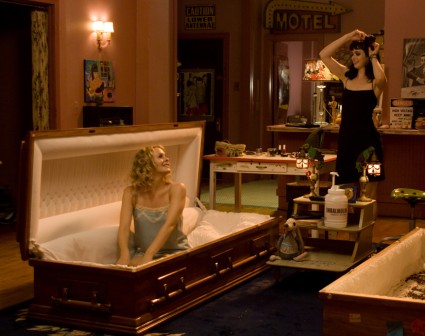 Krysten Ritter is pitch perfect as Goody’s partner in crime. Her comic timing has been finely turned from her two seasons on Don’t Trust The B- and gets better every time I see her. The supporting characters are also great, Sigourney Weaver is over the top divalicious fun, and Justin Kirk takes a strange but interesting character and gives him heart. 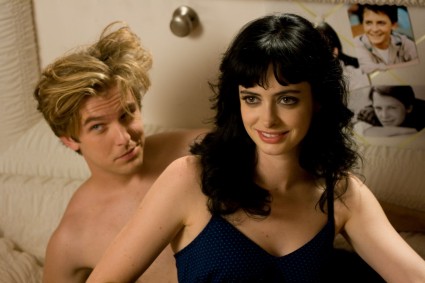 The main issue I had with the film was the script. This was obviously a low budget affair, which is fine, but the script needed work. I loved so much of this movie that the parts that were drawn out or not fully developed stuck out like a sore thumb. This really could have been a great, fun, guilty pleasure film… Sadly, the flaws are so evident it drags the movie down with it. Two more drafts… Just two more drafts and this would have been on constant rotation in my DVD player. Alas, that’s just not the case.

So, instead Vamps settles for being a fun nice diversion, I say give it a spin… Spending an hour and a half with a vamped up Alicia Silverstone might not be the laugh a minute it could be, but let’s be honest it’s still better than a Jonah Hill movie and half of the crap that gets put out there and called comedy!

Vamps is out now on DVD and Blu-Ray and distributed by Anchor Bay Films. 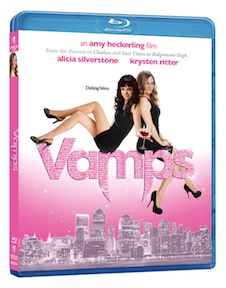