The Veronica Mars movie is going to hit theaters and on demand and I for one couldn’t be happier. I had to be a backer on the film, it’s unprecedented, and I can’t wait!

I’ve been a huge fan of the show ever since I first laid eyes on the blonde vixen known as Veronica Mars and I’m so happy that Erica did this flashback.

Time for a Fanboy Flashback to 2005 and 2006! Why go back that far? Well, because Veronica Mars made trips to Comic Con back then!

In 2005, our heroine had wrapped up its first season and the WB booth just sold merchandise – WB didn’t host any signings and didn’t give away anything to promote their shows or movies. Yeah, we’re talking way far back in history!

Back then, the stars may or may not have a signing – it was all unannounced and happened upstairs in the Sales Pavilion. You just needed to find the right line and wait a little – nothing like what it is nowadays! So after the panel, they bring over the Veronica Mars group with Rob Thomas, Jason Dohring, Frances Capra and Enrico Colantoni. Yeah! 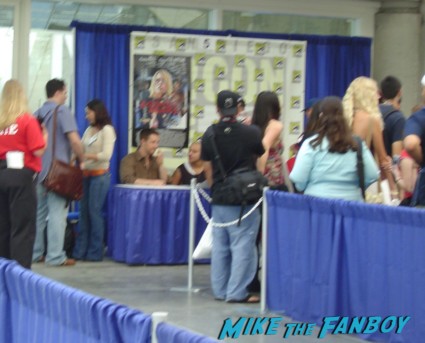 They also bring a large box of one-sheets. Arg! (I have an aversion to one sheets since they are so hard to store and admire…). However, this one-sheet was a cast/crew gift so it’s actually really cool that we get them too! 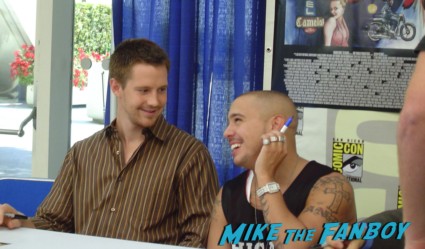 Unfortunately Kristen isn’t here, but the rest of the cast is friendly and chatty. (I didn’t get a clear shot of Enrico, sadness!) 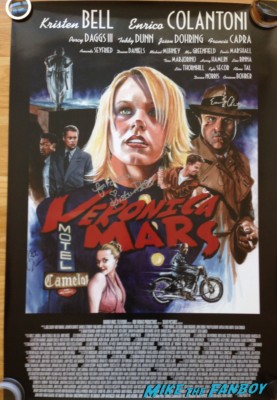 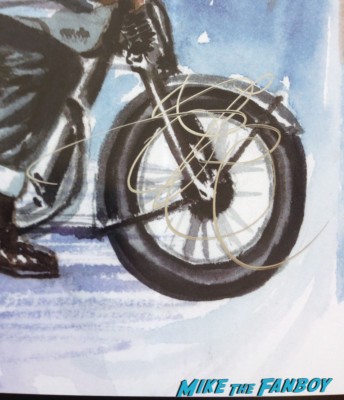 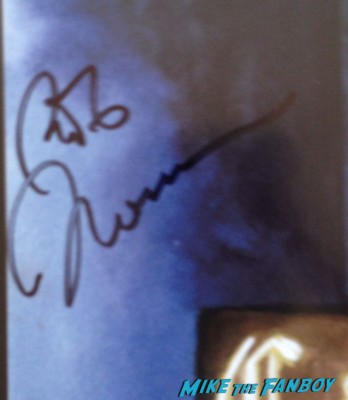 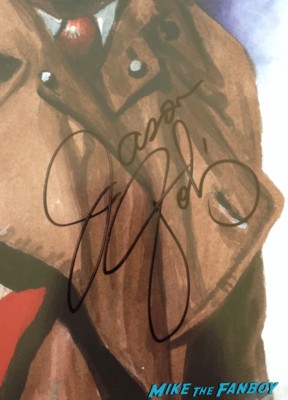 Strangely enough, when I headed back to the exhibit floor later, I noticed that Frances was in front of me. He just wanted to walk the floor and wandered around without any escorts. So casual!

Fast forward a year and the 2006 WB booth is more elaborate booth and begins to host signings. Some signings were ticketed at the booth, others were ticketed at the panel and some were just line-ups at the booth. Veronica Mars was a line at the booth so I got in line several hours early to make sure I got in. The signing table was on the corner of the booth so I got into line as it wrapped around the first corner – a good location and perfect to see the signing table.

That was the first day that Comic Con ever sold out. It was also during a heat wave so it was ungodly hot as we waited in line. So let’s say we were all sluggish with the heat, bodies and, um, scents that come with all of that!

The camera crews come out and do a few quick interviews with the cast. While they do that, I snap a quick picture and Michael Muhney (Sherriff Lamb) notices me. 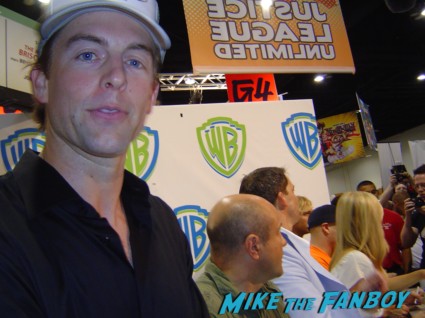 (Clearly, as the picture shows!) He pokes his head out to look at the line and we start to chat (how long we’ve been here, did we like the panel, etc…) He’s so friendly and excited to be here! He then offers to take a picture with me so, on the sly, we get a quick photo before the signing officially begins. 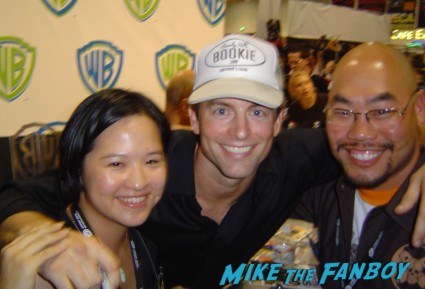 As I go through the line, the news crew wants to interview fans – but no one is stopping since the signing has started and, well, that’s what we waited hours for! (Duh!). Instead of one-sheets this year, they’re signing postcards so we go from one extreme to another. 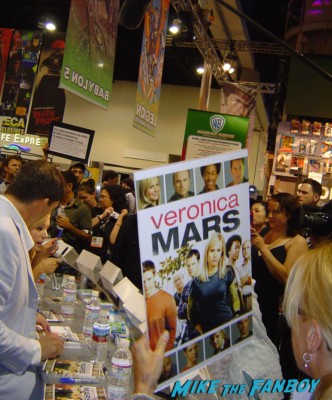 I can’t remember what we said during the signing, but people were happy and Kristen was frantically singing extra postcards. Later I find out she could only stay for a little while since she had to go back to set. So she pre-signed as many cards as she could as the rest of the cast stayed and she went back to work. 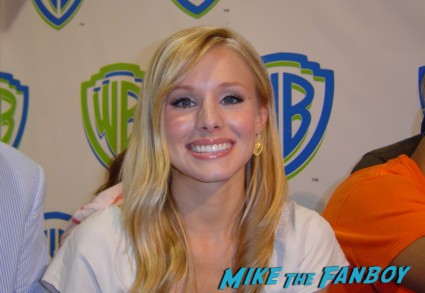 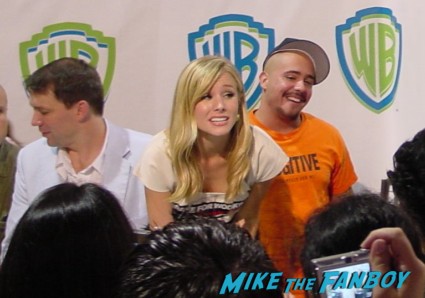 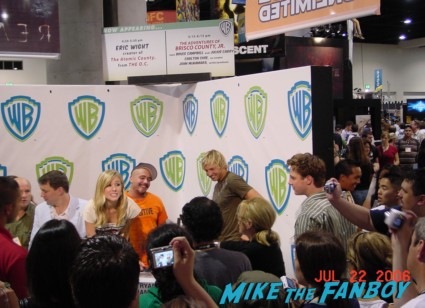 That was great of her as I’ve been in a True Blood signing where Stephen Moyer had to leave halfway through. Thankfully I was the last poster he signed before he kissed Anna Paquin and headed off to the panel — to the shocked dismay of the girl behind me. (“Where’d he go?!?! Is he coming back?!?!?) I know a couple of people who were after me in the Veronica Mars line and they at least have Kristen’s autograph even if they didn’t get to meet her! 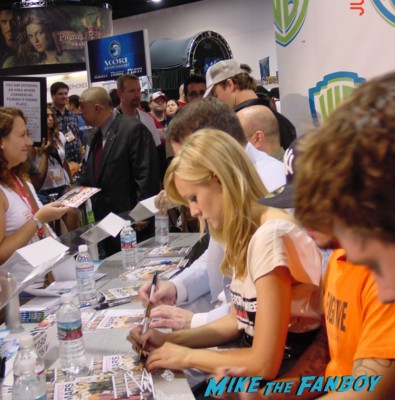 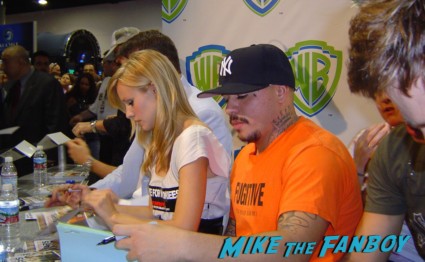 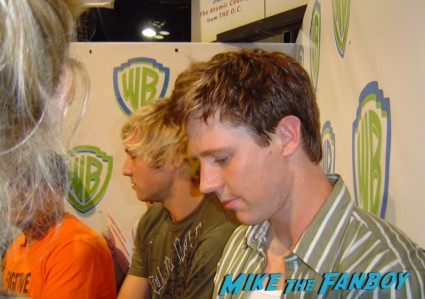 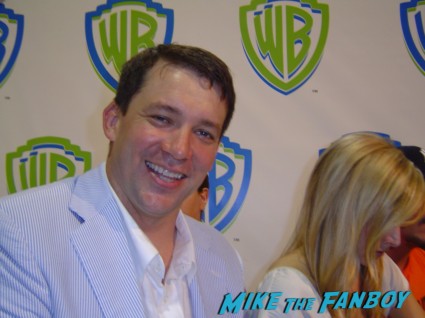 So that’s my flashback to the first two times Veronica Mars visited Comic Con. I’m sorry I missed the signing this year, but glad that I still got to meet them at the Samsung Galaxy party.

Can’t wait for the movie! Can it be January tomorrow? 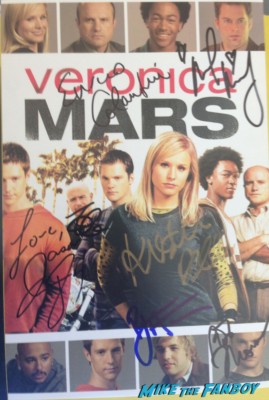