Vikings season three is becoming it’s best yet and if you haven’t checked the series out… I have no idea what you’re waiting for. Seriously, it has everything that Game of Thrones fans love, but it’s based on actual events in history and I dunno… Things happen at warp speed.

Season 3 episode 2 is no different. There are proposals, battles, magic mushrooms, and some ahem… sexy time.

Check out Anushika’s review of Vikings S3 E2: The Wanderer!

Episode 2 opens with floating corpses of Mercian soldiers. I think it’s safe to say the Northman won this battle. Just one of many battles that’ll ensue this season. Ragnar and his troops celebrate their victory in Mercia with ale and “Magic” mushrooms. Princess Kwenthrith, who always seems to be on a good buzz or getting on a good buzz celebrates along with her new Viking allies. She is absolutely thrilled about her uncle’s murder, but yet in disbelief and asks Ragnar to bring his head as proof. During their conversation, Ragnar finally finds a little bit more about her relationship with her uncle and older brother. Princess Kwenthrith opens a window to her hatred and disgust towards her family members. Floki brings her the head without any hesitation and she pretty much has a field day with it. He just totally fell in love. For the first time, Floki actually enjoyed her company. Even though the root of her sadistic disposition was revealed, there’s a lot more to her, and Ragnar still questions her true intentions.

Meanwhile Torstein is not having such a great day. He took an arrow to his arm during the battle and not feeling too peachy. Ragnar is concerned about him and says, “May Freyja lie with you tonight and take care of you”. It’s not a surprise to see them put so much faith in their Gods. Their beliefs give them more strength and hope than anything else, but sometimes just faith alone is not enough.

Our young couple, Bjorn and Porunn surprises us again this week. Bjorn is clearly troubled by Porunn’s attitude towards battle. He knows she has much to learn. Even though he believes in their Gods, he takes charge of his own faith and fights with real knowledge and calculation. Porunn on the other hand takes too many risks and hands her faith completely to their Gods. Bjorn acts more like a father figure dealing with his out of control teenage daughter. Not cute. I can’t really blame him for being so annoyed. He cares about her so much and just doesn’t want her to die in vain. 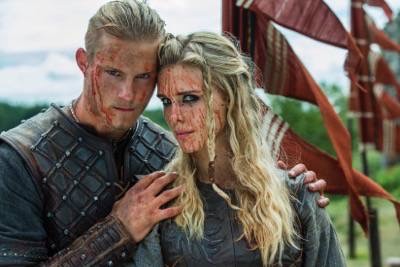 Anyway, he starts to storm away from Porunn and suddenly turns around and utters the two words that make any girl squeal. Yup! He popped the question ladies. “Marry me!” Well, I guess it wasn’t really a question. Porunn was certainly surprised and couldn’t even get herself to answer. Bjorn repeated, “I asked you to marry me, what is your answer?” Of course she said “Yes!” Who would let down a total hottie like Bjorn. For crying out loud, he is a Viking Prince. He walks over to her and says “Good” and walks away. What? Come on! How about a celebratory smooch Bjorn? Maybe a hug? That was probably the most aggressive proposal I’ve ever witnessed. Bjorn just made Floki look like a hopeless romantic. He had more flare when he asked Helga to marry him last season. The evil voice in my head tells me that Bjorn just did it in hopes of having a better control of Porunn and maybe to distract her from fighting. Who knows? We’ll find out. 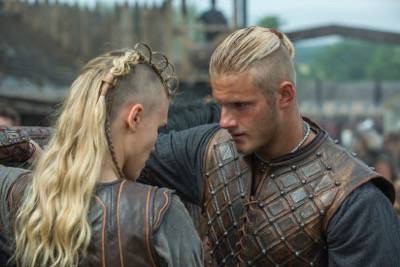 Viking warriors are known to chow down on “Magic” mushrooms before and after battle to get in to their “Berserker” mode aka Beast Mode. Rollo has the most epically hysterical moment during one of his acid trips. This was probably my favorite Rollo scene besides him fighting shirtless during season 2. At first it seemed like he was staring down a corpse, but the soldier’s shrieks when Rollo chopped off his leg not only surprised us, but Rollo himself. He simply didn’t like the angle of his leg. Wow! Those mushrooms really did a number on Rollo. It was terrifying, yet hilarious. Later during the day, he gets slapped for grabbing on to Princes Kwenthrith’s dynamic duo. I guess you do have to buy her a drink first.

Meanwhile, in a not too distant land, Lagertha and king Ecbert continues flirting while exchanging not so secret glances. She fancies him for sure and he is slowly gaining her trust. Lagertha’s walls are still standing, but king Ecbert’s confidence and intelligence impresses her. He gifts her dirt. Yes, I mean literally, but soon work his way up to a gorgeous necklace. Lagertha is definitely smitten. Peaceful farming with the Saxons might be more of a challenge than expected when a conflict of religion arises while Athelstan attempts to bless the house. 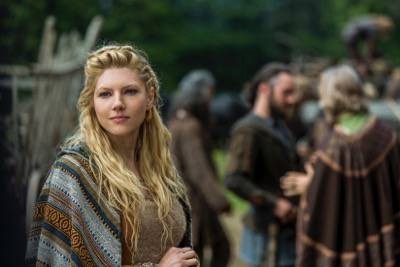 Is there anything dangerously sexier than Ragnar with a “come-hither” smile sailing towards you on boat decorated by decapitated heads? I think not. As the fog breaks, the Mercian army witnesses this spectacle in its full glory and flees inland. Princess Kwenthrith tries to reach out to her younger brother Robert, but fails as his advisors asks him to, “Survive first, Love afterwards”. 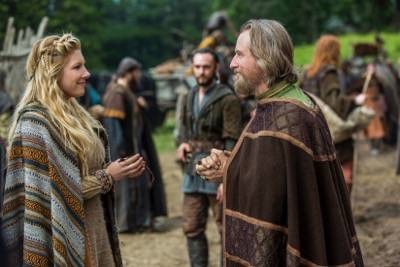 Back in Kattegat, the ladies are about to have their own little adventure. Helga, Aslaug & Siggy, all dream of the same mysterious man with a flaming ball of snow and a hand covered in blood. They go on to say how the dripping blood smoked in the snow and it made them more excited and full of anticipation rather than frighten them with concern. Are they simply missing their male counter parts, or does this truly foreshadow an impending visit from an interesting stranger.

Kalf is making his moves taking advantage of Lagertha’s absence and seducing everyone with his Boyish good looks. He accuses Einar of being a coward, but in reality Kalf is a coward himself. He insults Lagertha by claiming she is “An earl who has nothing between her legs than a goat’s beard”. Let me tell you, Lagertha got more balls than most of these men! She will shred him in to pieces and serve his manhood on a platter once she gets back. Maybe she’ll be too cool to even care. After all she got her own town in England now. 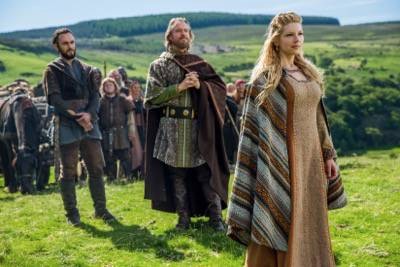 Speaking of Lagertha and her new land, King Ecbert invites her and Athelstan to his Villa. In Aethelwulf’s absence, Judith makes her move towards Athelstan. Team Athelstan gains yet another groupie. She questions him claiming she is “fascinated” by the pagans. When Athelstan hesitates to say anything stating “How can I explain these things to you, you are a Good Christian”, Judith replies “try me”. It’s actually fun seeing Judith being a shameless flirt. She takes it to the next level when she pretty much confesses her desire to Athelstan. A pretty bold move for a Christian woman. Our little Viking actually shows interest. Will he finally get laid this season? I’m excited to find out. 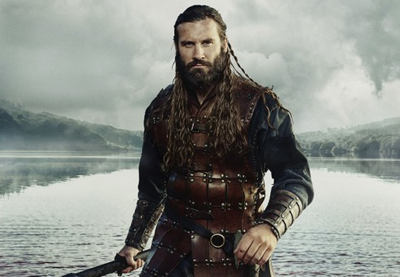 Our ladies back in Kattegat see another dream. It’s more of a nightmare this time around about the seer bleeding on the ground. This can’t be good. Even though they are clearly shaken up by it, they brush it off saying, “it’s only a dream”.

Aethelwulf tortures a Mercian soldier to get information about Robert’s army, but spare his life after breaking the truth to show that they are still more civilized and better than the savage pagans. “We are all not like the Northman”. They might be fighting right beside these Vikings, but they are very much in tact with their moral compass.

This episode revolves a lot around dreams. It’s quite nerve wrecking. Back in Hedeby, Kalf talks about a dream where Ragnar eating his liver while he begs for mercy. Ouch! When Einar asks Kalf if he is afraid of Ragnar Lothbrok, he replies, “What sensible man would not be afraid of a farmer made himself the king” At least Kalf is smart enough to know that much. He wants to be like Ragnar, but he’ll never reach that greatness since he only seeks fame, not knowledge. 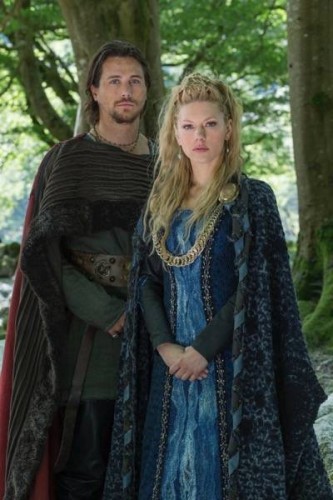 Meanwhile poor Torstein keeps getting worse. He asks Floki to cut off his arm and Floki responds, “I suppose so” as if Torstein’s favor was so trivial. Rollo questions his decision and Torstein snaps back claiming, “It’s killing me stupid”, “I’ve always hated this arm”. They all keep the humor alive to mask the gravity of the unfortunate situation. Ragnar shows concern, since he understands cutting off a limb makes a warrior truly vulnerable and makes his chances of survival quite slim. It was interesting to see Ragnar looking away as soon as the axe cleaves Torstein. The same man who split Jarl Borg’s back and ripped off his lungs without a flinch.

Back in Wessex, King Ecbert warns Judith about Athelstan. I believe he just wants Athelstan all to himself.

We finally get a glimpse of the mysterious wanderer the ladies in Kattegat dreamt about earlier. He is sporting some seriously sweet threads. I can’t wait to find out his story. Who is he? Helga spots him approaching the village. He asks for her help with his wounded hand.

The episode ends with Athelstan walking over to Lagertha with his bleeding hands all stretched out. OMG! What awaits us next week? I know I can’t wait to find out. Until next time, Happy Raiding!