It’s been several long months since we’ve seen our favorite group of battling Norsemen but they’re back with the second half of Season 4. After what was a soul crushing defeat in France for Ragnar (Travis Fimmel)at the hands of his brother Rollo (Clive Standen) he did not return to his home and instead left his family and community to wonder his whereabouts. But now he has returned and his four younger sons are grown young men while his eldest Bjorn (Alexander Ludwig) has taken to help lead their people. Ragnar tells his kin that he is not done yet and still wants to take the fight back to England and asks his sons to come with him. But his sons have a ton of resentment towards him for what they feel that Ragnar abandoned them. Decisions, decisions boys! 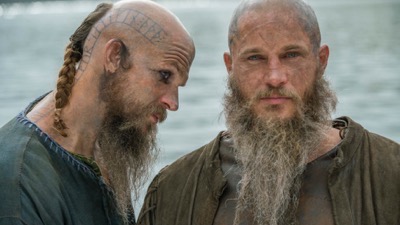 In what seems is going to be an eventual changing of the guard to keep the show fresh and moving forward the episode focuses a lot on the four younger sons Hvitserk (Marco Ilso), Sigurd (David Lindstrom), Ubbe, (John Patrick Smith), and Ivar (Alex Hogh). While the other three seem to be quite content in their ways Ivar seems to have a ticking sinister madman brewing in his belly. He constantly has a vicious stare and hostile attitude that surely comes from the inadequacy he must feel being handicapped, especially during that time period. I can only imagine the dramatic possibilities where this will take his character in the future to prove his self-worth. In a good showing of their solidarity as brothers the story continues with them helping to get Ivar get laid for the first time by a slave girl they have all been frequently having sex with. It’s a great display of the unity of them as a family that has been a trademark of this show. I don’t honestly know how I feel about them this early in the game. Obviously I have my love for the characters that have been with us this long on the show but we’re at Season 4 and I realize things have to grow and change or the stories will become boring and stale. But it IS only their first full episode so I’m hesitant to make too much judgment so soon.

Focusing on our old favorites Ragnar goes and seeks out our favorite shield maiden Lagertha (Katheryn Winnick) who he tells that his reason for not returning was that he didn’t want to rule any longer. He asks her to come with him to England as well even though he realizes the mistakes he’s made in the past. He also apologizes for how he was to her as a husband and tells her that in his mind he wishes he was still on the farm. Man, this fight in France really changed him! You can tell that he has put a lot of thought into his overzealous quest to try and conquer so many countries. Not only that but this visit he has with her reveals to us that Lagertha has taken up a female love interest now in a woman named Astrid (Josefin Asplund). With her desire to not share her rule with a male king this direction makes a lot of sense going forward for the character. 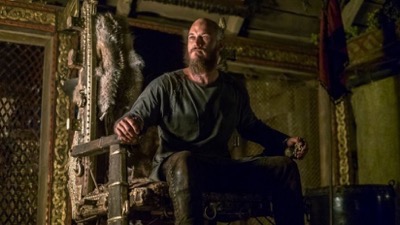 After so much that happened in the first half of the season it doesn’t surprise me that this return back episode was so focused on story and relationships. I’m sure there is going to be a good amount of setup to go into the second half. But with this show I have nothing but complete faith in creator Michael Hirst that he has plenty of great content in store for the future.