Home / Derek • Reviews • Vikings / Vikings Season 4b Episode 15 Review! Derek Says, “I told you all it was coming didn’t I?” 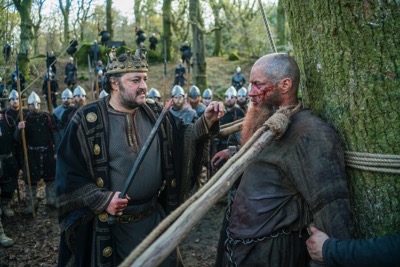 I told you all it was coming didn’t I?! I’m sure many of you saw the signs. They were pretty obvious. I admit it happened sooner than I thought it would but, I guess they wanted us to have some time for the aftermath of it all. Ragnar (Travis Fimmel) saying his good-byes to people in Kattegat, how he apologized to Lagertha (Katheryn Winnick) and Aslaug (Alyssa Sutherland) about what a bad husband and father he had been, and telling Floki (Gustaf Skarsgard) how much a friend he has meant to him. Our beloved farmer/conqueror/king Ragnar Lothbrok finally met his end in this episode. After giving himself up to King Ecbert (Linus Roache) he convinced the king to hand him over to King Aelle (Ivan Kaye) so he could meet his end and this way no revenge would be wished upon Ecbert by his sons. 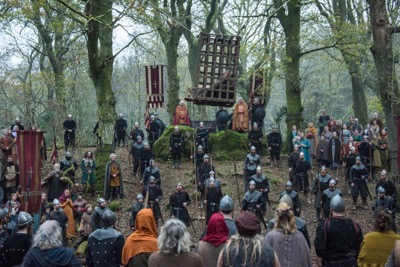 Now that never did sit well with me. I know Ragnar and Ecbert had this mutual admiration for each other but the fact that Ragnar would just let it go how Ecbert slaughtered his people in England wasn’t making sense. And now his final endgame was revealed as Ragnar tells his son Ivar (Alex Hogh) in their last moments that he wants him to tell his sons to seek revenge on Ecbert not Aelle. What a double cross! Ecbert will never see it coming. But he also leaves Ivar with parting words how he will be a great leader one day and how if he “uses his anger intelligently I promise you the whole world will know and fear Ivar the Boneless.” Before Ragnar leaves to be sent to King Aelle his last gesture is to give a cross necklace to Alfred(Isaac O’ Sullivan)that he says belonged to his father Athelstan (George Blagden) in an attempt to try to makeup for the guilt he feels over his death. 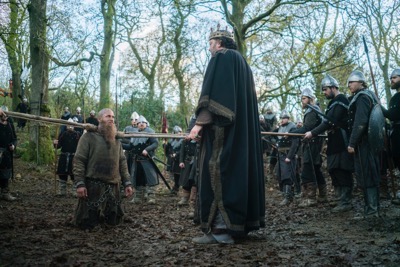 On the very long horse ride over to King Aelle’s there is a fortuitous moment when the man who is “driving” the wagon pulling Ragnar’s cage reveals that he even though he is blind he “sees” Ragnar Lothbrok and knows who he is. This goes back several episodes to where the Seer told Ragnar “you will die on the day the blind man sees you.” But Raganr challenges this prophecy and in his head tells the Seer that he fashioned his own fate, not the Gods so that he was wrong. Being the once powerful man he was I’m sure the whole point is for Ragnar to go out on his own terms. But he also denounces the Gods and says he does not believe in them anymore. 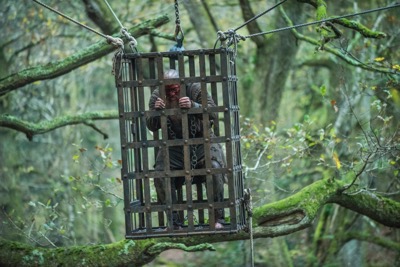 When they finally arrive to where King Aelle is waiting for them the king proclaims how he has been waiting for him “to atone for the sins against my countrymen.” In an effort to make this happen he takes several instances to torture Ragnar by burning him, beating him, and carving a cross into his forehead. But the Viking does not succumb. He stays true to his ideals for even if he himself does not believe in his Gods anymore for his countrymen he will still show that he does. Looking at it from King Aelle’s point of view that even though we love this man for all the great adventures he has taken us on the king is not out of his right to want to punish him for the unprovoked attacks he made on his people and country. Just saying! I’m not enjoying losing Ragnar either but he definitely had it coming, no? 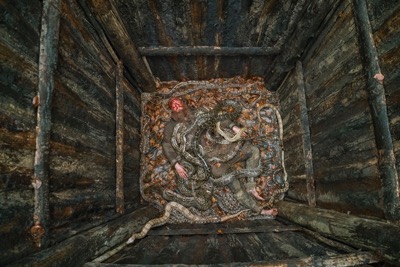 In his last moments before be putting to death Ragnar gives a speech about looking forward to being in Valhalla and “drinking ale from curved horns. I shall not enter Odin’s hall with fear. And I welcome the Valkyries to summon me home!” Yes, that was an edited version but c’mon you watched it! The point is he was true to his words that he had told King Ecbert earlier that while he didn’t believe in the gods anymore he had to show his sons that his faith was still strong so he could proudly die for them. And to add to that truth even more King Ecbert dressed in rags as to disguise himself shows up to the event to witness his former adversary but a man he considered a friend meet his end. As Ragnar delivered his final words there seems to be a moment when they see each other and Ecbert responds with a smile to Ragnar for sticking to his love for his countrymen. Then his body is released into a deep pit of venomous snakes that coil and bite him repeatedly. Ragnar winces in pain but holds his pride and never screams out. After a few moments his body relaxes from the poison and the life leaves from his eyes. Many great shows kill off main characters (Hello Walking Dead and Game of Thrones) but its all about how they continue on after that. Is the loss of Ragnar going to take away too much from the overall story? Is it just going to become the Sons of Ragnar show? Well we have a few more episodes to see where the story takes us! 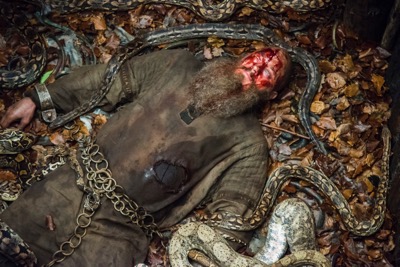 Back at Kattegat we see Ivar being taken off the boat and reunited with Ubbe (Jordan Patrick Smith) and Sigur (David Lindstrom). They ask about Ragnar and as instructed he tells them about their father being handed over to Aelle by Ecbert so they need to take revenge on him. They in turn tell him how Lagertha has taken over AND killed their mother. Man, is he having a rough week! I think suffice to say that with both of his parents essentially being murdered that all of that anger that Ragnar was telling him to use won’t be a problem and most likely a large chunk of the remaining episodes will have a major focus on Ivar. But I’m still waiting to see what the hell Bjorn (Alexander Ludwig) and Rolo (Clive Standen) are up to as well!