Last week for Episode 19 we left off with Bjorn (Alexander Ludwig) and Co. running straight into combat against Prince Aethelwulf (Moe Dunford) and his Saxon army which unfortunately ended before much of the fighting could begin. Although I realize it’s whiny to complain about not getting a big, chaotic fight scene let’s be honest that we all wanted one. Well thank you showrunner Michael Hirst for not disappointing! As soon as Ep. 20 opens up and the screaming groups are running at each other with their weapons raised I couldn’t have been more excited! All I kept thinking was, Bring It! Bring It! Outside of maybe Game of Thrones I can’t think of a show that has such wonderfully intense battle scenes. Not only do we get to see all the sons of Ragnar (Travis Fimmel) fight alongside each other we get a different perspective as the focus turns to Aethelwulf after he is taken down from his horse and is forced to fight on the same level as the rest of his men. Even though he holds his own properly we see him take notice of his soldiers and how quickly the Great Heathen Army is overcoming them. Noticing how the tide is turning and seeing Ivar (Alex Hogh) show up with even more reinforcements he yells out to his men “save yourselves” as he initiates their retreat. 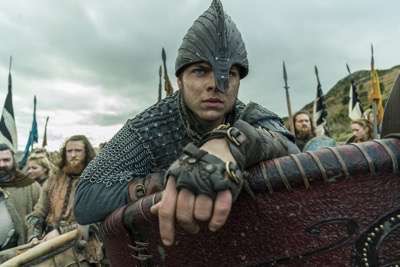 As the Vikings rejoice Prince Aethelwulf speeds back to his father King Ecbert (Linus Roache) and tells him how the whole town must flee for safety. The King refuses and instead wishes to stay behind saying he has his reasons. And with that he also transfers his power to his son and now makes him King of all the lands under his rule. Before his family leaves Ecbert takes the time to wish each of them well (Judith and Alfred) all the while having a blissful smile on his face as in he is single handly saving them all by seeing them off. Similar to when Ragnar left Kattegat and make sure to have closure with his loved ones knowing he wouldn’t be seeing the again. 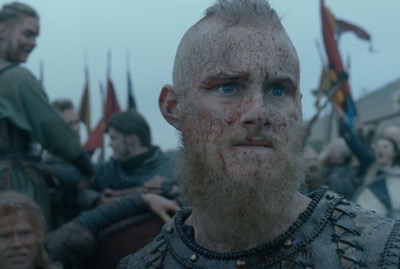 As predicted the Viking army does arrive and charges into the town plundering its treasures and burning all their scrolls and records. The room that Athelstan spent much of his time working on his writings is taken apart and all set to fire as well in a statement from the Vikings dismissing the Christian religion. While Ecbert and his Bishop Edmond (Phillip O’ Sullivan) sit in a room drinking all the fine royal wine left over he eventually grows impatient and runs out to confront Bjorn and his brothers. Surprisingly Bjorn seems to want a few more moments with the (former) King and instead locks him up. In what has to be a last wish devious plan Ecbert offers the Vikings a legal claim for the land of East Anglia? Ecbert reiterates the fact that as king he has the legal authority to enter into an agreement that allows him to choose his own manner of death. Now we all know he’s not King so….this obviously is going to be some interesting ramifications for next season. Is it a trap to get them killed or just a way to fool them into staying around until his son get his next army together? Either way the paperwork is signed and against Ivar’s wishes Ecbert is left to commit his own suicide in the famous bathhouse we had seen in previous seasons. Before he cuts his wrists his mind wanders to the memories of his family, Lagertha (Katheryn Winnick), and Ragnar by hearing their voices in his head. As the blood flows from his body he quietly goes to sleep as the somber score music plays out a very memorable character passing away. 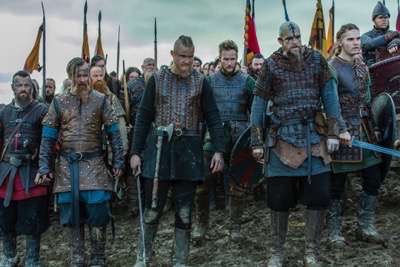 Outside the Sons of Ragnar rejoice with a feast and celebrate with their countrymen in their victory in avenging their father’s death. But now it’s time for the next adventure (and to set up next season, duh) and they don’t all want the same thing. While Bjorn reminds everyone to enjoy the new land they have just been given by Ecbert he will be leaving because he wants to continue to explore the Mediterranean while Ivar feels they hve built a mighty army and wants to continue sacking the country they are in. In a puzzling decision Halfdan (Jasper Paakkonen) proclaims he wants to join Bjorn on his journey. The two brothers that have been linked at the hip for this entire season and had seemed poised ready to take on Lagertha and Kattegat after this conquest are going different ways? There has to be something up with this. I’ve not liked either one of these snakes since they’ve come on so I definitely don’t trust them. All the while Bjorn makes the statement with Ivar wanting to do his own thing that the only thing that was holding the Sons together was to avenge their father. As Ivar keeps trying to win the crowd over and get more followers for his cause Sigurd (David Lindstrom) tells him to stop because they should stay together as brothers. But Ivar not wanting hear it from Sigurd of all people throws insults back at him and they get into a pissing match which ends with Ivar hurling an axe and killing his brother. While Hvitserk (Marco Ilso) and Ubbe (John Patrick Smith) look at Ivar in horror at his actions he looks on with righteousness that he will not be disrespected. Psssyyychhooo. There had been a huge strained relationship between these two the entire season but this action should surely have some repercussions with his brothers. Or it damn well better! 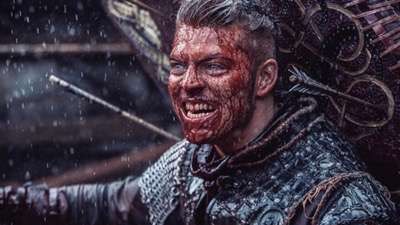 Before we leave Wessex the unexpected death of Helga (Maude Hirst) by her murder/suicide kidnapped daughter seemed unfair on many levels. She’s been around too long and been such an anchor for Floki (Gustaf Skarsgard) that I really don’t get why it happened. All I can come up with is the deep depression that it throws Floki into is going to be something as a turning point for him next season. In all fairness it is kind of a “reap what you sow” kind of thing. You did kill Athelstan (George Blagden)! But what a rough time he’s had in losing Ragnar and now his wife. 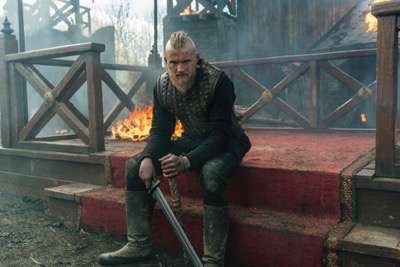 Finally in the last scene we are introduced to Bishop Heahmund (Jonathan Rhys Meyers) presiding over a funeral but then consoling the grieving wife by having sex with her. Guess he has his own way of showing how the Lord heals. Creator Michael Hirst has already said that Heahmund will have a very big role in the next season so I guess this is our little taste of what he might bring? Heahmund is supposedly part of the Knights Templar who were great warriors who even though they served God had no problem in spilling their opponents’ blood in the process. Well we know this show is no stranger to that. 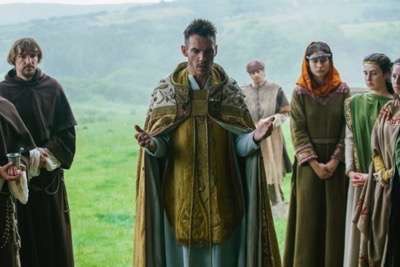 In closing it started out slow this time around with Ragnar putting his affairs in order and going back to Wessex but, after his death the show finished very strong with a good amount of unanswered questions for the direction of next season. Not only did we lose Ragnar but Aslaug (Alyssa Sutherland), Torvi (Georgia Hirst), Helga, and King Ecbert. It’s going to be a very big rebirth for this show next year not being able to rely on the man that helped start it all but with the way they left our group of Vikings in the end it’s impossible to not want to see what happens next.