Wow, what a way to end the first half of the season. I thought I had it all figured out and had a pretty good idea about how it might all go down, but nope. Michael Hirst surprised us yet again. He continues to play with our feelings. Thankfully, the season didn’t leave us stranded in a pool of unsolved emotions; however, left us with one too many unanswered questions. I could live with that. I already miss the show! I could go on and on and on about Vikings, but guess I better get to it.

The finale picks up right where we left last week. Ragnar’s boats draw near to Paris, but soon they get another unexpected surprise. The French forces are equipped with their own boats. Snap! Rollo managed to cover all grounds after all. Now that he is a French Duke, Rollo commands all his boats sitting on a golden throne. The two Lothbrok brothers come face to face once again. This time around, it’s not only Lothbrok vs. Lothbrok, but also Odin vs. the Christian God; a battle between two nations and Gods.

Rollo sends his first fleet of boats to start off the attack. The Vikings battle holding their ground, well water and wins the first wave from the French. The loss scared the French soldiers wanting to retreat, but Rollo delivered quite the eloquent speech to raise their spirits and to convince that it’s their time; now or never. He has come a long way since the days of senseless howls induced by magic mushrooms. The tamed berserker charges his boats right towards Ragnar’s fleet. Ragnar finishes what’s left of Yidu’s medicine. Lagertha and Bjorn looks up to Ragnar for advice and word from the Gods. Unfortunately, he has lost his way and vengeance has clouded his mind. 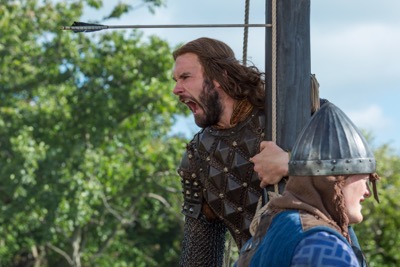 Along with Princess Gisla, all Franks pray for Rollo and his troops; prays for their success and safe return. Emperor Charles is also doing his part within the French walls. Just recently he eliminated Count Odo, who stood as a threat against him and his crown. Today he took down two more conspirators. RIP Roland and Therese. Emperor Charles came across as a week cowardly man, but lately he has been taking control and fooling his enemies with his “gullible” personality. This man knows how to play the game. I like it!

Back in the water, the battle heats up and escalates into a full blown brawl. Both sides are slicing and hacking at each other mercilessly. Rollo and Ragnar finally go head to head. To say the least, things get real messy real fast. The two brothers move on to punching each other’s faces into bloody pulps even after losing their weapons. The fight can’t possibly get more personal than that. Meanwhile, almost all the key players get hurt in battle. Bjorn remains virtually untouched yet again. The fight pretty much ends as soon as Lagertha goes down. Don’t panic, she is just injured. Just when the brothers started charging at each other again, Ragnar gets pulled into the rescue boat. They all retreat with their wounded. Rollo lets them flee the battle. Even though he went against Ragnar, I don’t think Rollo is actually capable of killing him. 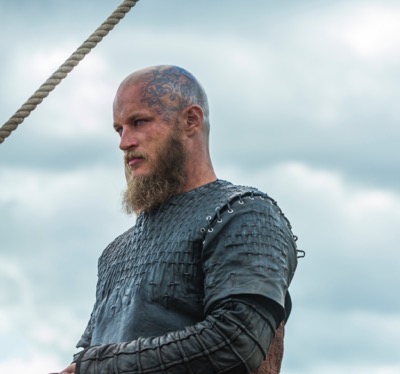 Rollo comes back to a hero’s reception. The whole Kingdom welcomes him with streets full of cheer and joy. He barely stumbles his way forward through the excited crowds. Princess Gisla runs towards Rollo and present him to the Emperor as the hero and savior of Paris. In return Rollo is granted the highest honor and now proudly stands closest to the Emperor. In the meantime, all Viking ships set sail back to Kattegat completely broken down and defeated. Not a pretty sight.

The next second we are taken back to Bjorn in the village fishing. He has grown into the splitting image of Ragnar. We assume weeks have passed, but to our surprise not weeks or months, but close to seven years have passed since the Paris incident. Yikes! Aslaug calls out to Bjorn. Is it me, or is she really hitting that eyeliner hard? The bitter she gets, the thicker the liner. Her fully transformed raccoon eyes remind me of old Siggy. A messenger comes through Kattegat carrying long hidden secrets from merry old England. Bjorn and Aslaug finds out about Ragnar’s bastard child, Magnus and most importantly about the unfortunate fate of their Wessex Vikings settlement. Queen Aslaug is smug as ever and is more than entertained by the news.

Apparently Ragnar has left the village soon after the defeat in Paris. We don’t see any sign of Lagertha, but I’m assuming Earl Lagertha is alive and well in Hedeby. Bjorn immediately heads out to the cabin to inform his brothers. Not going to lie, I was excited to see all the boys grown up; Ubbe, Hvitserk, Sigurd, and last but not least Ivar. All the Lothbrok boys discuss what the news means to them and their people, and most importantly how to deal with their father, the King moving forward. We instantly get a taste of their personalities, especially Ubbe and Ivar. 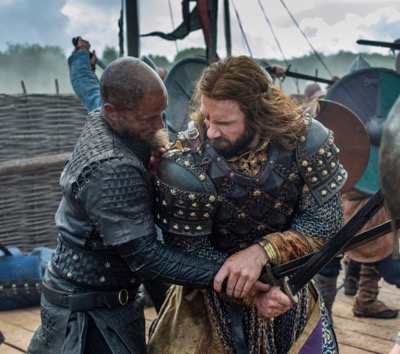 It seems like time has healed wounds between Bjorn and Floki. Like déjà vu; Bjorn asking Floki to build boats to sail on to lands unknown. He is determined to sail the Mediterranean Sea. Bjorn sure knows how to fill Ragnar’s shoes. Speaking of the lost King, he finally returns to Kattegat. A King who abandoned his people doesn’t necessarily get the warmest homecoming. The Lothbrok boys come out to see their father. No one utters a word, but Ragnar who challenges his boys and the rest of the village to kill him. He is quite aware of the situation and his place among the people. Ragnar is ready to pass his title on to one of his sons; the son who dares to kill him. Ragnar gets the last word in the midseason finale; “Who wants to be King?”

I absolutely LOVE this show and I think they did an amazing job with casting. As much as we hate it, we all know that Ragnar is nearing his end. At first I couldn’t imagine Vikings without Ragnar, but now after seeing Bjorn and the rest of the Lothbrok boys, I’m excited to see how their characters will develop during the rest of the season. Don’t forget we haven’t even seen Magnus yet. It’ll be interesting to see how King Ecbert will play Magnus to his advantage. Will Magnus reunite with his brothers, or go against them? Of course, there are plenty more battles and raiding in the near future. I can NOT wait! Hope everyone is just as excited for the next generation of Lothbroks.