Tension grows in the camp as King Ragnar and King Finehair attempts to concoct a battle plan to penetrate French defenses. Since they are still in the dark about what’s possibly in store for them at the borders, they device a plan which includes invasions on ground as well as water. Ragnar and Finehair agree to attack the forts on water while Lagertha and Erlendur make their moves on land. They expect the ground teams to divert the archers’ attention, allowing safe passage for the boats.

In midst of the battle plans, Bjorn confronts Erlendur on his “misplaced” possession. Bjorn shows Erlendur his father’s ring; however, Erlendur denies any knowledge of it. Even though he knows the truth, Bjorn continues to toy with Erlendur. Meanwhile, Ragnar continues to express his concerns for Lagertha’s unborn child. She finally reveals the prophecy of her childless future. Instead of putting him to ease, the news worries him even more.

The following day, they set off in their boats. High up on the towers, Rollo looks down on them as the troops approach the French forts. The Berserker who went to battle roaring half dressed with a raging heart, stands hauntingly still and quiet sporting royal garbs and locks. Wow! Rollo flipped one eighty on us. Who knew he could be tamed? What are they feeding him? Definitely not magic mushrooms. Rollo’s patience and confidence outlasted Count Odo’s; who grew nervous with every nearing inch of the boats.

Lagertha and Erlendur lead their troops on land to take out the archers on the tower, but unfortunately, they came across a surprise they weren’t prepared to overcome. The ground troops walked on to a hidden bog, turning them into sitting ducks for the French archers. Tables turned as the archers began to take down Viking warriors stuck in the bog. Lagertha immediately directed them towards dry land, but the irreversible damage left them with unfavorable numbers.

Ragnar takes advantage of the quick window of opportunity to charge full speed pass the fort, but alas, they were caught off guard when the French pulled out the massive chain rope across the channel capsizing their boats. With no immediate threat from land, the French soldiers were able to continue to rain down arrows at approaching boats. As if the chaos wasn’t bad enough, Rollo literally adds fire to the madness. After catapulting sacks of fuel, the archers set fire to the boats and its surrounding waters. Is it me, or did Rollo just recite poetry before giving his commands? The mind of a Viking and the discipline of a Frenchman; certainly a lethal concoction. Duke Rollo has turned into quite the Maestro of War. He remains in command orchestrating his fine tuned symphony with mere swift waves of his hand. Colour me impressed! Rollo’s precision with timing and strategy wins the battle for the French. 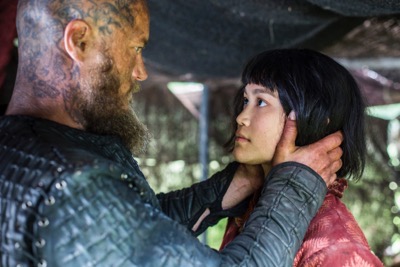 Just when we thought the worst is over, Rollo sends Roland and his men to attack the Viking camp site. They kill everyone in view and burn their tents. Lagertha and Erlendur get surrounded by French soldiers and are forced to retreat. Speaking of retreat, the battle ships turn into rescue missions as they scoop out drowning warriors. Even though their friendship might be beyond repair, Ragnar dives into rescue Floki. If it wasn’t an option before, I think it’s safe to say their friendship is on the mends starting now.

Rollo saw this battle as a promise and duty rather than an act fueled by revenge. He gained no pleasure in defeating his family and friends. However, Rollo seemed more lucid this time around; not sure if it’s a good thing or not. I guess he has more practice in betrayal; his moves were much more calculated and unlike last time, he brought victory to his “new family’. Princess Gisla was quite taken back by the shocking number of shield maidens. As a strong woman herself, she admired all the fallen warrior women. 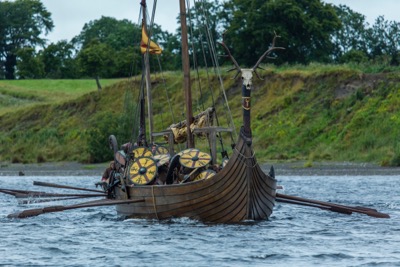 Do you know who truly won the war? Harbard. Yup, while all these men are fighting their hearts out, Harbard is in the safety of Kattegat “comforting” all the lonely women, including Queen Aslaug. Poor Sigurd is caught in the middle of it all; puzzled by everyone’s admiration towards Harbard, who continued to “spread the joy”.

Back in merry old England, King Ecbert heads out with his men to deal with Mercia. He meets the nobleman behind the rebellion. After getting a quick history lesson on the disturbing royal family, the nobleman offered King Ecbert a deal he possibly couldn’t resist; he is willing to hand over Mercia to King Ecbert if he lets the nobleman regain himself. He wishes to go on a pilgrimage to Rome leaving the crown of Mercia in King Ecbert’s hands. Now let’s see how he’ll break this news to Queen Kwenthrith. I’m sure her reaction will be quite an event.

Viking warriors return to camp just to find the whole site in shambles. Floki is devastated to find Helga on the ground burnt and barely breathing. To our relief, Ubbe and Hvitserk survived the attack unharmed along with Yidu and Torvi; hugs all around. Poor Yidu got to stand awkwardly next to family reunions, being just a spectator. Not only she didn’t get comforted by Ragnar, he threw a fit demanding more medicine from her. 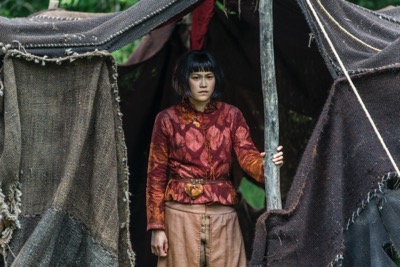 Floki has saved so many souls at the brink of death, and he is doing all in his power to save his beloved Helga. Will his magic be powerful enough to heal her? After treating Helga, Floki walks out into the rain to distance himself from the heavy-hearted camp. The next instance, we witness Queen Aslaug approaching Floki. She seems to be going above and beyond to comfort Floki. It’s hard to believe it’s a fantasy or a dream, but whatever it is, it’s happening. Floki’s image begins to switch back and forth with Harbard’s during the royal treatment. Floki is having a first-hand vision of what’s really going on between Harbard and Queen Aslaug. What’s his connection to the mysterious wonderer? Either way, Floki enjoyed the ride while it lasted.

We are parted with unsettling images of Ragnar talking to a decapitated head. The dude is really losing it now. It won’t be too long before Bjorn takes complete charge of the troops. They are ready to attack once again. I’m not sure if I’m ready for another blood bath next week. Rollo outsmarted them all. Will the Vikings bounce back from the major blow? How will they approach French Court now?