Within the mighty French walls, Emperor Charles praises Count Odo on his recent victory. He offers his gratitude, and Count Odo uses this opportunity to raise concern about the Emperor’s unconditional trust on Duke Rollo. Count Odo urges Emperor Charles to take action against the “former” Viking before he gets a chance to make his own moves against the French court. Even though Count Odo’s concerns were shared by Roland, the Emperor still remained skeptical about the true nature of Duke Rollo. Instead of blindly following their advice, the Emperor requested time to contemplate on the matter. 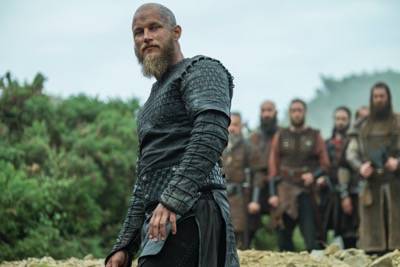 Meanwhile, King Ecbert and his Knights return to Wessex. He announces the merry news about them regaining rule over Mercia. Even though he didn’t lie, he was selective of the information he shared with his people; not to mention Queen Kwenthrith, who assumed herself back on her throne. She is about to get an ugly surprise. Then again, King Ecbert isn’t the only one with secrets. Queen Kwenthrith pays him a visit to share joyful news about her pregnancy, and it truly shouldn’t come as a shock to find out that King Ecbert’s son, Aethelwulf is the proud father. In return, King Ecbert revealed the complete truth about the Mercian victory. Thanks to her pregnancy, she didn’t quite manage to leap over the table to pounce on King Ecbert.

Ragnar’s strength and strategy are questioned after the recent bloody debacle. They’ve given up on Paris and set sail back home. While drifting ever so pathetically down the river, King Ragnar finally gets his groove back. He suddenly orders all his ships to set camp on shore near a cliff range. Confused by his decision, rest of the leaders starts to doubt Ragnar yet again. Little did we all know what he had up his sleeves; Ragnar plans on carrying the boats over the cliff up the river. Yup, he has not given up on Paris. I repeat, Ragnar does not give up. To make things even more exciting, he entrust his old best friend Floki to carry out the mechanics of the incredible project. Ok, who else tear up when Floki claimed, “No. I can do it Ragnar. I can do it for you. Everything I do Ragnar, is for you.” The dynamic duo is BACK people! I’m so HAPPY!!! 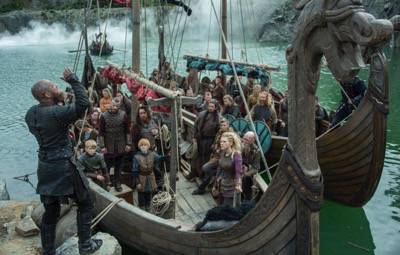 Back in Kattegat, Harbard continues to “woo” the ladies. However, Sigurd is not amused with his charms what so ever. As a matter of fact, he seems to be the only one who is able to see right through Harbard’s charade. Later the same day, Sigurd leads Aslaug to one of Harbard’s “healing parties”. She is not pleased to say the least. Aslaug goes bat shit crazy and rampage through her house taking her anger out on every non-living thing; well, until Harbard walked inside her chambers. He failed to talk his way out of this conundrum and ends up walking away from Aslaug. Harbard claims to sincerely love Aslaug, but refuses to be her property.

Emperor Charles enjoys a nice supper with the newlyweds. Quite satisfied with their victory, the Emperor assumes the matter to be fully handled. Nevertheless, Rollo reminds him that Ragnar is still alive and that the battle is far from over. Moreover, he confronts the Emperor about his true intentions. Suspecting her father’s impending moves, Princess Gisla shares her own blissful news; Duke Rollo is going to be a father; just like that, Rollo sealed his alliance with the French. Wow, seems like everyone is getting knocked up. Who is next? Queen Aslaug? 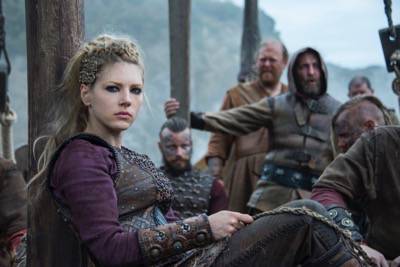 Oh Floki…you are truly a magician blessed with the art of building. He actually manages to build a working contraption to carry the big boats over the cliff. Kudos O strange one! One by one, the boats are lifted off the river on to their journey upstream. Even though his ways were questioned, King Finehair is finally amazed and impressed with Ragnar’s tricks and willfulness. Yidu’s drugs are affecting Ragnar, but at the same time it’s giving him the strength to move forward with the raid.

For the first time ever, Therese “whips” the table around on Count Odo. He ends up at her mercy tied up in shackles. For a so called civilized man, he sure knows how to wave that freak flag. He is amused by the lack of force in Therese’s strikes, but his smile disappears immediately as he gets a thrash much more severe to his liking. Roland lends a helping hand during this particular evening session. Therese finally got her payback and so much more.

Emperor Charles announces the execution of Count Odo. It seems like Roland was working with the Emperor after all. The Emperor now rests his complete faith and confidence on Duke Rollo’s hand. Speaking of hands, “The Iron Hand of Frankia” is presented to Rollo, the new protector of the realm. The ceremony ended with Therese making an impression on the Emperor. Is it possible that now she is moving her way up to manipulate the highest authority? Roland and Therese are ambitious. I wouldn’t make the mistake of underestimating them.

Queen Kwenthrith…well, Kwenthrith approaches Judith and receive a much warmer reaction from her than expected. She begs for Judith’s help to flee Wessex due to recent developments. Judith agrees to help her. Afterwards, she confronts King Ecbert and the conversation takes a turn once he confesses his love for her; the love that trumps his beloved God himself. King Ecbert begs for Judith’s understanding and forgiveness. 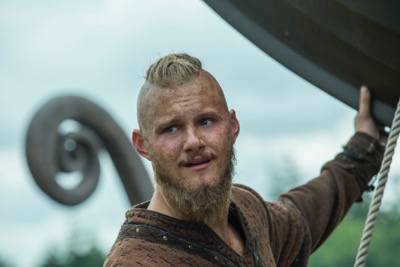 Back up, who just had a mini cardiac arrest right now? That Torvi has a very vivid imagination. That was not ok. He is called Bjorn Ironside for a reason. Erlendur better keep his bow and arrow in check. Not long after, we get another shocker. Unfortunately, it’s not a mere allusion this time around. Ragnar lets his addiction get the best of him. Yidu made the mistake by threatening Ragnar with his own secret. RIP Yidu, may the river drift you away from the savagery. 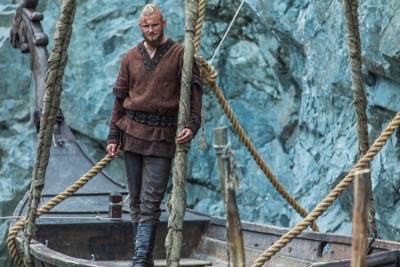 Kwenthrith fails at her first attempt at escape. She and Magnus are brought in front of King Ecbert, who attempts to explain why they can’t flee the Kingdom. Of course his interests serve him and him alone. King Ecbert plans on using Magnus as leverage if and when Ragnar returns to Wessex. Kwenthrith goes under lockdown. No doors or guards could keep this one in place. She goes after the big cheese himself, King Ecbert. As if this night wasn’t already grim, the last bomb drops when Judith literally stabs Kwenthrith behind her back before she manages to slice King Ecbert’s throat. Yikes! In not so many words, but I think Judith pretty much said “I Love You” back. Is it me, or did King Ecbert look totally turned on by it all?

For an episode without a battle, we sure did suffer a lot of loss. Things could only escalate from here. Hope all you Vikings are ready for next week. The French will get quite the surprise and we’ll see if Rollo could wave his hands to make it go away this time around.