Today was the main event of the D23 Expo, (at least for me)! It’s the Walt Disney Studios presentation where they trot out tantalizing glimpses of upcoming films. Such a tease! I’m here because I really wanted to see the presentation for the Avengers and the Muppets — and so was just about everyone else in the Western hemisphere. The line looped around the convention center several times so this was definitely the big draw of the entire convention.

The presentation kicked into high gear with John Lasseter emceeing the first portion of the day which focused on the upcoming animation projects. John was boisterous in his Cars 2 Hawaiiain shirt (tempered with a black sports jacket) and told the audience to “sit down” when the arena jumped to their feet to welcome him. 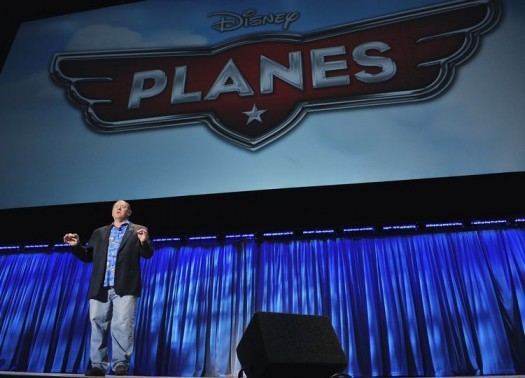 The first film of the day was Planes, which is the latest film from the “Cars universe” and is due in 2013. This story is about a crop duster named Dusty and how his adventures take him all over the world. He’s voiced by a charming Jon Cryer who came in person to tell us how “geeked out” he is to be working on this film. They showed a clip of footage which looks straight out of Top Gun (if Top Gun also featured a crop duster). 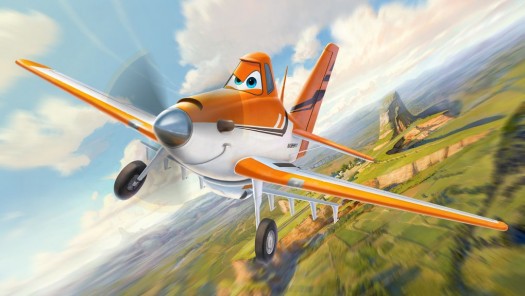 The next film was Wreck-It Ralph which is a look at the lives of video game characters when they are not playing in the games. Ralph is an 8-bit video game bad guy who really wants to be good. Although this film is slated for a November 2, 2012 release, they showed the first 4 minutes of the film which featured amusing guest appearances by other “bad guy” video games in this era, including the ghosts from Pac Man. Classic! 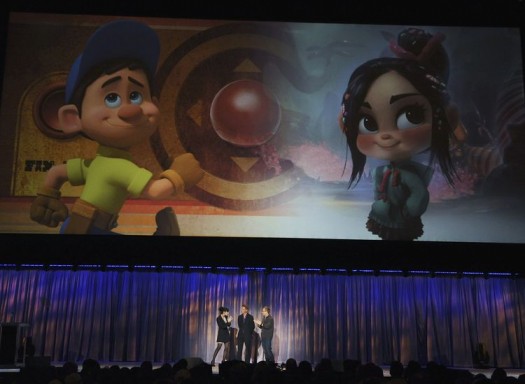 Two of the voice actors came to make their 2 minute appearance for this presentation. Jack MacBrayer, looking very tan, confessed that “my own voice irritates myself” so he wasn’t sure what he was doing in animation. Sarah Silverman also confessed that she “hates these films…I hate that they make me feel — I have a tiny, tiny heart.” 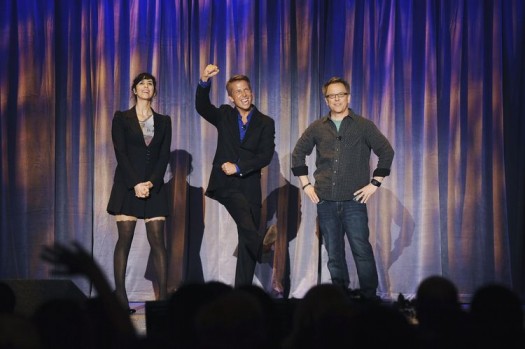 Of course many in the audience were waiting for the next film — Pixar’s Brave. What do you get when Pixar makes a film featuring the next Disney princess? I think we’ll all find out on June 22, 2012. This is Pixar’s first period piece and first “sort of fairy tale” as John Lasseter put it. They showed some test footage of Merida riding through the woods and then some additional footage of an archery tournament. Even as the producers kept emphasizing the rough nature of the clips, the footage looked beautiful and fun. There is also an incredible cast of voices and Kelly MacDonald and Kevin McKidd were on hand to say ‘hi’ and prove to all that they are indeed Scottish. 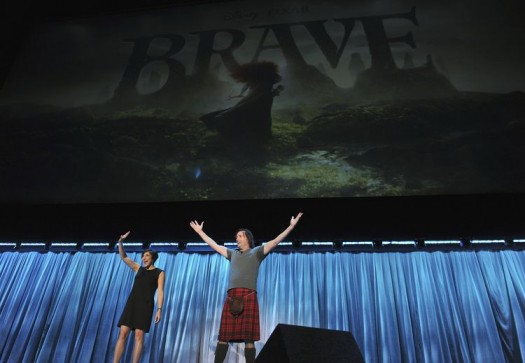 The final animated film was Monsters University — the upcoming prequel to Monsters, Inc which is due in theaters in 2013. This will be the story of how Mike and Sully met and became such good friends. Billy Crystal, accompanied by Mike and Sully, came in person and was greeted by a huge ovation. 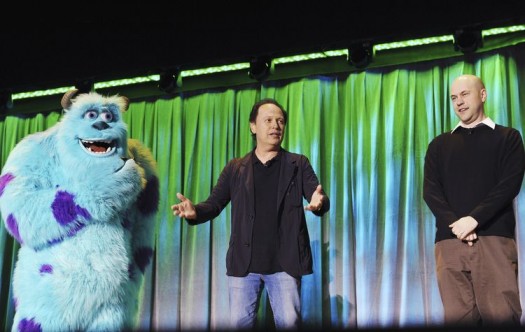 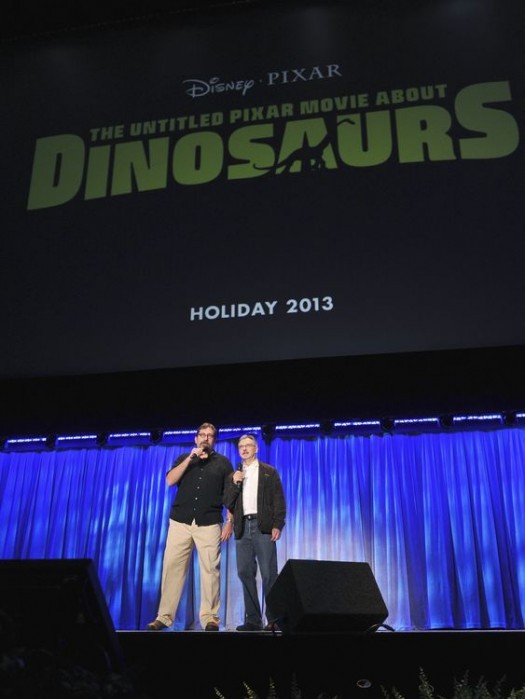 The dinosaur film is a story about what the world would be like if Dinosaurs hadn’t died out. They showed some concept art which was a dinosaur with a human riding on it. Interesting…Bob Peterson and John Walker will be working on this project and Bob had some fun plugging the film in the style of some voices he’s done for past Pixar films, including Dug from Up who said “Hello D23. My name is Dug and I have just met you and I love you….Squirrel!”

The movie about your mind has something to do with understanding why something might get stuck in your head or how your brain decides something else. I’m really not sure what this is going to be like, so may be there is some additional work on the brain needed…(or just on mine!)

With that said, there was an amazing array of Pixar talent on stage as they celebrated 25 years with a confetti cascade and Luxo Jr. cupcakes for everyone. Yeah Pixar!!

After that, the presentation switched to live action and there was considerable time spent on John Carter. This March 2012 film is an adaptation of the Edgar Rice Burroughs book which is about a Civil War era man who finds himself on Mars and is caught in a war there. Taylor Kitsch (looking good with the short hair, but very uncomfortable on stage), Lynn Collins (very nervous) and Willem Dafoe (at ease and personable with the crowd) were in person to say a few words. 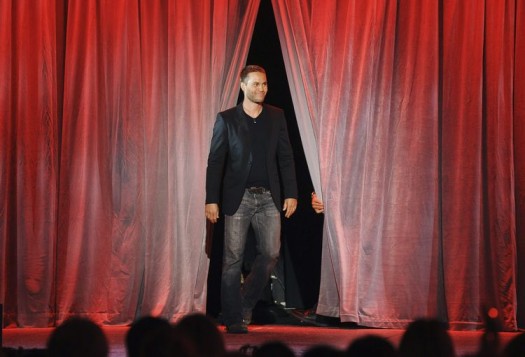 This presentation actually got the most floor time as Disney probably felt the need to generate more buzz for this film. And really, the four different clips they showed looked interesting and director Andrew Stanton’s passion for this project is very catchy. 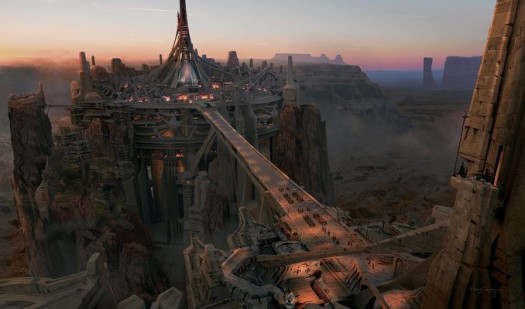 The next film was Tim Burton’s Frankenweenie which will come out next October. The stop-motion animated film uses the vocal talents of “the friends of Tim Burton, minus Johnny Depp” which includes Martin Landau, Winona Ryder and Mike’s vote for the friendliest person on earth, Catherine O’Hara. 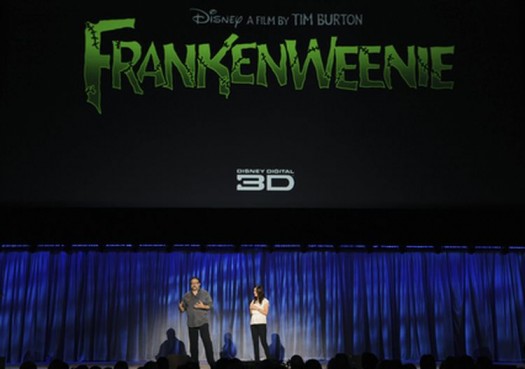 They also brought out Sparky who is the title character — he’s “four inches tall and made of Silicone, just like that girl from Jersey Shore.” Ouch! Sparky is, however, adorable. This is a Tim Burton passion project and should be great fun. 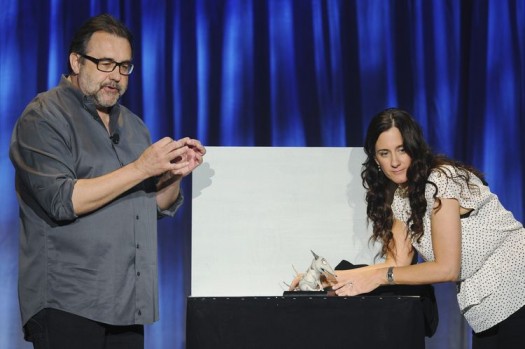 Next up, the ever-adorable Jennifer Garner came to talk about The Odd Life of Timothy Green which is about a couple which makes a wish about a child they cannot have — and then a strange boy enters their life. The trailer for this movie shows a lot of heart and has the potential to be a real tear-jerker! 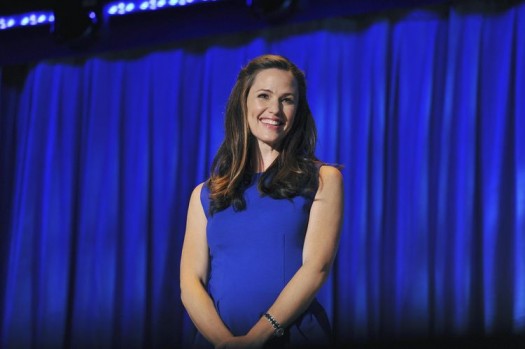 Although filming began a few weeks ago, there is some behind-the-scenes footage for Oz the Great and Powerful which is the story of the man when he first arrived in Oz. This has a terrific cast with James Franco, Rachel Weisz, Mila Kunis and Michelle Williams. There are a lot of Oz stories coming out so note that this one is slated for a March 2013 release. Yep, lots of time before this one will be ready!

The next film, however, is coming out pretty soon. It’s the Muppets! WIth the very special guest stars Jason Segel and Kermit the Frog! Yeah!!! 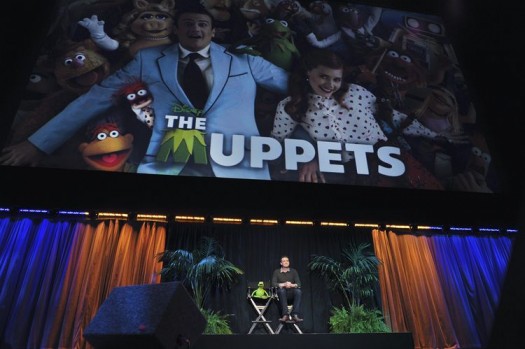 They were later joined by Miss Piggy who arrived on a motorcycle (a pig on a hog!) and a couple of clips which included the Muppets with a song. It was very cute and does take the Muppets back towards the classic Muppet vibe like the Muppets Take Manhattan. Ah, good times!! 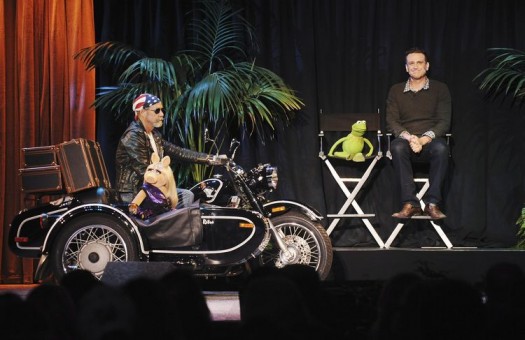 At this point, the audience is on pins and needles for the Avengers as our time is nearly up and we’re finished with the Disney live action projects. 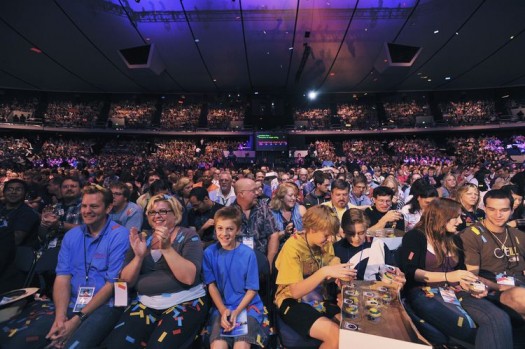 Everyone is almost leaning forward in their seats when they start to show clips from Disney Nature’s Chimpanzee.

I know that the film looks very interesting, but we’ve been sitting here for over 3 hours and we are now officially DYING for the Avengers to start. The applause for Chimpanzee is the text book definition of “polite applause.”

And then, finally!, Kevin Feige from Marvel Studios takes the stage.

The Marvel presentation opens with a montage of clips from the 5 Marvel Studios films (Iron Man 1 & 2, The Incredible Hulk (Edward Norton edition), Thor and Captain America). The clips are focused on the bits that connect all the films together including the mention of experimentation on soldiers in Hulk that links the film to Captain America.

Kevin comes back out and introduces the footage from the upcoming Avengers film which is in its last 2 weeks of principle photography. (May 2012 release!!)

The scene begins with Loki locked in a containment cell aboard the helicarrier. Nick Fury is coldly showing Loki how the container will drop 30,000 feet below if he tries to escape. Loki then begins to taunt Nick about having had the glowy cube thingee and then losing it (my words, not Loki’s). All the while, some other Avengers are watching the two of them from another room, including Black Widow, Maria Hill, Hawkeye, Thor, Captain America and Bruce Banner. At the end of Loki’s taunting, Bruce looks up for the monitor and says “he really starts to grow on you, doesn’t he?”

Then they show another scene with Tony Stark talking to Loki. Tony is saying that Loki has attracted the attention of “master assassins (cut to footage of Hawkeye and Black Widow shooting things), a demi-god (cut to Thor leaping through the air with Mjollinar) and a living legend who lives up to the legend” (cut to Captain America.) Loki says “I have an army” and Tony replies “well, we have a Hulk.” And then we see the first shot of Hulk who lets out a mighty roar. (Hulk is just like the concept art poster that Marvel gave out at Comic Con).

And then Kevin welcomes many of the Avengers to the stage as the others are still filming. Tom Hiddleston (“the main villain”), Cobie Summers, Jeremy Renner, Scarlett Johansson, Chris Hemsworth and Robert Downey Jr all take the stage! 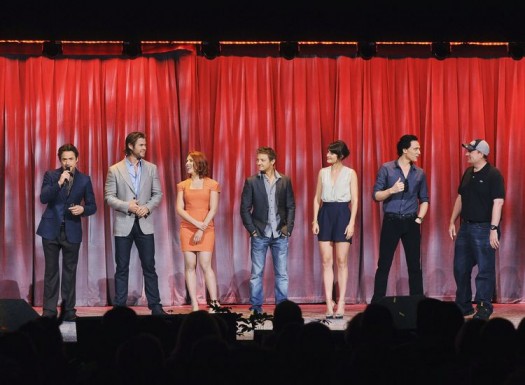 The crowd is on its feet cheering when Robert Downey gets the microphone and asks “Do you want to see the footage again?” 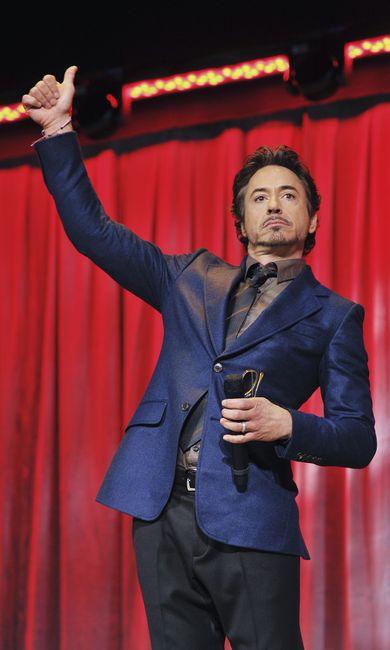 After we roar our approval, Robert nods and replies “OK, see you next year!” and leaves the stage.

They roll the footage and we can see the rest of the Avengers (and Tom), stick around to see the footage again. When the lights come up, they wave and then head off stage. 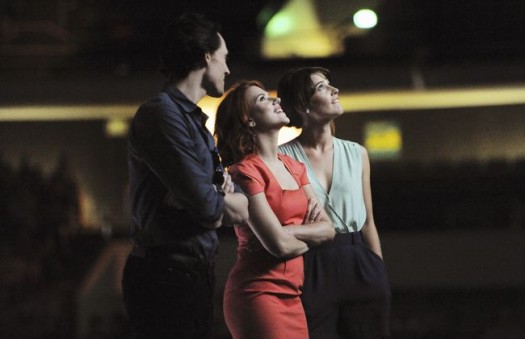 Wow!! They bring in so much talent and they are there for window dressing. Really?

Overall, the whole morning was really fun with lots of interesting clips and sneak peeks. I’m just disappointed that the Avengers bit was anti-climatic since I’ve seen Robert and Chris hold the stage really well.

It’s surprising that there is so much talent in the room, and they don’t really get to do much. It may behoove Disney to break this into two panels and give the actors a little more to do next time.

After sitting through the nearly 3 hour panel, my top picks are Avengers, Muppets, Frankenweenie and Brave while John Carter looks a lot more interesting. Timothy Green also looks like it could be really great and Wreck-It Ralph is a fun idea as well.

In the immortal words of Cookie Monster in The Muppets Take Manhattan: “Oh boy! Me can hardly wait!”