The era of hand drawn animation was, as any film buff knows, ushered out for digital animation. The film given the unfair distinction of being the final nail in the coffin was Walt Disney’s Home on the Range.

Starring Roseanne as prize winning cow Maggie, Home on the Range follows three cows trying to save their dairy farm which has fallen into financial crisis. The owner of the farm is Pearl and she needs to raise $750.00 to avoid foreclosure and having all the farm animals sold off at auction. The two other cows at the farm are Grace voiced by Jennifer Tilly and the uptight pessimist cow Mrs. Caloway voiced by Judi Dench. The all head off the farm to try and capture a cattle rustler named Alameda Slim who is voiced by Randy Quaid. 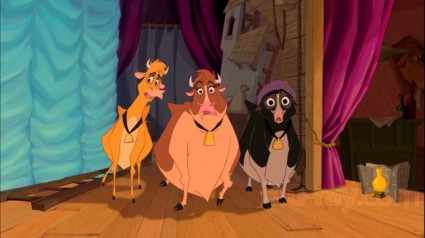 That’s part of the problem with Home on the Range, it’s all too easy and simple and paint by numbers. You can see all the plot points before they happen and everything wraps up all neat and tidy in true Disney fashion. 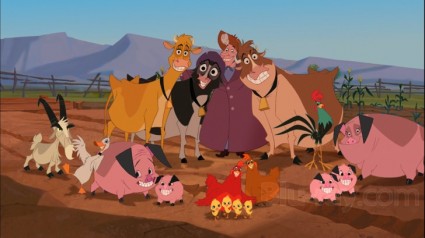 However, if you come into Home on the Range with little expectations you probably will be pleasantly surprised to find it’s not as bad as you were told it was. Plus, the fact that Disney has re-embraced hand drawn animation helps make Home on the Range slightly less dated. The Winnie The Pooh movie and Princess and the Frog were both at least partially hand drawn and were released within the past couple of years.

Alan Mencken does help put some sparkle and zing into the film with the songs we wrote. Even though Home on the Range isn’t a musical the songs included in the film help bring about an emotional chord in the viewer. K.D. Lang has a great rendition of Little Patch of Heaven, and even… Gulp… Randy Quaid sings a little ditty. 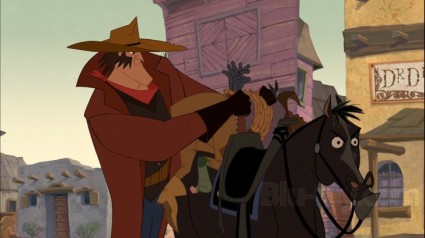 Blu Ray is a wonderful medium for animated films. I swear every time I see an animated movie on blu ray I fall in love. The colors for this are especially bright and sparkle. The audio has a really great mix and the dialogue doesn’t overpower the film.

On the special feature front there are a few making of featurettes, and some deleted scenes. As is the standard for Disney packs there are some fluff features thrown in but generally speaking for a smaller Disney animated film they try and put as many features on as they had already made.

Home on the Range is available now on Blu Ray combo pack! 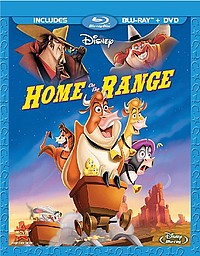