It’s hard to believe that it’s been ten years since Walt Disney’s Treasure Planet has been released in theatres! I was a tad surprised when I saw the box art, I was like 10 years, that means I’m getting old. lol… In fact, I think it’s been about that long since I’ve actually sat down and watched the movie.

I’m happy to report that it hasn’t changed all the much since it first graces the silver screen. Joseph Gordon Levitt voices the lead character Jim Hawkins and brings a youthful innocence to this boy looking for adventure. When Jim stumbles onto a treasure map, it brings chaos to Him and his mother voiced by Laurie Metcalf.

Once Doctor Doppler, David Hyde Pierce, decides to fund their adventure the film really comes into it’s own. The best character is easily Captain Amelia voiced by Emma Thompson. Captain Amelia leads the expedition and is in charge of the crew. Emma Thompson brings a sense of fun and creates a fun and interesting character. No small feat especially for an animated film. 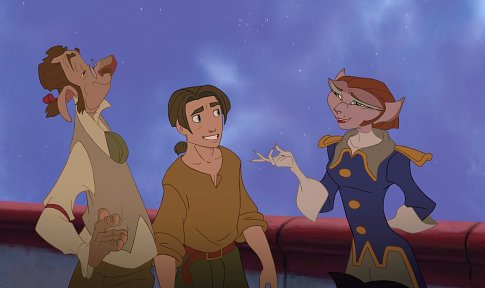 Once on board the ship there is mutiny afoot and those pesky crew members are up to no good. However through it all Jim learns the meaning of friendship and discovers a treasure greater than he could have ever imagined!

The animation has never looked better. On Blu Ray this film literally sparkles off the screen. In fact I remarked to myself that it would have been great to see this movie in 3d because I’m sure it would have been amazing. The visuals are stunning especially considering that this space adventure was done 10 years ago before the heightened dawn of the digital animation age. 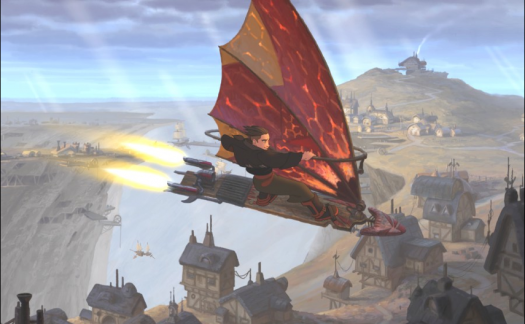 The only thing that slightly ages the film is a few random jokes such as the flatulence creature. I think jokes like that were dated back when the film was first made.

Still this animated adventure is definitely worth picking up. Your kids will probably think it was released last year not 10 years ago and kids of all ages will fall in love with the eccentric characters and fun space adventure.

Treasure Planet is in stores now! So pick up a copy! 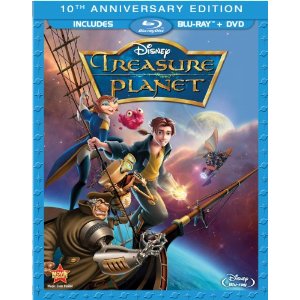