Being a child, raised in a certain era, one can’t help but have a fondness for the early days of cable reruns and the films that played over and over on networks like HBO, USA and TNT. It was during that time of course that horror films were introduced to me, along with sci-fi and other cult films. There are films that I have a fondness for, that others have undoubtedly dismissed, rather dismissively in my opinion. 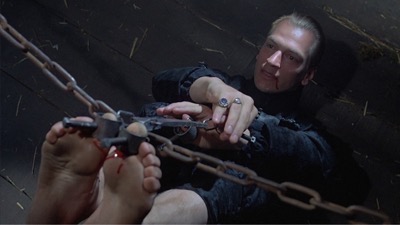 One of those films, or sagas and trilogies is Warlock. The three film series is out on a brand new edition thanks to Vestry Video and let me tell you, the high definition upgrade is worth the wait. Like many films of the late 1980s the quality varies movie to movie, but Warlock is one of the best horror franchises out there, and should be considered for a reboot.

It’s 1691 Massachusetts and a witch hunter named Giles (Richard E. Grant) has at long last captured a potential Warlock (Julian Sands). He’s locked in a tower and Giles taunts him like anyone would when you finally catch someone you’ve been hunting for what seems like forever. Then the skies open up, a portal descends and poof the Warlock is gone with Giles in tow. 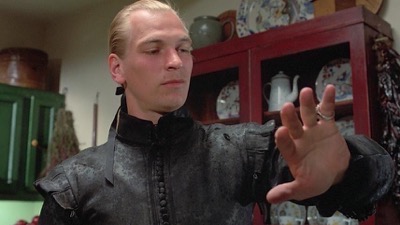 They both land in Los Angeles in the late 1980s with the Warlock landing first giving him a bit of a head start. He crash lands through the window of Kassandra (Lori Singer) and Chas (Kevin O’Brien). The phone is out and so they, like any good person of the 1980s would do, bring the Warlock upstairs to get better. In the morning Kassandra leaves, and Chad is shuffled off this mortal coil thanks to the Warlock.

The Warlock then finds out that his mission in the 1980s is to reassemble an ancient grimoire, that will assumably bring about death and armageddon, although the consequence of him completing his task isn’t fully revealed one can only believe it would be bad. The Warlock would then become the new Rosemary’s Baby. 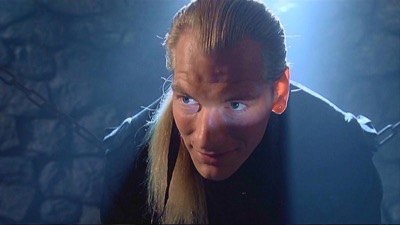 This leads us down the rabbit hole of the Warlock series. The two follow up films really deviate a lot from the original and basically don’t have a lot to do with each other, except in name only. In Warlock: The Armageddon, the Warlock returns once again played by Julian Sands to go on a hunt for Druid stones and bring good old Satan into our world. It doesn’t happen of course and we’re all safe from Beelzebub.

In the third and final film, Warlock: The End of Innocence, we follow Kris (Ashley Laurence) a college student who gets a large inheritance suddenly. She heads to a large abandoned mansion with her cannon fodder friends. 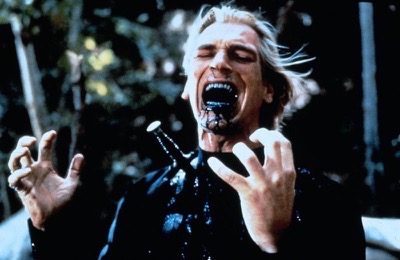 It’s really to the original films credit that the series has had the longevity it has now. It’s a cult classic and one that after many years away from the repeated viewings of my past, still conjure up awesome memories. Julian Sands is perfect in the title role and it remains a staple and remnant of the late 1980s.

The high definition transfer of each film does vary, but the upgrade is well worth it. The original film fares the best with age. The special effects tend to lose their punch with high definition, the flying sequences look especially dated, but the details are very good and I haven’t seen Warlock look this good in perhaps ever. 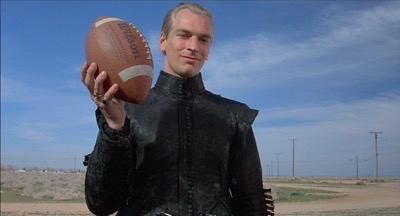 The second and third films, don’t fare as well with some grain and loss really filtering in on the darker scenes especially. The colors on both films are a little dull (this is especially evident in the second film) and the landscapes and colors don’t look the best at times. Still, the detail’s are excellent and the high definition transfer is still leaps and bounds better than any version I’ve seen previously and is well worth the upgrade. 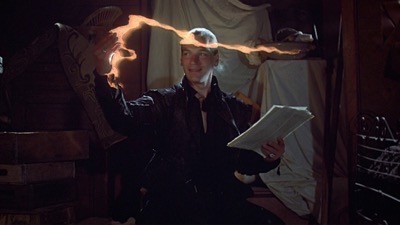 The special features included are abundant especially on the first film.

There is a new audio commentary with director Steve Miner and an isolated score sections which feature audio interviews with Author Jeff Bond.

There is also behind the scenes footage, vintage interviews, vintage make up and effects featurettes, the theatrical trailer, video trailer, still gallery and TV Spots.

The third film is the weakest in terms of special features as expected. Still, it does have behind the scenes footage, vintage interviews with the cast, the trailer, video sales promos and a still gallery.

Overall, I’m so thankful that Lionsgate and Vestron is taking a chance by putting out niche horror titles like Warlock. It’s a treat to see these older cult classics look this good and this collection will find a good home in anyone’s collection. I think, if you’re anything like me, just watching the original film will bring back so many memories, that’s worth the price of the set alone!

Warlock Collection is out now on Blu-ray!