Home / Fanboying! • Q and A / Marie Heads To The Way Way Back After Meeting The Descendant Writers Nat Faxon And Jim Rash! Q And A Goodness! Autographs! And The Cutest Photo Ever!

It’s funny how The Way Way Back has jumped onto my radar as of late. First it stars one of my favorite people ever, Ms. Toni Collette and two Marie has done this amazing article for it!

Marie attended a screening and Q and A with writers Nat Faxon and Jim Rash who wrote The Descendants. And I have to tell you… Marie got the cutest photo with them… EVER! It’s adorable! I love it!

For a few weeks now, Nat Faxon and Jim Rash (Academy-award winning writers for “The Descendants”) have been touring the country promoting their new film, “The Way Way Back”. Of all the movies set to be released this summer, I’ve been looking forward to none more than this.

Also directed by Faxon and Rash, it tells the story of an awkward boy named Duncan whose mother Pam (Toni Collette) is dating a seemingly ok guy named Trent (Steve Carell). But Trent’s outward appearance proves to be just that, as we see him take every opportunity to passively belittle and oppress Duncan. Traveling to Trent’s vacation beach house for the summer, Duncan finds it difficult fitting in with the beach crowd, and watching his mother and Trent together. Duncan escapes further inland where he stumbling upon the Water Wizz water park. There, he befriends the fun and quirky Water Wizz staff, led by the hilariously charming Owen (Sam Rockwell). Faxon and Rash also wrote parts for themselves as water park employees. 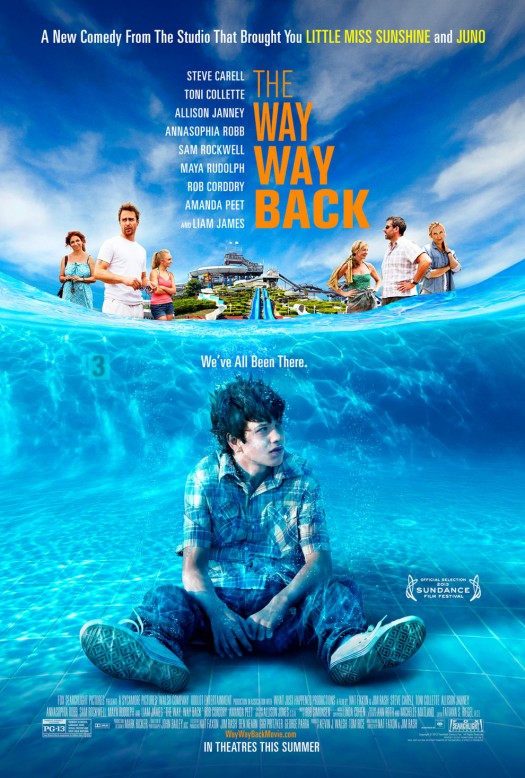 When I first learned about the promotional tour, which involves screenings and Q & As at each city they visit, I was thrilled to find out that they’d be making a stop in Phoenix! Through a wonderful friend I secured my passes, and waited with anticipation for the day to arrive. When I got to the theater that day, the person checking people in told me that they were strictly enforcing a no-cell phone rule – meaning that I would either have to return my phone to my car, or else check it in before entering the theater. Oh no! I really wanted to get a photo with Nat and Jim, and assumed this no cell phone rule applied to cameras as well (a bit presumptuous but I didn’t want to risk it). So I decided to leave my phone and camera in the car and returned to the theater. As I entered, I was met by a security guard who swiped a metal detecting wand around me; so yeah, they were serious about no cell phones. I met up with some friends, settled in and watched the movie, which I really loved!

After the lights came on, I turned and could see Nat and Jim standing at the back of the theater ready for the Q & A. Some Q & A highlights:

– The title “The Way Way Back” comes from what they call the rear-facing last row seat of a station wagon, which is where Duncan sits. The title also has a symbolic meaning for one of the characters;

– It was an 8-year process to get the film made;

The role of Betty was written specifically for Allison Janney, who plays the sassy neighbor;

– The role of Owen was inspired by Bill Murray’s character in Meatballs;

– They gained their inspiration for the story from both their childhood summer trips on the east coast, and their love for water parks;

– The opening scene was an actual conversation that Jim Rash had with his stepfather;

– Their directorial influence was primarily John Hughes because of his drama-comedy work, although they looked to other coming-of-age films like Almost Famous;

– There was a deliberate effort to make the film have a timeless, nostalgic feel, which played into the production design and songs featured throughout the film.

After the Q & A, I made my way up to the front, where Nat and Jim were meeting a handful of people who had approached them. It made me happy to see how gracious they were to the waiting fans. I went up to Jim first and asked him to sign a small print of the early concept poster, which he happily did! 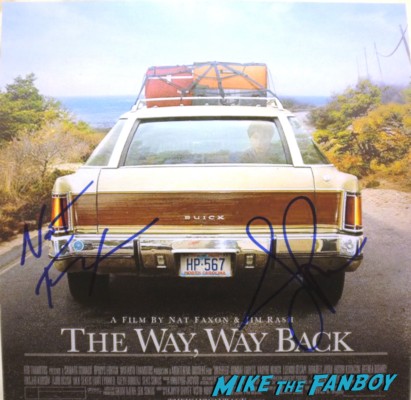 I also got to take a couple of minutes to tell him how much I loved the episode of Community that he had written this past season. No exaggeration, it was my favorite episode ever, and Dean Pelton is my favorite part of the show. Jim was so kind taking the time to chat. I then waited for Nat to finish talking to a couple and asked him to sign my print as well. I told him that his was my must-see movie of the summer and it did not disappoint! He smiled and thanked me, and that was that…or so I thought.

Just outside the theater door a girl handed my friend and I a mini poster as we were exiting, and so I turned to my friend and said she should get them to sign this for her too! After some gentle nudging, we went back in. A bunch of others had the same idea, as there was now an orderly line of about a dozen people or so up the aisle waiting with mini posters in-hand. Some had also retrieved their cell phones from check-in and were taking photos with them too. My friend eventually made it to the front of the line and got her poster signed, and then we stood and chatted for a bit in the lobby. I watched as the remaining people exited the theater followed lastly by Nat and Jim. They had stayed until they met every person waiting! A studio rep took some fun photos of them inside a lobby display of a station wagon cut-out and that’s when my friend pulled out her camera and snapped a couple of photos of them too.

Wait …she had a camera?! 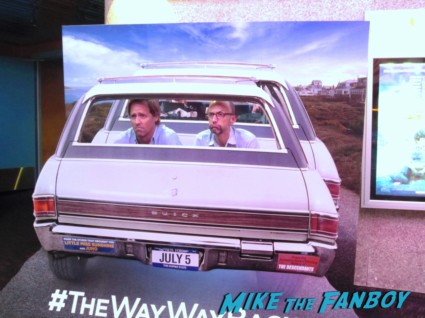 Afterward, I had a bit of a fangirl freak-out which did involve some jumping up and down in the middle of the lobby. But no matter because I got my photo — hooray! 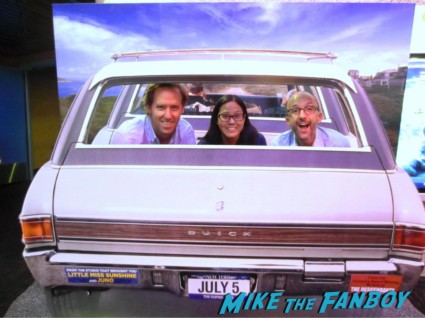 I just wanted to share how awesome Nat Faxon and Jim Rash were to their fans in Phoenix! Please see “The Way, Way Back,” coming out July 5th! It’s truly a wonderful film, with a phenomenal cast, and will win you over with its humor and heart! Thanks for reading!