Why You Should Give Welcome to Marwen a Chance

Once in a while there comes a film worth standing up for and for me that film is Welcome to Marwen. As an avid movie goer, it’s tough to be supportive of a film that received mostly negative, though I’d say in this case more middle ground reviews: 32% positive on Rotten Tomatoes, a score of 40 (out of 100) on Metacritic, 5.9 rating (out of 10) on IMDB, and 56% positive Rotten Tomatoes audience score.

Let me back track for a moment and note that I am a huge fan of the source material. I stumbled upon the 2010 documentary “Mawencol” a few years ago and could not get it out of my head. I later purchased the 2015 hard cover book “Welcome to Marwencol” and read it cover to cover as well as anything available the internet. After learning that there was a feature film in the works, I was excited, but also skeptical, as there aren’t many successful feature films inspired by documentaries. I can’t fathom how hard it was to target an audience for this film, let alone market it to anyone who hadn’t seen the documentary. It’s impossible to summarize what this movie is about without spoiling what gives it its heart. But, in an effort to generate an in home audience, here goes.

In 2000, Mark Hogancamp was attacked and brutally kicked and beaten by five men outside a bar in upstate New York. He barely survived, suffering severe brain damage, and underwent extensive physical therapy, re-learning how to walk, feed and dress himself, and regain usage of his fine motor skills. This meant he could no longer work as an illustrator. He also lost his almost all memories from before the attack, including a previous marriage, time served in the Navy, and the very reason he was attacked in the first place. Mark let slip to the men he had been drinking and chatting amiably with previously that he enjoyed wearing women’s shoes some times in the comfort of his own home. Queue the bigotry.

Just as Mark was making progress in the hospital, his insurance ran out and that meant no more rehab. So, he invented his own therapy. Prior to the attack Mark enjoyed painting miniatures models, but his hands now shook uncontrollably making that old hobby an impossibility. Instead, he switched to 6th scale models and built a fictional Belgian town set during WWII named Marwencol in his back yard. He used army figures and Barbie dolls as characters in the town and created a heroic alter-ego fighter pilot named Captain Hogie. This allowed Mark to cope with his severe PTSD. He could take out his anger on his attackers by killing their Nazi alter-egos that tormented his town. He would take photographs of these dolls while posed in imaginary situations within Marwencol. They are so lifelike and haunting that one particular photograph was mistaken for a real WWII photo. As all this was happening Mark returned to wearing women’s shoes in the comfort of his home. Try putting that in your marketing campaign! Now, on to the actual film.

Rather than rehash the documentary scene by scene, director and co-writer Robert Zemekis (along with Caroline Thompson) chose to mix real life with the imaginary, tracking Mark’s day-to-day ups and downs in the real world alongside his fabricated village. Zemekis uses clever and often violent cutaways to the animated counterparts of the people we meet in Mark’s real life.

The fictional Mark is played by Steve Carell who gives a nuanced performance as the damaged man who is both likable and fragile. His Hogancamp is a sentimental victim-oddball who the audience finds easy to love. Zemekis allows the real life drama to spill over into the fictional Marwen (there’s a plot reason for the name change). For example when a new neighbor named Nicol moves in, played with compassionate charm by Leslie Mann, Mark finds a new friend. He’ll later mistake that friendship for something romantic in a heart breaking scene played with quiet humility by Carell. Nicol has a brutish ex-boyfriend named Kurt who keeps showing up to harass her, and Mark re-imagines him as an SS officer his alter ego Hogie must defeat. Captain Hogie is everything Mark wishes he could be. The village of Marwen became his escape, as Mark’s made up fantasies are a replacement for the life story he’s lost, creating new memories with his dolls; new memories where he can be the hero and one where he is saved by the loyal beauties who stay by his side. 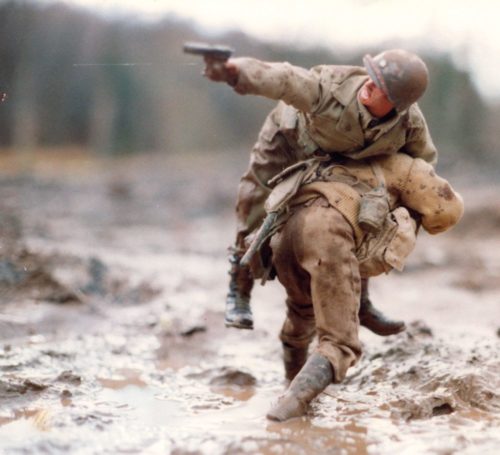 One of the greatest joys of watching the documentary is listening to the real Mark set the scene and narrate what is happening as a series of his still photographs are shown on screen. His imaginary stories play like mini movies and I agree with Zemekis’ decision to bring them to life as such.

If all of this sounds strange and unusual, it’s because Welcome to Marwen is strange and unusual. The film has its flaws and short comings, but that doesn’t make it as unsuccessful piece of storytelling. It is odd indeed, but certainly never boring and it tugs the heart strings without being sappy. At its core is the structure and the momentum of a traditional movie about an underdog who has suffered in unimaginable ways but finds a way to cope along with a little help from his friends. Although Mark’s story was created from such a dark and ugly incident it’s ultimately an inspirational and uplifting one about the human spirit. Therein lies the heart of the film.

Now, am I expecting anyone who hated the film to read this, watch it again, and become a believer? Of course not. I am hoping, however, that if you wanted to see it, but were dissuaded by the negative reviews, you’ll give it a try and decide for yourself.

Welcome to Marwen is available now on digital and on Blu-ray April 9th. 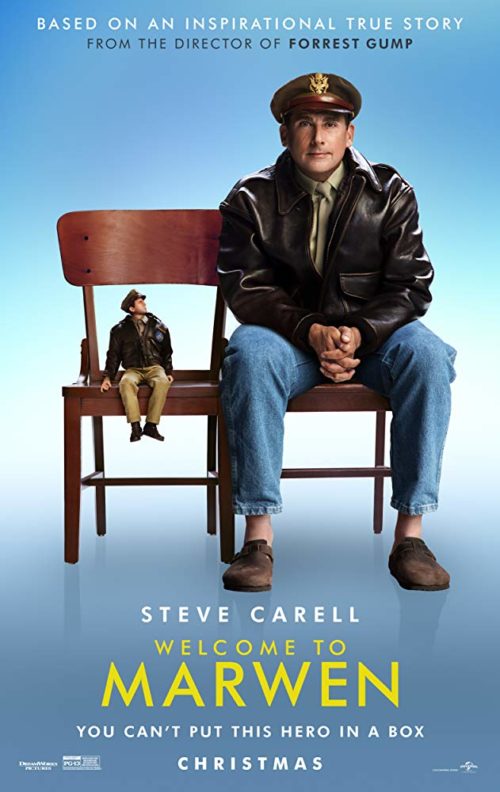