I freely admit, I love comedies. If I had to choose a genre of film, comedy will always rise to the top simply because a good comedy can put you in an amazing mood and make you smile. Even comedies that one wouldn’t consider “high class” are fun, I call them 1980s throwback comedies, the high concept, over the top concepts that the actors play off. 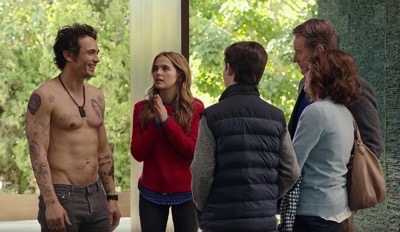 In the new comedy, Why Him?, the 1980s Throwback concept is in full swing. Ned Fleming (Bryan Cranston) is a typical suburban sitcom Dad. He wants to best for his family, especially his daughter Stephanie (Zoey Deutch). It’s much to his chagrin then when Stephanie wants to bring her family to meet the new man in her life, Laird Mayhew (James Franco). Laird is a tech entrepreneur who is a big doofus, he drops the F-bomb constantly, is a horndog and has little to no social skills. 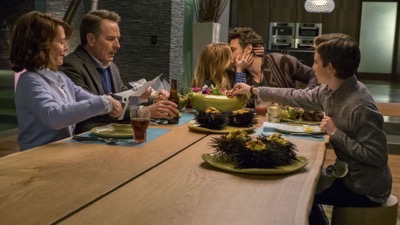 The family heads out to California for the holidays at Stephanie’s behest to meet Laird including Ned, his wife Barb (Megan Mullally) and his son Scotty (Griffin Gluck). The holidays in sunny California are an interesting change of pace rather than seeing the snowy Midwest and stripping the film of the Norman Rockwell-ness of it all. 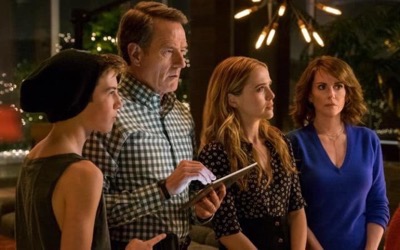 Laird and Ned of course don’t see eye to eye and the film sets out on its course of having Laird trying to win the Flemings over. Through this all, Ned is trying to shield the family from the news that his business is tanking, just as he see Laird spending money and being a young business tycoon. Laird on the other hand wants to ask Stephanie to marry him over the holiday and wants Ned’s blessing. Ned however, isn’t for this nuptial and tries to convince his daughter that Laird is not the guy her for. 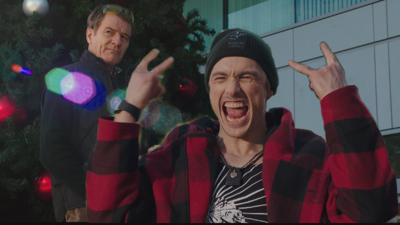 Why Him? isn’t going to win any awards, and anyone that thought it would must not have seen a film in 20 years, but that doesn’t mean that it’s not a fun. Bryan Cranston and James Franco both throw themselves into their roles with gusto and are a lot of fun. Franco in particular is having a ball as Laird and he rises above the script which doesn’t do him any favors. 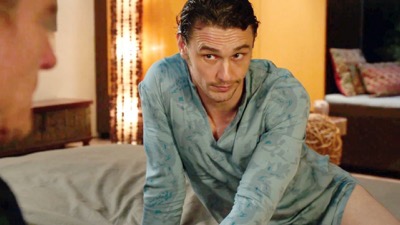 Some gags work really well, like having the Jarvis-esque Justine (voiced by Kaley Cuoco) run the house and who isn’t afraid to give her opinion or talk back to the house guests. Megan Mullally’s relationship with Laird and the Interns are really spot on. It is a shame then that the script wasn’t a bit more sharp. The film devolves into low brow comedy and it could have benefited from trusting the amazing cast they assembled instead of swearing every other word. I’m not a prude by any means, but that does tend to grate after a while. 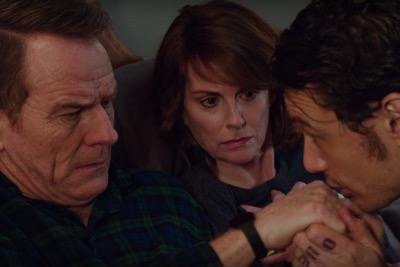 Why Him? arrives on Blu-ray and 4K high definition thanks to 20th Century Fox Home Video. With comedies, I sometimes feel like they are actually a better fit for home viewing rather than the cinema experience and that’s the case with Why Him? The film is perfect for a movie night with friends and the transfer here is excellent. The 4K, while I would normally reserve this format for action films, gives the film an extra pop of color and brings out even more definition than it would on blu-ray. The sunny California weather is just that little bit brighter and the details hyper crisp. Even when in Laird’s mansion, every nuance can be seen on screen. The picture quality is extraordinary! 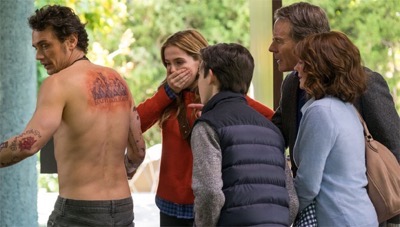 Special features on this release include: (The audio commentary track is on the 4K Ultra disc the rest of the features are on a separate blu-ray disc)

• Why Him? Gag Reel – This reel runs about ten minutes in length and is worth a spin. There are some moments that made me actually laugh out loud.

• 47 Minutes on the Can – this is a “special” look at the filming of the toilet sequence in the film.

• Why Gustav? – A look at Gustav’s best moments from the film.

• Deleted Scenes – There are almost a half hour of deleted or alternate scenes.

• Gallery of still photos and the Theatrical Trailer. 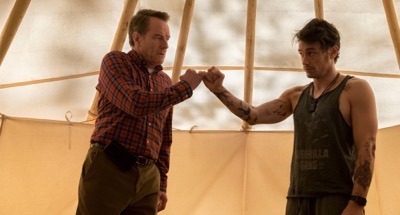 Overall, I enjoyed Why Him? way more than I anticipated. The winning performances from both leads really overcame the razor thin plot. The cast really jelled and while it’s a predictable film, that really doesn’t detract from the fact that when you see it, you can’t help but laugh at some parts and smile at others. That’s the beauty of comedy, if you smile and laugh it’s done right and you can’t really ask for more than that.