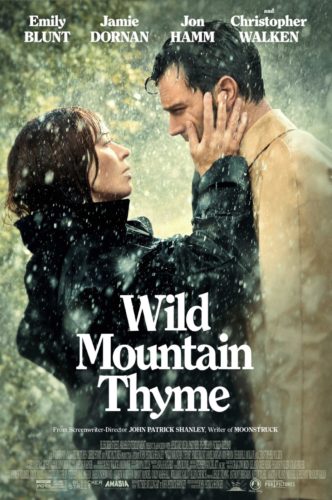 As long as she can remember, headstrong Rosemary Muldoon (Emily Blunt) has been obsessed with capturing her neighbor Anthony Reilly’s (Jamie Dornan) heart. Despite the obvious affection and attention, Anthony’s been completely oblivious and a disappointment with his lack of ambition to his father Tony (Christopher Walken). Upon learning his father Tony is not leaving the family farm to him, but selling it to his American cousin Adam (Jon Hamm), Anthony is finally motivated and chases after his dreams in this romantic drama set in the Irish countryside. 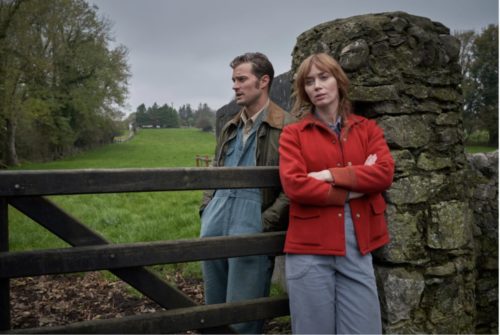 Over his career, John Patrick Shanley has made us laugh (“Joe Versus The Volcano”), made us cry (“Doubt”) and done both (“Moonstruck”), but for his third directorial effort, “Wild Mountain Thyme,” he’s chosen a sweeping romantic comedy based on his play “Outside Mullingar.” The film features some stunning cinematography beautifully capturing the Irish landscape and makes it feel like a throwback to classic cinema. It’s classic charisma certainly echoes John Ford’s “The Quiet Man,” but sadly is similar to “Leap Year” and other generic romantic dramas perfect for date night.

Although wonderfully cast on paper with Emily Blunt, Jon Hamm and Jamie Dorman, the film’s flimsy chemistry and atrocious accents make it definitely difficult to fully appreciate. Dorman’s brooding presence and accent are adequate, but considering Blunt and Christopher Walken’s characters have lived in the same area/next door for decades makes the “Oirish” accents unbearable. Whoever oversaw the egregious elocution lessons needs to give back their paycheck. If this was a cliché comedy wanting to mock Ireland, maybe Christopher Walken’s Irish accent could conceivably work if the goal is to be over the top. But beyond a casting coup, Christopher Walken is dreadful. The same can be said about Emily Blunt, nothing personal about her performance, but she seemed like a cheap imitation of Maureen O’ Hara. Maybe it was the lack of genuine Irish actors, especially in principle roles, that made it a disservice? 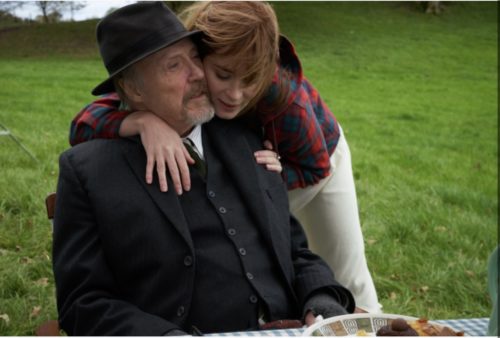 If this was 60 years ago, this would be a perfect starring role for Maureen O’Hara or if Saoirse Ronan was a decade older, either one would’ve pulled off Rosemary remarkably. Even getting someone like a Brendan Gleeson, Liam Neeson, Stephen Rhea, etc. would have been a better casting decision over Walken, who singlehandedly made the movie unintentionally laughable. In the opening moments, there is sweeping cinematography of Ireland before Walken joyfully proclaims in a voiceover with his “Oirish” accent, “Welcome to Ireland. My name’s Tony Reilly and I’m dead!” If you’re drinking anything I guarantee you spit it out and are deeply disappointed the remaining 90+ minutes aren’t as funny. Truthfully, the overwhelming amount of stagnate Irish stereotypes makes “Waking Ned Devine” look like “In The Name of The Father” or a “Lucky Charms” commercial brought to life within a romantic movie. Unless your dragged into a date night movie experience, be prepared to grab a pint and don’t be surprised if you start mimicking the movie with your own “Oirish” accent.