William Shatner has played a variety of insane parts but of course he’s most and best known for Star Trek. He has written a new book about his relationship with Leonard Nimoy.

Paul headed down to William Shatner’s book signing at the Grove’s Barnes and Noble and did a great recap!

Arrived at 5 a.m. and put down a folding stool down… 1st in line!

Went to get coffee AKA “grande Americano” at the Starbucks in the farmers market, I came back and discovered the co-owner of Hollywood movie posters was sitting on my stool! We had a good chat about random Trek stuff and the coming and going rain bursts. More Trekkies arrived around 6 and it wasn’t as crowded as I expected.

I then met up with the minds and hands of “the nerd soapbox” and mtf readers John and Stephen helped pass the time.

Then the doors opened and I attempted to get 2 books but the clerk announced only 1 per wristband (only 150 wristbands issued).

I then proceeded home to take a 4 hour nap with way too many interruptions… gah (I work graveyard) I proceed back to the grove around 5pm and ran into John and Stephen and discussed the upcoming event and the course of action. 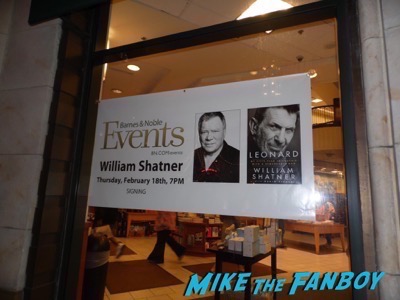 Shatner was personalizing, I thought “live long and prosper” would be ideal… But they disputed saying he would only do names.

Ok so flash forward to 6pm and there is a line of 100 people ready (take note b&n not that you care, numbering wristbands is professional not alphabetizing) so I was 50ish in line and dealt with the most militant security (Monument I think was the company) mainly the bald guy in the photos who had the nerve to talk down to the fans… kinda “I-want-this-to-be-over-so-I-can-whine-at-the-bar-about-it-attitude.”

I was asked 6 times in 30 minutes about personalization, then the handler announced a list of rules. Including do not engage Bill in a conversation, do not try to take photos, do not make eye contact… yadda yadda yadda.

Now I’ve met William Shatner before on a couple of occasions and he’s always been pleasant and awesome unless your crying at him and acting like a nut.

So he arrives after doing an interview in a nearby room and does the whole press photos and the “VIP” book club members, which I refuse to join.

I am attempting to shoot pictures of the event but the lighting in that place is purposely horrible even with flash. 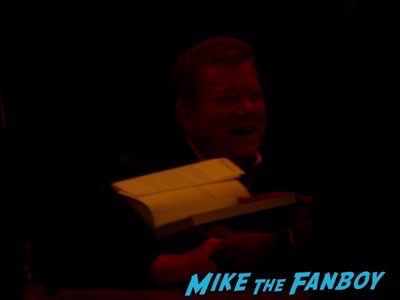 I then arrive to the table where the handler rejects my LP and somehow knew my name and told Bill who engaged me in a great discussion that shall remain private. But I left happy with an added bonus that shall remain secret. 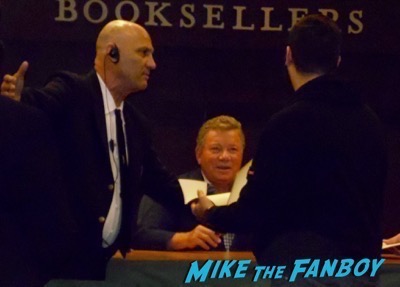 I caught up with the nerd soapbox crew and called it. Time to go to work overall B&N still sucks but Shatner rules!