Home / Contests / MTF Contest Time! Win A Copy Of Bounty Killer On DVD! Take A Look At The Awesomeness Of Mary Death!

This is the age of the BOUNTY KILLER.

Bounty killers compete for body count, fame and a fat stack of cash. They’re ending the plague of corporate greed and providing the survivors of the apocalypse with retribution.

And now, you can win a copy on DVD! #awesome

It’s been 20 years since the corporations took over the world’s governments. Their thirst for power and profits led to the corporate wars, a fierce global battle that laid waste to society as we know it. Born from the ashes, the Council of Nine rose as a new law and order for this dark age. To avenge the corporations’ reckless destruction, the Council issues death warrants for all white collar criminals. Their hunters: the bounty killers!

Bounty Killer is in theaters and VOD September 6. Go see it! 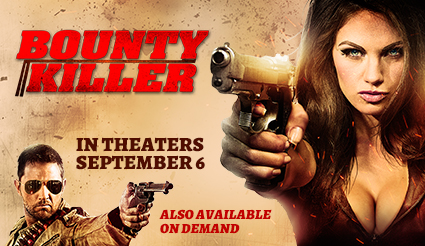 It’s Mad Max meets Grindhouse while getting slashed by Kill Bill!I have to tell you, I didn’t know much about this indie film, but after seeing the trailer it looks pretty damn good! Lots of over the top cheeky grindhouse fun.

Check out the Bounty Killer app below, it’s pretty awesome!

Simply post your results from the Quiz on the blog app!