The Legend of Hercules is coming to theaters and we have an awesome giveaway for you!

You can can win a signed movie poster from the film! Kellan Lutz has autographed a poster just for the Mike The Fanboy readers!

In the epic origin story THE LEGEND OF HERCULES, Kellan Lutz stars as the mythical Greek hero — the son of Zeus, a half-god, half-man blessed with extraordinary strength. Betrayed by his stepfather, the King, and exiled and sold into slavery because of a forbidden love, Hercules must use his formidable powers to fight his way back to his rightful kingdom. Through harrowing battles and gladiator-arena death matches, Hercules embarks on a legendary odyssey to overthrow the King and restore peace to the land.

Check out this awesome interactive movie poster as well! If you move your mouse over the gifs you can control the action in the film!

And don’t forget to check out the new trailer! 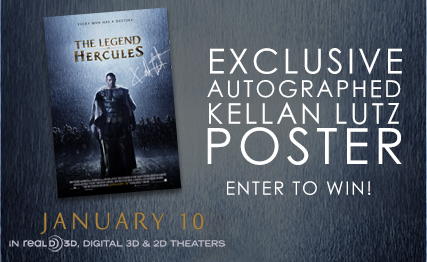