I just got this great recap from Wizard World in Chicago by MTF Reader Melissa! She had a great time and met some awesome people including Heroes star Milo Ventimiglia, Wil Wheaton, John Barrowman and Aaron Ashmore!

I’m so glad Melissa wrote in and shared her experience! It’s a wonderful recap!

Make sure and check it out below! And Melissa don’t be a stranger! 🙂

This past Sunday my bff and I attended Wizard World Chicago.

We were the first in line for Milo Ventimiglia at around 10:20am. According to the sign he was going to start signing at 10:30am so we looked at the pictures we could chose from to be autographed. They had a mix of Gilmore Girls, Heroes, Rocky, and candid photos (I picked one from Heroes). The curtain started to move and I assumed it would be the person handling the sales so imagine my surprise when it was Milo himself. He smiled and said hello before settling in at the table.

The assistant came out and we paid our autograph/photo fee. My friend went first and told him he was the first person she was seeing that morning and he was like, “We are so hugging after this!” He signed her photo and chatted with her before taking a cute picture and hugging her, as promised. When it was my turn I introduced myself and he introduced himself (which was adorable). I told him I was so excited he had been added to the guest list and he said he was glad it worked out that he was able to come. While he signed I asked if he liked visiting Chicago and he said his dad lives here. 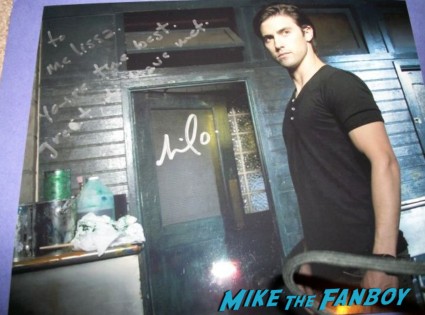 When it was time to take our photo the assistant was helping someone else so he grabbed my camera and said, “Okay, we’re doing a selfie!”

So he snapped the pic and it was totally blurry. I said I didn’t mind waiting for the assistant to finish so she could take the picture and he’s like, “No, I got this!” And the second one came out perfectly. He shook my hand and I was on my way. He was such a genuinely friendly and sweet guy. 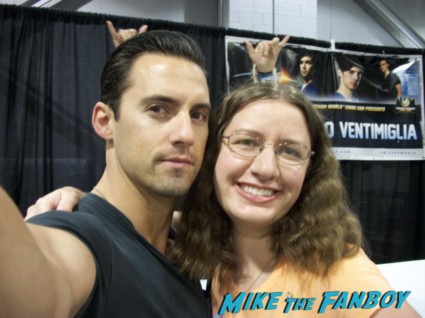 Next up was John Barrowman. I tried to meet him at C2E2 in 2012, but his line was too crazy and I missed my chance. I was not going to let that happen this time! I waited for about 20 minutes and got up to the front. John had his whole family out in full force. His husband was selling the autograph tickets and his parents were there supporting their son. It was really nice. I had him sign a picture from Doctor Who. John was just as sweet as he seems. I told him how much I liked Hollow Earth and he told me about some other books he has coming out. Unfortunately I wasn’t able to get a photo with him, but I was just as happy to have FINALLY met him. 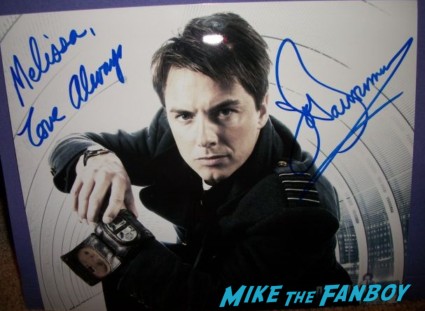 Wil Wheaton was next on the agenda. He’s known for a lot of things, but I’ve only really seen him on Eureka and The Big Bang Theory. The whole experience was kind of underwhelming. He was very nice, but not overly chatty. 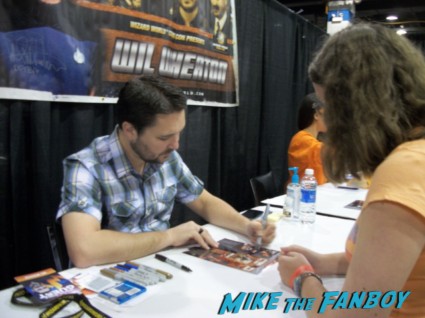 I guess it would have been different if I had more to say to him, but I can’t say anything bad about the guy. He signed a Big Bang Theory photo. You weren’t allowed to take pictures with him. 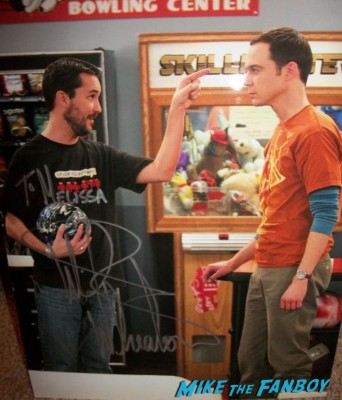 I had been debating if I wanted to meet Aaron Ashmore or not. I really liked him on Veronica Mars and Smallville. We decided “What the heck?” and sprung for the autograph and photo. My friend went first and asked Aaron if he was going to be in the VM movie. He said he really wanted to be and was appreciative of the fans that supported him by tweeting about it, but ultimately he didn’t end up in the movie.

When it was my turn I told him I was a big fan and we talked about Chicago and how he would have liked to have been able to spend more time in the city. We took our photo and then we were on the way. 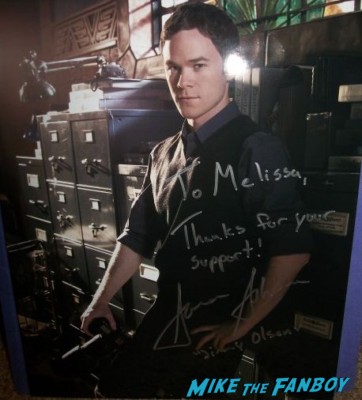 After I walked away from the booth I looked at the picture and it was all blurry. I went back to ask if we could do it again, but he had already left to do a VIP photo op or something, but the lil sign said he’d be back at 2:30pm (it was like 11:30ish at the time). So we went to do something else and after that I saw him going back to the table much earlier than I thought. So I went over and explained what happened and he was like, “Oh, yeah no problem. We can do it again.” So my friend took the picture and was like, “Ah, shoot…it’s still blurry…” Then she was fussing with the camera and she said to Aaron, “Sorry, this is taking so long” and he was like, “Don’t worry about it” and I said, “Don’t worry…I’m good here.” and he laughed and was like, “Are you cozy enough?” (his arm was around me) and I was like, “Definitely.” It was funny. Then she got the picture and he checked to make sure it was okay. 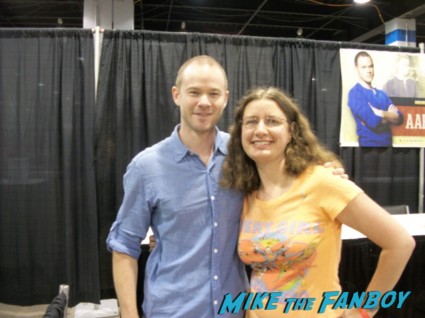 As the con was winding down I saw John Barrowman was taking photos for a small fee so I hopped back in line and did that. John is just too cute for words and was directing everyone’s photo session. I told him to make me look good and he did. Such a nice guy. 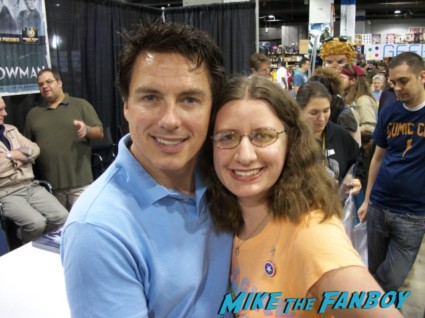 Overall it was a very successful and fun day.