With all the talk of Wondercon this weekend, I figured it would be a good time to take a look back at meeting the cast of Arrow at Wondercon a few years back. It was a really fun day and seeing as it was the final day of the con a nice cap to the weekend!

Ah, the final day of Wondercon 2013. Suddenly Susan and I hit the road and headed on over. Once we hit the convention we lined up to get in.

On our agenda today… Arrow… Much Ado About Nothing… Shopping… You know the usual. It’s not a convention without buying a little something. But first things first. We have to get in line!

We met up with Linda, The Lovely Erica’s sister and partner in crime. Erica was farther up in line. 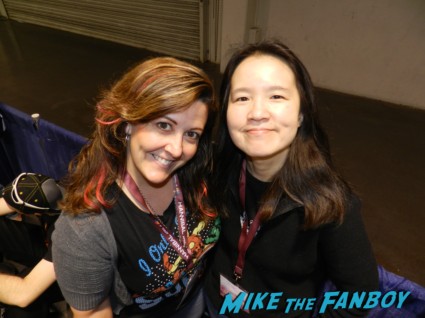 The pens were let into the convention floor with care one by one by one by one and we made it to the DC Booth. The line was capped before the doors were even open however Susan and I worked a little line magic and got wristbands! Score #1… Then DC handed out wristbands for Lego Batman, so we jumped into that line and we got one of those as well. 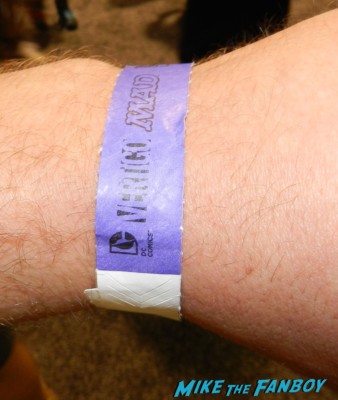 Then we ran over to the Much Ado About Nothing panel, which you can read about here.

After the panel was over we headed over to DC for the Lego Batman signing. 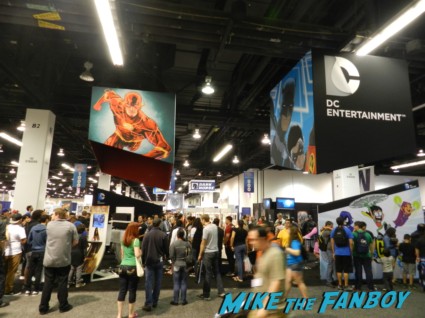 It was quite literally the easiest signing we’ve had all weekend and the posters were cool. 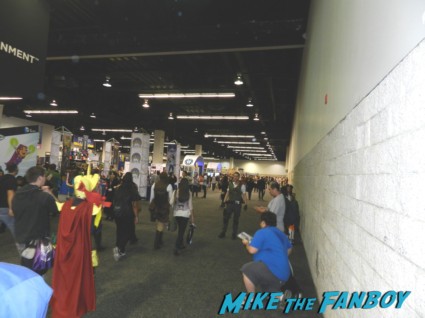 Sadly, I couldn’t photograph it because I left it in Susan’s bag. Doh!

We had some time before the Arrow signing and I really didn’t get a chance to walk the convention floor so I headed around to check some stuff out. 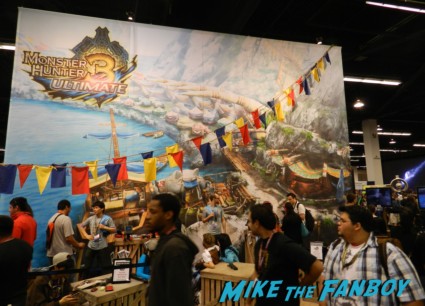 Now, I have decided to limit my collectable collecting. Look I can only have so much. I wanted to start collecting The Walking Dead figures, but you know… You can only do so much.

There was a wide variety of stuff around, including artists and vintage toy dealers. Honestly, I love looking at the random memorabilia strewn around. Someone even had a vintage Bill and Ted cereal box. I might have to keep an eye out for that!

I also had an opportunity to talk to one of the guys at reaction figures who is involved with the new Alien series of action figures. 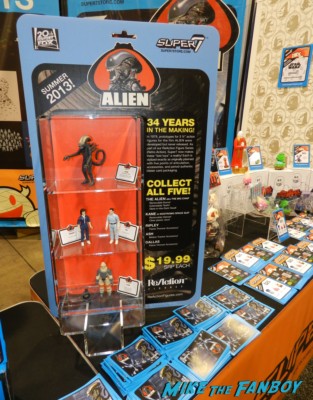 Guys these are awesome. Back in the 1970s there was going to be a series of Alien action figures, well they were never released because the one toy that was released a 12” version of the alien creature, was deemed too scary for kids… Uh yeah!

So the entire line was pulled.

the guys at reaction figures tracked down the original prototype figures, found the licensing and is going to release the series more than 30 years after they were cancelled. Dude, that’s pretty damn cool. They are going to be released with the full vintage blister cards as well. I’m pretty stoked and am going to have to pick up the Ripley figure at least. 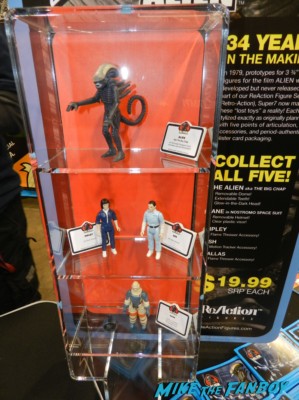 Everyone got into the act at Wondercon, even those that have only been on the earth a few years. 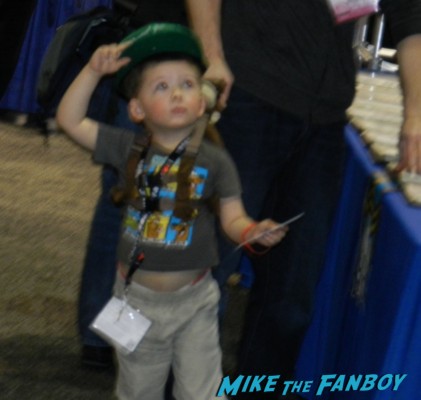 After wandering around, I found some of the adorable POP Figures. As luck would have it, I got a great deal, 3 for 20 so I bought the Thor, Rick Grimes and Green Arrow figures. They are so cute and I figured, with the Arrow signing coming up in a just a little bit, if they let us bring in other items it would be perfect!

Speaking of that Arrow signing, I headed back to meet up with Suddenly Susan, The Lovely Erica and Linda. After getting popped around back and forth we finally got our place in line.

Sadly, this meant I couldn’t go to the Arrow panel. That’s one thing I hate. You have to choose a lot of times between the signing and the panel. Ah well…

After chilling with the girls for a bit it was time for the signing. Linda had a plane to catch so hopefully, we could get in fast.

Stephen Amell is one of the nicest guys ever and thankfully the people at the DC Booth were so nice to the fans. They let us bring in things to get signed and also gave out a mini poster (which I love). 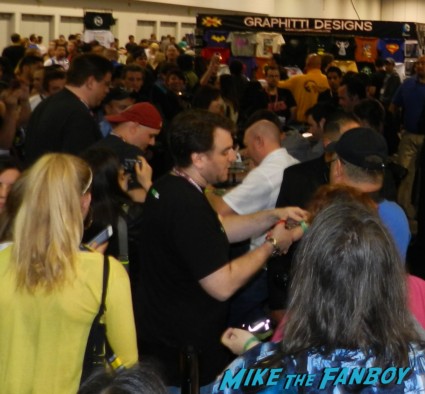 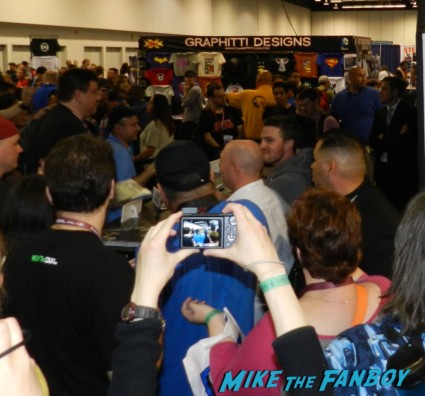 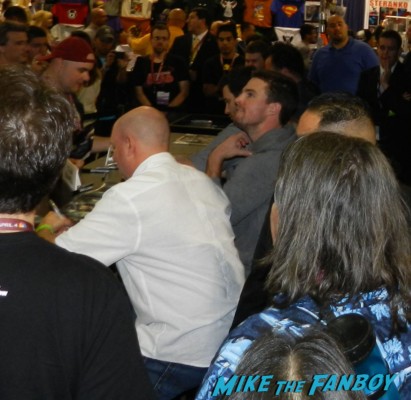 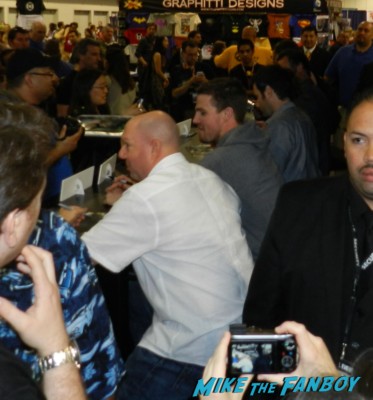 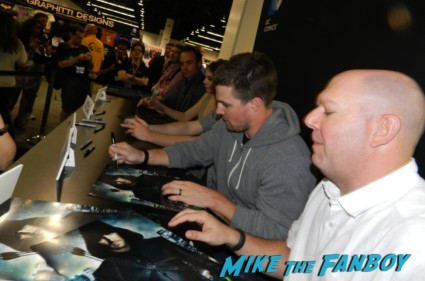 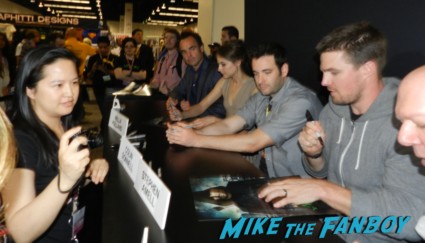 Erica got to chat for a few minutes with the creator and producer of Arrow, I was four people back so I couldn’t hear everything but it sounded great! Maybe, Erica will write up her own recap of the con herself?

Once the signing took place we all scuttled through the line. Both Erica and Susan were able to get photos with Stephen. 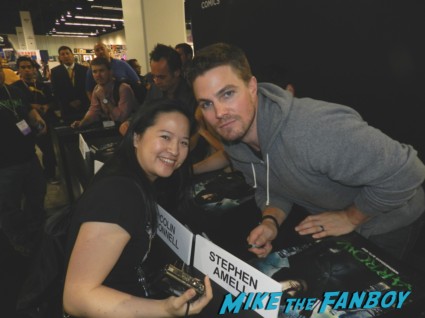 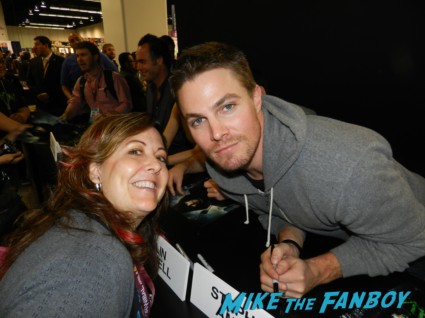 I would have, but I’m sure I look exhausted and standing next to Stephen Amell I don’t think I would have looked that great! LOL… 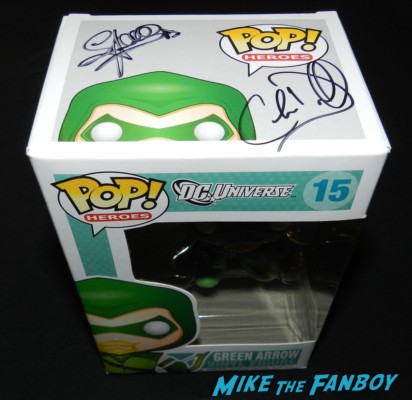 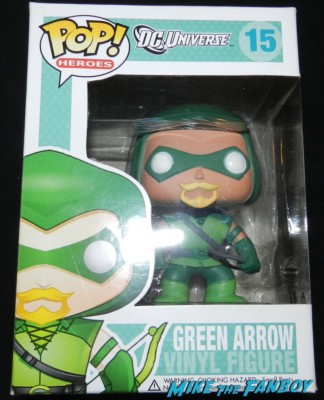 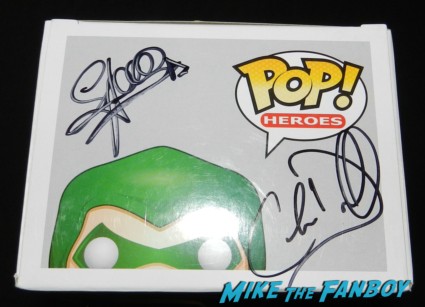 It was a fun signing and Stephen was excited to sign the pop figure for me. I mentioned how cute the figure was and I’m not sure that was a manly thing to say to the buffed up star of Arrow but it just flew out of my mouth. doh! 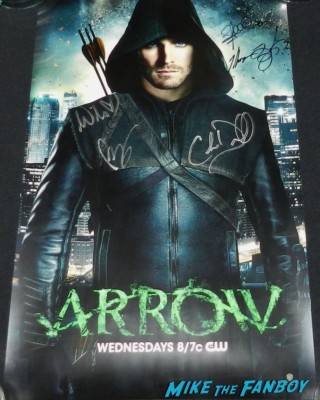 Susan and I did a final lap through the convention floor before saying goodbye to Wondercon 2013.
It was a very fun couple days! I hope, if Wondercon does go back to San Francisco next year there will be another Con in Los Angeles to take it’s place!