I’m so happy to hear from The Scarlet Starlet! She is reporting on the Wrath of the Titans premiere all the way from the UK! Ah, the streets of London will be brimming with Greek Gods and broken pillars! LOL…

Personally, I was so unhappy with Clash of the Titans I couldn’t even bear to see this one, but if the premiere was here I could probably bear seeing Sam Worthingon and Liam Neeson. Lol…

Check out Scarlet’s recap after the jump!

Howdy MTF readers! How are you all? The British weather is improving, spring is coming, and I’m back out on a London street for the Wrath of the Titans premiere! I wrestled with myself about going to this one. I’d really like a Liam Neeson autograph, but I know he doesn’t always sign at events (nor is he obliged to), and I’ve been warned against going out for just one person for risk of being disappointed. However, Sam Worthington may also be attending, as well as Ralph Fiennes, so I pack up my stuff, arrange leave from work, and I’m off!

This event is at the Imax cinema in Waterloo, a venue I’ve not been to before. It’s circular, with many subway entrances to the ‘forecourt’-type area, which should be interesting. But it’s a lovely sunshiney day, so I’m quite optimistic! 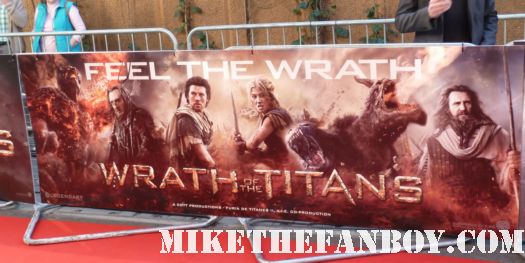 That is until I get there and join the queue (which is smaller than I expected, given that I’ve arrived around 11am) which is down in the subway. Dammit – I’m sat here shivering in the shadows, gazing at the sunlight. Its’ a rather odd state of affairs. But I guess it makes sense really – knowing there were subways I should have considered that I might not be waiting in the sunshine – fortunately I brought a jumper and jacket so I’m not without warmth. 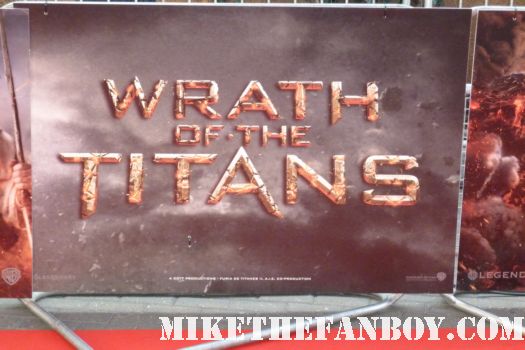 The line is growing steadily, and there are lots of nice people to chat to, and the day meanders on. It amuses me to watch the crew setting up the venue – more specifically to watch them carrying around polystyrene (I assume) columns single-handedly! Small things please small minds and all that! :0) 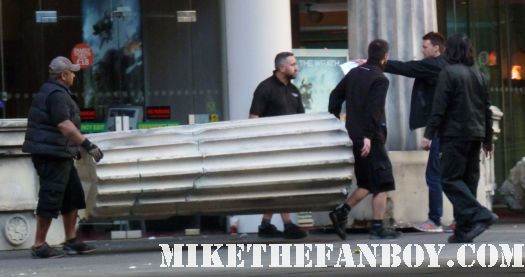 We’re wondering about the fan pens. In the past there have been fan pens the whole way round the circle of the Imax, but that was when Tom Cruise was coming for a premiere – he who is well known for being awesome at premieres. Security tells us that there are three fan pens, one where we’re currently standing, and two further around the circle. Hmmm…. I’m reasonably near the front of the queue, and I think one of the other fan pens will be better, so fingers crossed I get into that one! 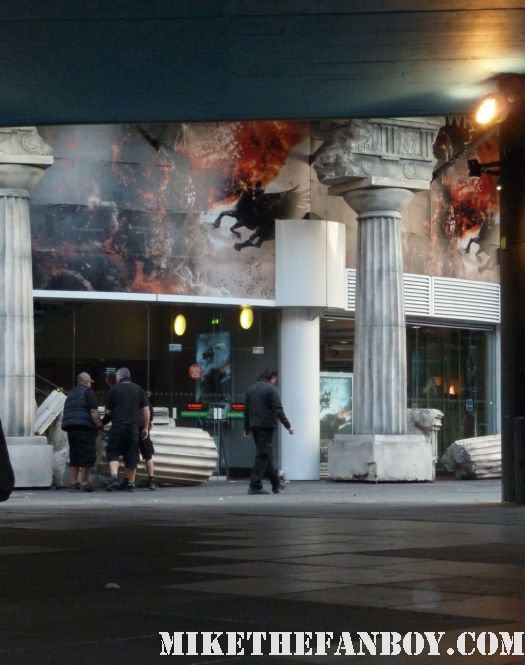 Around 3pm Security start moving us, and I have to say that they do it very well – we’re all lined up, and they lead us out in a line to file into the fan pens. I’m traversing the space where the red carpet will be, and we pass the first fan pen – right to the side of the door! That would be an awesome spot! We keep going, around the other side of a pillar, where are we going??? Into another fan pen and we rush back up towards the pillar to get close as we can to the door. We seem to be opposite the photographer’s pen, which could mean mon belle visage gracing the background of many publicized images – also, will the guests sign here? I’m hopeful that they will, as they will have to come over for the photographers, so fingers crossed!

Time wanders on, and it’s probably around 6pm before things start happening. Guests are arriving from the other end of the carpet, and we can hear the shouts go up! :0) Sam Worthington is on the carpet, and is the first to come over to the photographers with his partner Crystal – who has the most awesome hair! I love it! 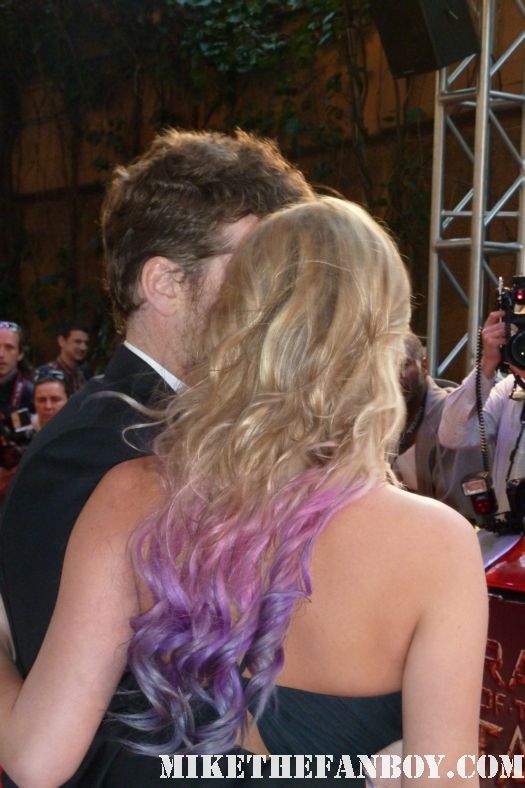 After posing for the photographers, Sam heads to the far end of the line and starts signing his way up! Amazingness! He signs my Avatar blu-ray sleeve, and is doing photographs as well! 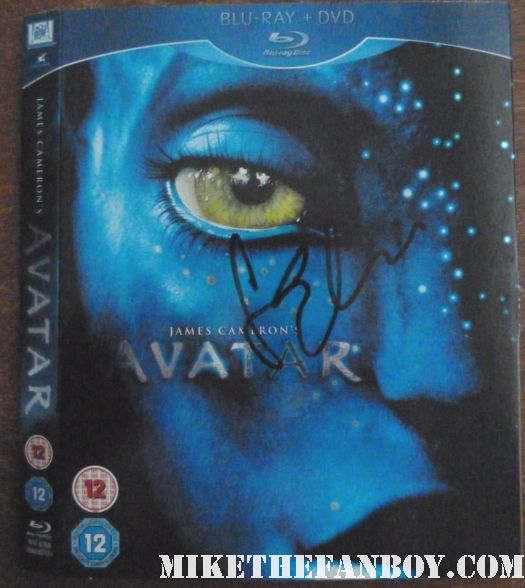 I ask for one as well as an autograph and he says “yes, are you ready to take it?” – A quick fight with my camera to retract the zoom (which in effect took a few seconds, but seemed like ages!) he says “let’s do this!” – I love it! And voila! I get my photo! Now I just need to work on my impromptu photograph face… but it’s definitely me, and it’s definitely him, so I’m happy! :0) 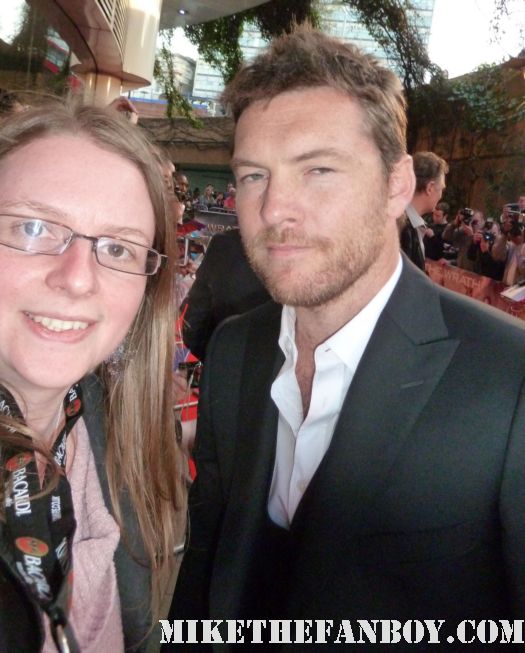 Woop woop! As Sam Worthington is moving away from our section, Liam Neeson arrives for photographs! Someone on the right of me is the first in our section to ask for an autograph (the difficulty is that we can’t see around the pillar, so we don’t know what’s been going on further down the carpet), and he turns around and explains that he’s not signing today. Fair enough. Message is passed down the section so we don’t bug him. 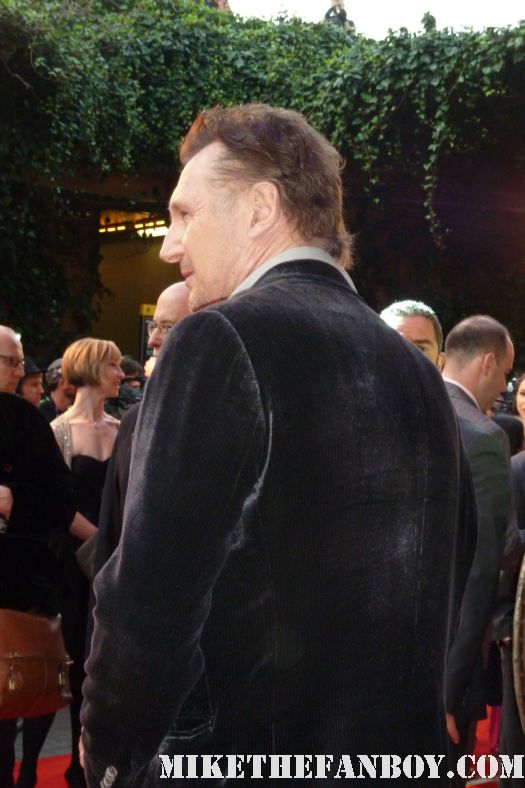 Oh! Jonathan Liebesman, the director, rounds the pillar! After his photographs he starts signing the line, moving down the line from the pillar out towards the end of the red carpet. 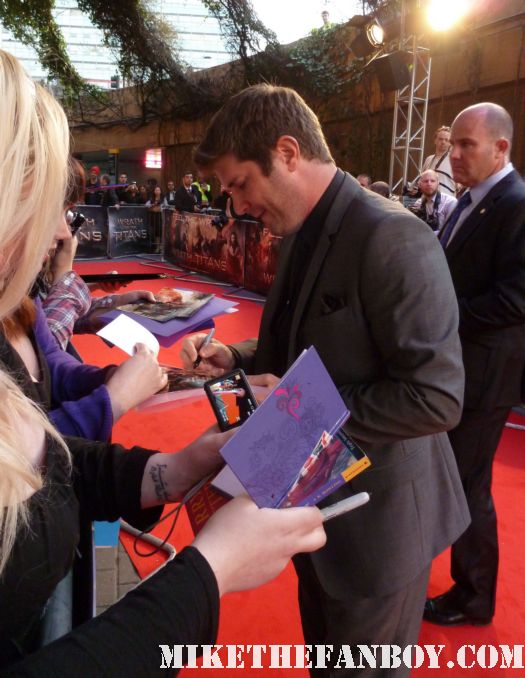 He’s really friendly, chatting away with the fans and making jokes – someone has a Harry Potter book for Ralph Fiennes to sign and whisks it away from him, to be replaced with a more suitable medium, which amuses him. 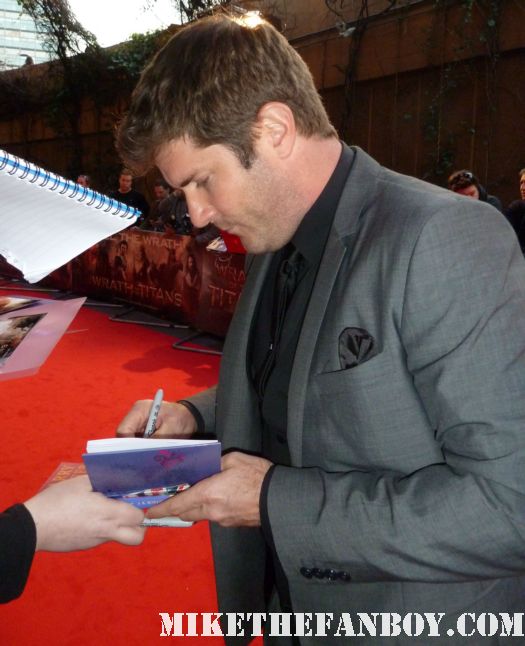 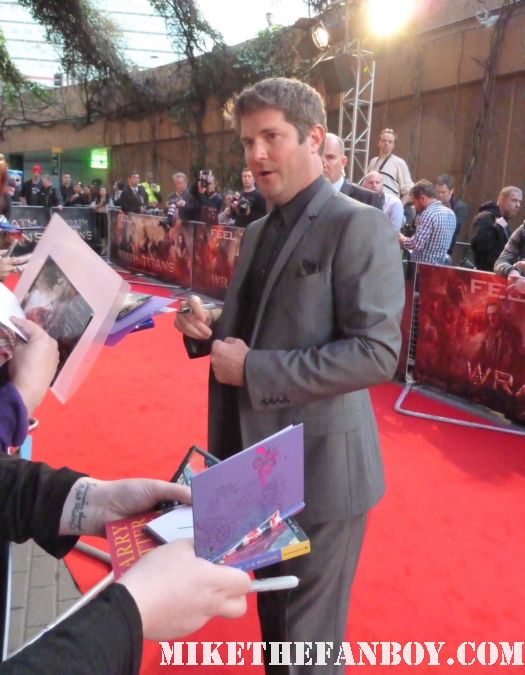 I get him on a record card. 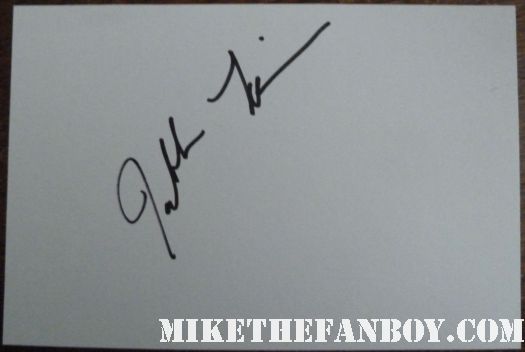 Spanish actor Alejandro Naranjo is the next to come past, and signs after photos – 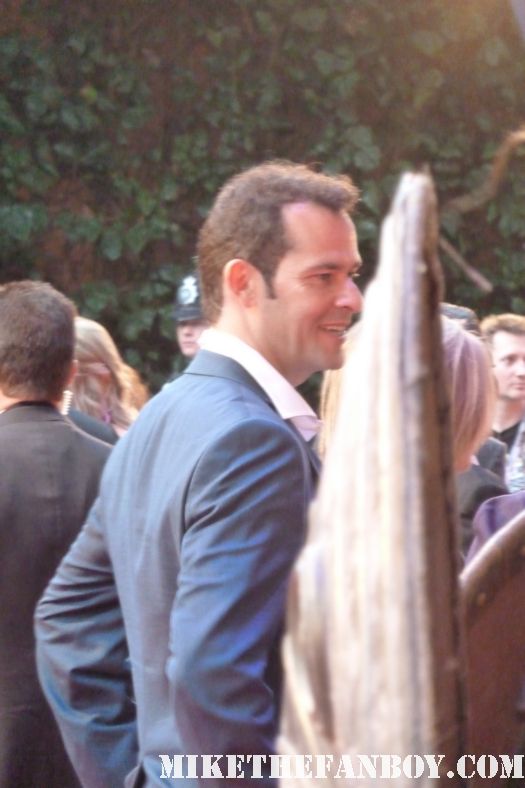 he signs for everyone in the very corner of the card/photograph; perhaps to prevent mounting? He’s quick, but happy to sign for everyone. 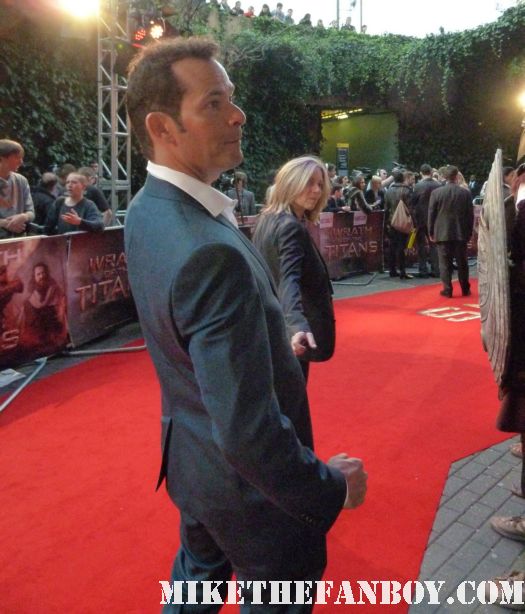 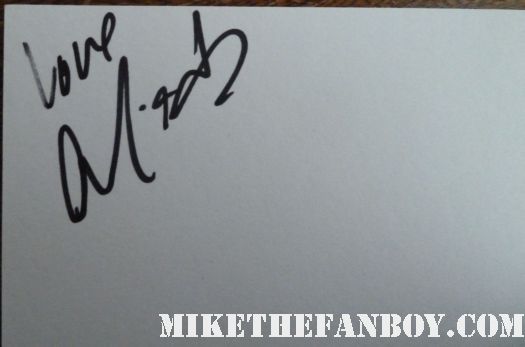 It’s all going on the red carpet! Here comes Toby Kebbell! He does photos, including quite a few with the costumed Greek soldiers who are gracing the red carpet. 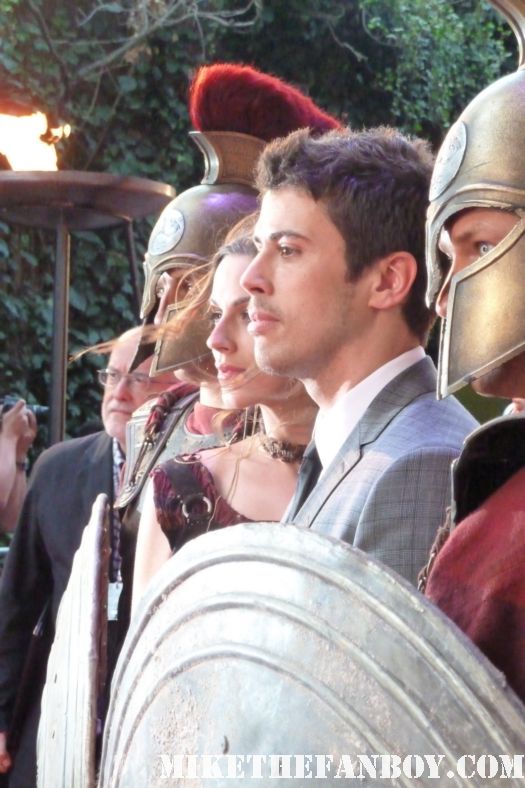 And he’s signing the full line too! I know quite a few people have been waiting for him. I thought he was great as Garsiv in Prince of Persia, and I’ve realized there is a hole in my British film knowledge, as I haven’t yet seen Rock’n’Rolla – this needs to be rectified! 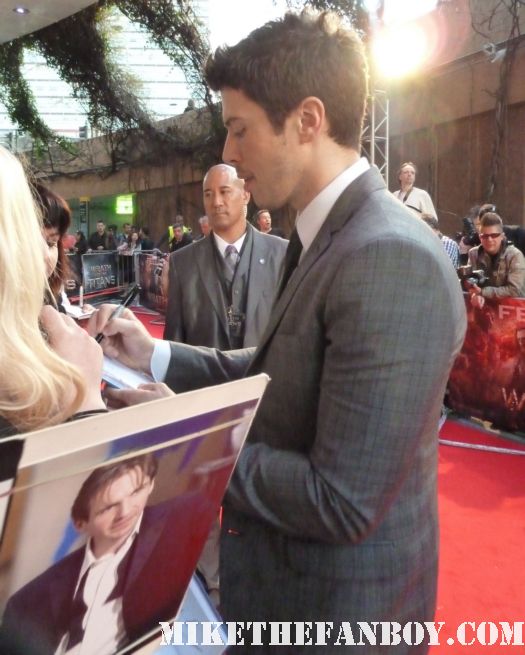 Toby is signing the full line as well! Awesomeness! Like Jonathan Liebesman, he’s really taking his time and doing photos and chatting with fans as he goes – a really nice chap. 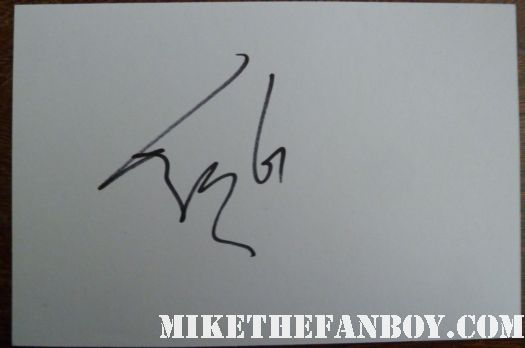 A call goes up, and the guests are now making their way between the pillars, through the doors to the Imax. Wow, that’s that! We’ve heard that Ralph Fiennes is unfortunately unwell, so has not been able to make it. All in all, a good event!