The Novel Strumpet headed out to the USC campus for Day 2 of the Los Angeles Times Festival of Books! Now, I had a great day at the festival and eventually, I’ll get my recap going… Sigh… What’s a busy fanboy to do?

The Novel Strumpet had an amazing time at the Festival and attended a bunch of panels and such. How fun.

Check out The Novel Strumpet’s Festival Of Books recap after the jump!

Yep, I went back for more! Thankfully I already had my pass so didn’t have to pick it up again. I got to the Festival a little early so I could look around some but made the wise decision to get some coffee instead. I woke up a little late so didn’t have time to drink any before I got there and an uncaffeinated Strumpet is a scary Strumpet. Probably why all the bicyclists on the subway got my blood pressure so high I was ready to punch people. However, just getting away from all those bicycles (which took up so much room they blocked seats and almost caused people to miss their stop) and stepping foot into a book festival helped a lot.

I took a picture once I was sufficiently drugged… 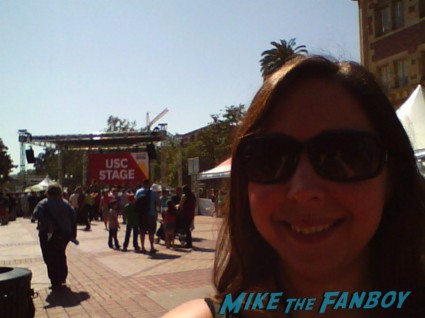 My friend Jenn was going to join me but she didn’t get my text until late so I went to my first panel while she was heading down. Again, this one started at 11am and was titled Here Be Dragons with Marie Brennan, Robin Hobb and Raymond E.Feist. 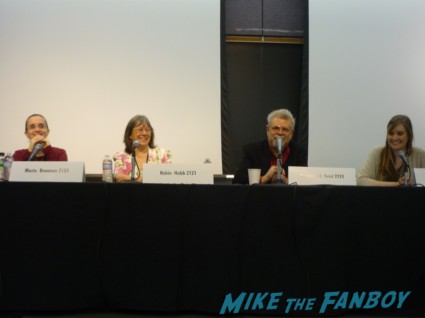 Raymond Feist is about to end his 30 book cycle of the Rift Wars but says that there is still @ 300 years worth of history still so he may revisit later. Just FYI he started the basis for his world during his RPG days.
Marie Brennan also belonged to a RPG group. Both said that it was helpful in the world building somewhat. It helped lay the foundation that they require different skill sets

Robin Hobb keeps a “Go Back” list. She uses it to see where she needs to go back and add something in or build something out. She also liked the rewrite process more than the first draft because in rewrites she can go back and make things better, more clever, more exciting, etc.

Lots of talk on world building, writing process, stories that had the room laughing out loud. The really interesting thing they all talked about was how people who spend years “preparing” to write something will never get it done. In a way they are afraid of starting, of writing, of putting those words on paper and being judged for them or having them not come out as brilliant as you think.

Once the panel was over I got a text saying Jenn had arrived. So we met up and walked the Festival. They had a giant “wall” up where you could write down what you were currently reading: 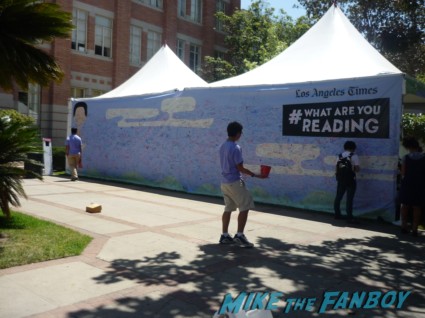 So of course Jenn and I had to add ours: 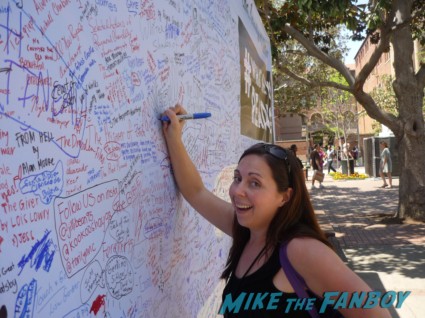 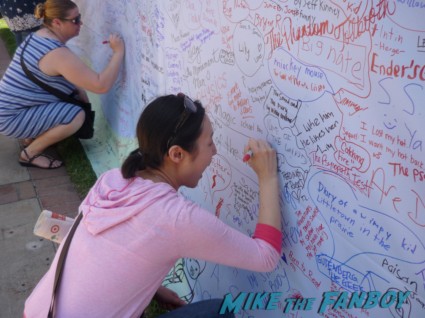 What did I write down? I’ll never tell…

We walked back in the YA and kids sections. Jenn spotted this book: 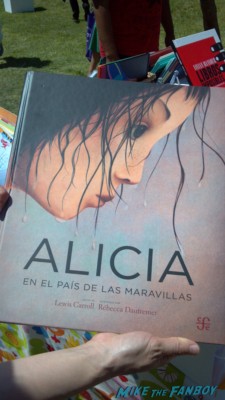 I think it’s Alice in Wonderland in Spanish or something close to that, but I don’t know Spanish so I’m not sure. Being the genius I was growing up I never thought I’d need Spanish (growing up in Tennessee) so I took French in school. Silly.

I decided to get some pics of the Festival but I’ve taken so many over the years I don’t know that anything was different: 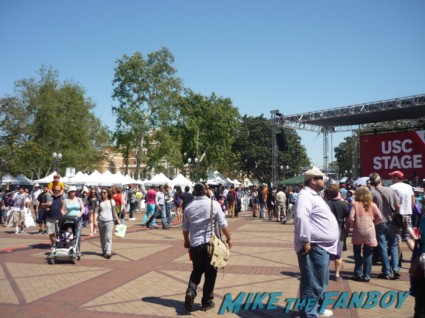 However, I did notice the giant USC shrubbery and how all the flowers were in red and yellow. Clever… 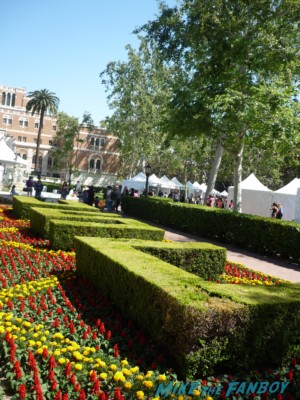 I did drag her to my last panel, which was a Romance panel called Body Heat. I had a lot of hope for this one, since I’ve never sat in a Romance panel before. But it was a little like watching SNL’s “Delicious Dish” only without the naughty stuff. I mean they talked about sex but it all seemed so polite. You could also tell the day was winding down and the heat had gotten to everyone. We all seemed a little drained. 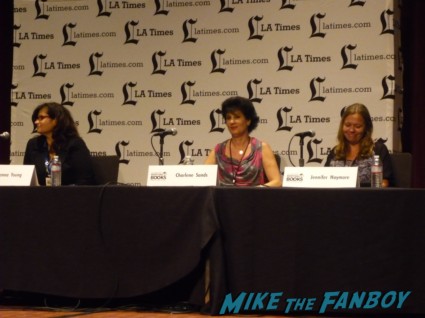 Talked about dispelling the thought that Romance doesn’t take craft, research and dedication. It is the biggest section of paperback sales, and doesn’t get the respect it deserves.

Heat to them is more about the interaction and build up between the characters vs. actual sex. And that they put sex in their books because it is a part of life and people do it all the time. To ignore it is to ignore a huge part of human interaction.

Fans are a big factor in the genre. What writers recognize is how much their books help people during difficult times in their lives, it gives them a healthy escape, and most fans of this genre have their “keeper” books they go back to when they need a quick little pick me up. I admit, I have a few myself 😀

That was pretty much it. Can’t believe I only got one signature the whole weekend but I was running around so much on the first day I didn’t have time to wait, and on the second day I wanted to spend time checking the festival out and not standing in lines.

All in all another great Festival. Can’t wait until next year! 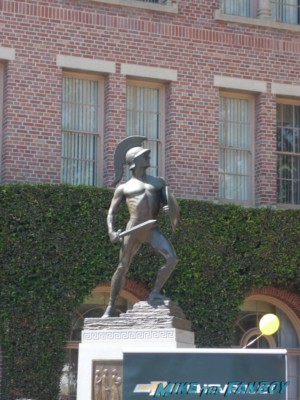