RT has come and gone.  I know The Lovely Erica shared her feelings (which you can read here) and now it’s my turn.

I’ve been wanting to attend RT Book Convention for a long time.  Every year my friend Kelly over at Got Fiction? and Author’s Write Hand posts things all over social media that makes it look like a blast.  I mean it’s a convention for books, how can it not be a blast?

If you don’t know, RT – or Romantic Times – Book Convention is one of the largest book conventions in the country and yes, it mostly focuses on books that have romantic elements.  Doesn’t mean they’re all ‘smexy’ but…a good majority of the ones I picked up are because I like my smexy books 😀

Here’s a little pic of my book haul: 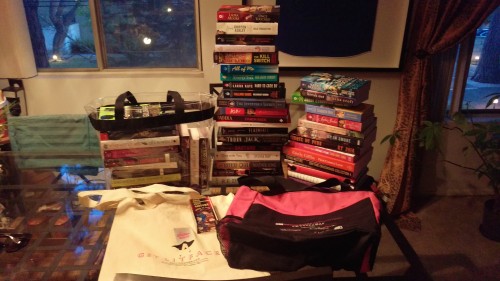 I counted around 50+ for two days of convention. I may have a teensy book addiction problem, but I mean they handed them to me.  Was I supposed to say no?!?!?!  #BookAddict #NoCure

The convention is a bit like Comic Con in San Diego in that it technically is Thursday – Sunday but Wednesday has some stuff going on and Sunday is the day you skip most of the things because by then you’re over it.  Or maybe that’s just me.

To say I met a lot of authors would be an understatement.  That stack in the middle…the book tower…yeah, those are all the signed copies I got.

The convention is super expensive, so I only got the weekend pass which was sort of affordable…so I flew in on Thursday night so I’d be there bright and early Friday to pick up my badge.  I mean lines people…right?

Well…there was a line, but I got there a little after 9am and I was maybe 15th.  So, not as crazy as you’d expect…

I wanna say if there is something RT knows how to do it’s swag their conventions space: 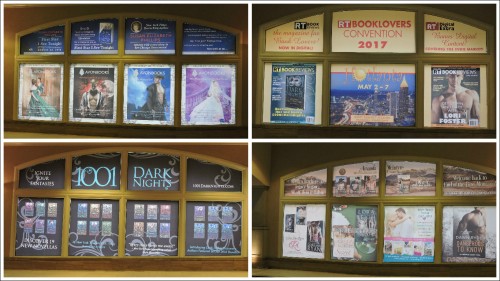 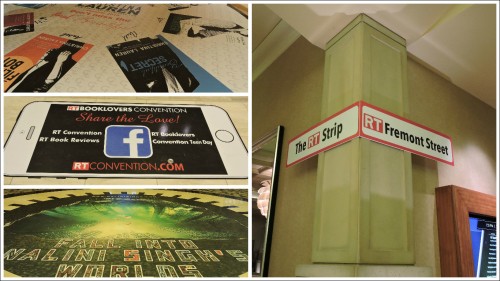 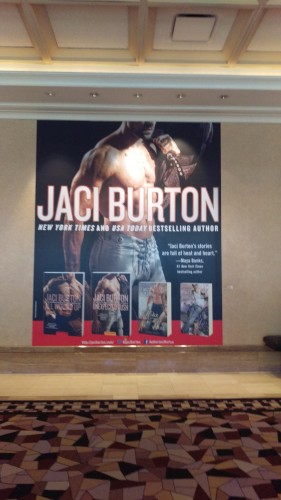 If it had a blank space, they covered it!  These pics are just a few examples.

Friday I went to a couple of panels, picked up some book swag…and was on a panel myself. (In case you guys aren’t aware I do some author PR work on the side now…tee hee).  So that was an eventful day.  That night was the Avon Books “Bling It On” event where a whole bunch of authors gathered to sign books and eBook cards and it was crazy!  Here’s the line-up: 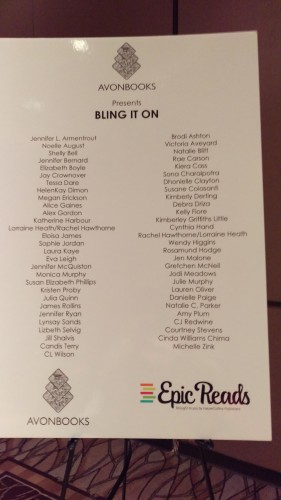 I only had like 90 minutes to try and get them all people.  Talk about a mission impossible. But here is who I did get: 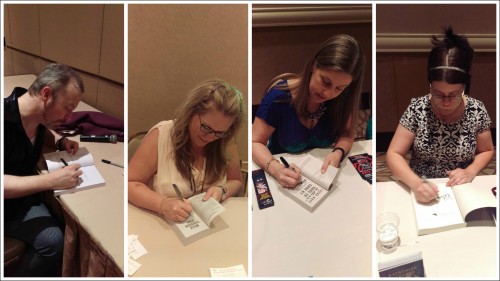 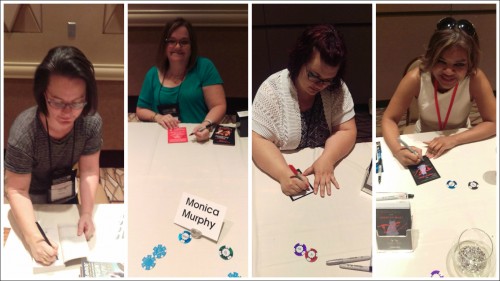 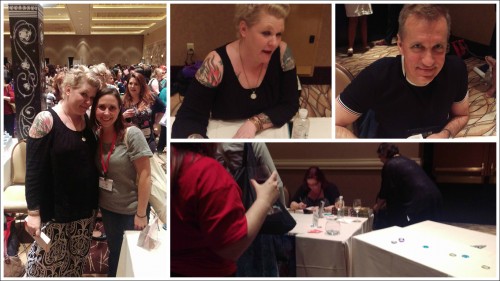 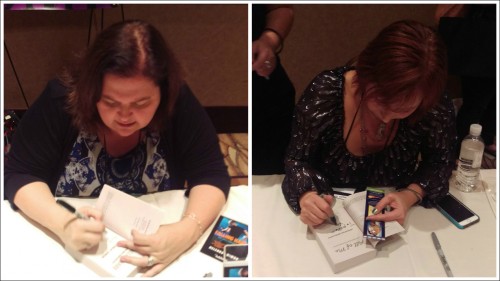 After this ended there was an awards ceremony, which I admit skipping so I could rest up for the Cirque du Punk Party that was happening later that night.  Guess what the theme was…so i broke out this gem again from SDCC days of yore: 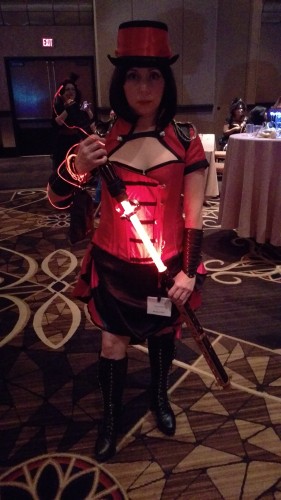 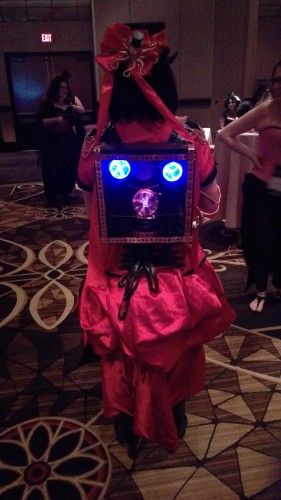 There was a lot of great costumes and table decorations: 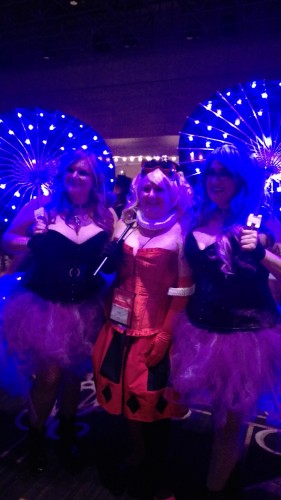 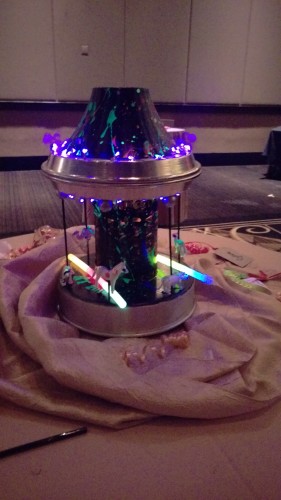 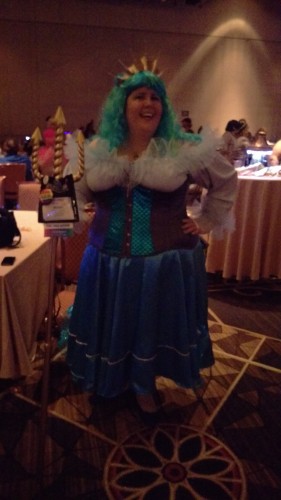 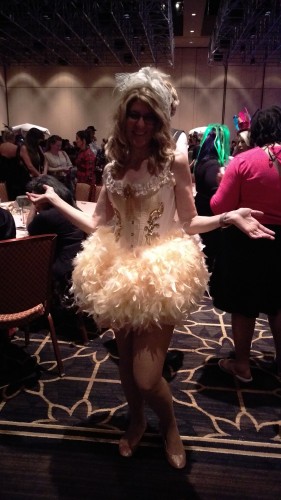 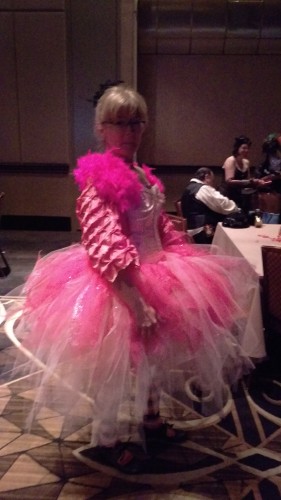 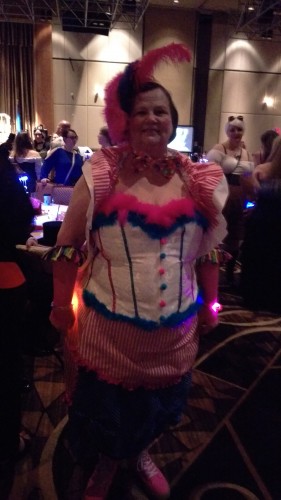 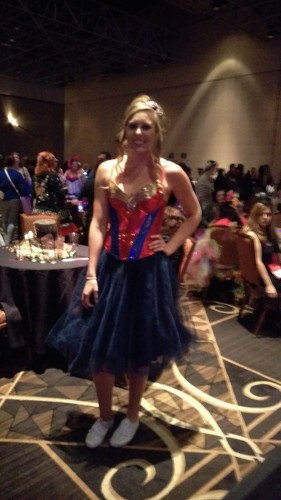 There was a contest for best costume going as well, and not to be a braggart, but I WON B*TCHES!  They had a photo booth as well so Kelly, our roomie Kimber and I got up to some shenanigans.  Plus look at my cool trophy! 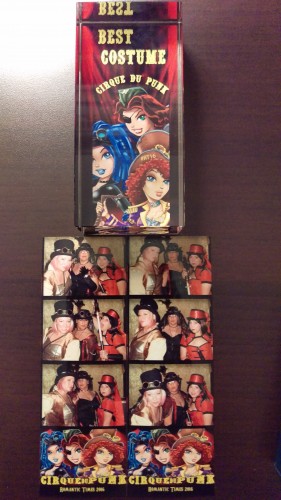 Saturday was the big book signing – 10am – 2pm.  I was warned to expect insanity, but I’m a SDCC veteran so no biggie.

No biggie was right.  I got to meet all my authors, plus a host of other, talk to a few and walk the entire floor (of 600 authors) in about 2 hours.  The wristbands to meet the big authors were quite easy to get, but again I’m basing this off the overnight camping shenanigans some of the others participate in at SDCC.   So here are the authors I collected during the big signing: 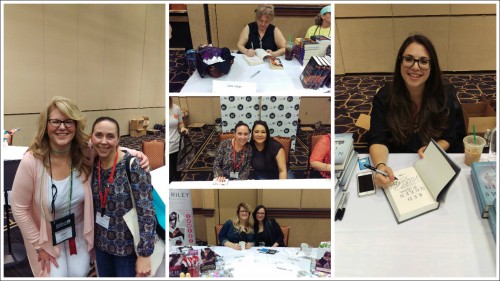 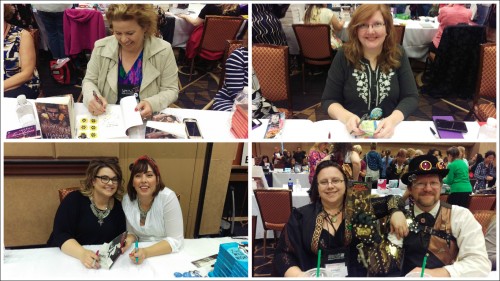 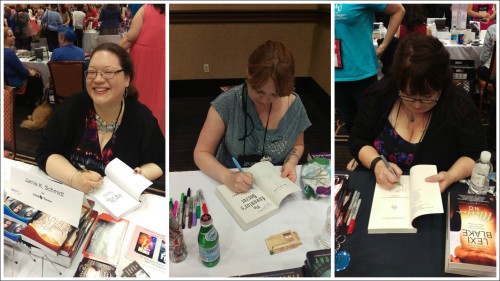 Phwew…after that I met up with Erica and we hit the Teen Day Sugar Crush Party.  We got in line a little early so we could grab one of the swag bags and get a chance at the wheel o’books.  Also wanted to make sure we got there in time to grab…mmmmm…sugar…. 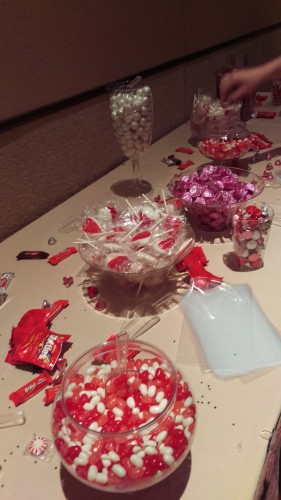 They had a place to take some glamour shots, so we did.  Aren’t we fabulous? 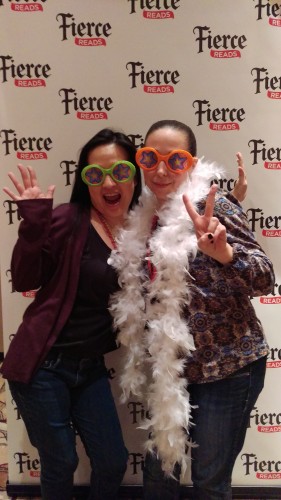 And of course…AUTHORS!  One of the things they gave us was a coloring book (so awesome) which had the book cover and author photo you can color.  I only had one book with me, so I got the authors who were there to sign my coloring book 😀

L-R: Mary E. Pearson, Sandy Hall, Marie Rutkoski, Ann Aguirre and Jenny Moyer.  I also got Kami Garcia to sign my coloring book, but for some reason I didn’t get a pic :-/ 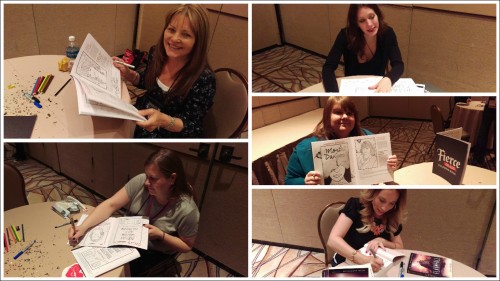 After we were hopped up on sugary goodness, we participated in the tried and true Con experience.  Sitting in line a couple of hours before an even to ensure a good spot.  This is where the #BuddySystem is so important, because you can take turns saving your spot in line while the other runs to another event to grab some swag and then you swap out.  Plus bathroom breaks.  Very important.

This was for the last event of the day TEEN Party!  Where we got to sit at a table with a couple of fabulous YA Authors, answer some trivia and get…you guessed it…MORE BOOKS!

What I appreciated about this event was that they let the actual teens grab their books first and not those of us who just act like we are…LOL.  At first we could get two books per person, but after everyone had their chance they let the teens back in to grab more.  It warms my heart to see all those young impressionable minds glutting themselves on books and carrying as many as their stretched out arms will hold.  It’s a truly beautiful sight.

After that we met up with Kelly, had dinner and that was a day.

Sunday, Kelly and I decided to chillax and read by the pool. 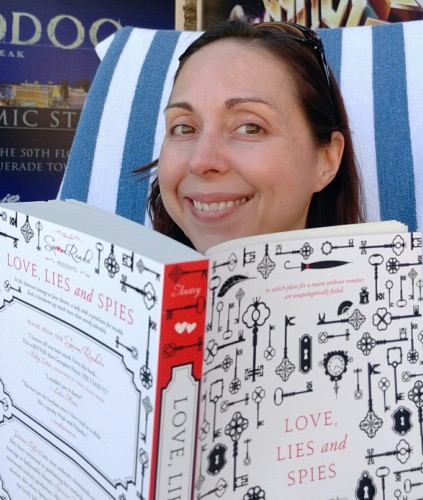 Then we headed home late that night to avoid traffic and that was that.

All in all I had fun, no complaints, but I was a little underwhelmed by it all.  Everything seemed so easy and all those ‘crazy’ lines I was told to expect were a bit long, but manageable.  Plus you could walk around, they had golf carts to drive you from the hotel side to the convention area…I guess 10 yrs of SDCC has skewed by perception of Cons b/c this was a walk in the park in comparison.

Will I go again?  Maybe if I hit the lottery…it’s expensive people.  Really expensive.  I mean I met a lot of authors, got a ton of books, but feel like I missed something and I can’t put my finger on what that was.  Maybe if I had gone the whole time I would feel more like I’d done a Con.

But hey, I have more books to add to the TBR pile that’s stretching to the ceiling in my room so that’s awesome…he he he.

Until next time guys!

Oh hey, if you wanna watch me give my overview, you can to to my YouTube channel or click this link: https://youtu.be/BoWM4xUzp5c