Tonight Fargo premiers on FX  (10PM ET/PT) and I don’t know about you but I am looking forward to some of that “Minnesota Nice” with a dash of malice, a pinch of oppression and a sprinkle of dark humor all mixed in.  Mmmmm, just like momma used to make.

Recently I got the chance to sit in on a Q&A with Billy Bob Thornton and let me say, I’ve always thought he was a great actor, but I think this interview had me developing a little crush on the guy.  I’ve got a thing about voices and I’ve never really thought of his as one I’d be drawn to, but he manages to put a lot of lilting warmth and charm into that voice (well he is from Texas) and it can get a little mesmerizing.  Not gonna lie.  It was kind of attractive.

Thornton plays Lorne Malvo – the sort of Mephistopheles of the piece.   At least that’s how I see his relationship with Martin Freeman’s Lester Nygaard.  Thornton has some other views on his character:  “I look at Malvo as a type of sort of snake charmer, you know.  Once he looks at you you’re under some sort of spell…In other words, he exists in the animal kingdom more than anything else… “ 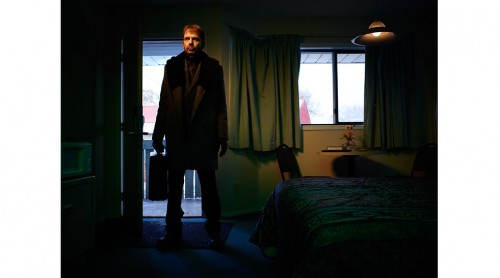 From what I’ve seen, that’s a pretty good description.  Even in the snippets you can see online or in commercials you just know Malvo is bad news.   Who better to play such a character than Billy Bob Thornton?  He is a master at that type of menace – and I mean that in a good way.  That sort of understated evil with a quiet voice and just oozing murder and mayhem.  One of the bloggers even brought up how good Thornton is at acting with his eyes and asked if that was part of his ‘craft’ or just something he does naturally:  “When you weigh 135 pounds and you’re telling people who are six-four, 250 to get out of your way, how do you do that?  Well, a lot of that is exactly what you said, which is in the eyes.  If someone is talking to you and tells you that you ought to do something and you can tell they mean it, those are the scary people.”

And Thornton is a master at saying things and having you believe it.  So is it any wonder that Lester will fall under his spell?  But what makes a character like Malvo tick?  What’s his story?  Where did he come from?  What happened to him to make him the way he is?  Thornton had some interesting views on these questions:  “Well, you know, usually when you’re playing a character you think a lot about their back story and that kind of thing and in this instance I didn’t want to do that because I doubt “Malvo” thinks much about his past anyway…And besides, if I did, let’s say we came up with a back story for him, that coldness and that sort of ruthless thing that he has, if I’ve learned that, well, the reason “Malvo” is like that is because he was abused and had a horrible childhood, all this kind of thing, I might bring more sentimentality to the character…And it might mess it up.”

Well about this signature look we’re all coming to know?  Especially the haircut, where did the inspiration for that come from?  “A weird haircut, which was actually a mistake.  I got a bad haircut and we had planned on dyeing my hair and a dark beard and all that kind of thing, but I didn’t plan on having bangs.  And bangs are normally associated with innocence and I thought that juxtaposition was pretty great, so that was added.”

So then the questions turned to what drew him to the character:  “I think what really attracted me to it was not as much that he didn’t have a conscience as he has this bizarre sense of humor where he likes to mess with people, where most criminals if they go in to rob, say, a clothing store or something they go get the money and they get out of there.  But “Malvo” would look at their sweater and say, why are you wearing that sweater?  I mean, you work in a clothing store.  Look at all those nice sweaters over there.  You look like a bag person.”

It sounds like Thornton really likes his character and the interesting challenges he presents, especially in this type of writing.  He told us about how he gave up a lot of his improvisational style because of how tightly the screenplay is written.  According to Thornton the tight script made it easier to just let the lines sell themselves.  Of course, Thornton’s not a stranger to this type of writing since he has done a Coen brothers’ movie and he’s amazed at how well Noah Hawley captured their style.  Which begged the question of whether or not Thornton was looking for a show or if the show found him: “No…I was offered it and read the pilot script immediately.  It was so well written that Noah had walked this fine line of channeling the Coen Brothers, the spirit and the tone of their movie and yet making it a new animal. So, I thought, well, you know what, this guy has done it.  He really has pulled this off.”

Recently Thornton has talked about how he sees TV becoming the place where actors of his style (and generation) can find the types of roles they’re used to:  “…Baby Boomers, in particular, really have to look to television now, not only the performers and the writers and everything, but the audience…And now, it has a cache and actors are clamoring to go on television because it’s a place that we can do the things we were doing in movies.  There’s a spot that television is filling that the movie business is not, which is the medium budget studio movies…adult dramas or adult comedies and the higher budget independent films…you can do terrific work in television now and have a lot of freedom…”

So how did he feel about working on television? “It felt like doing a 10-hour independent film.  That’s very appealing.  I’ve been accused many times as a writer/director of my pace is too leisurely and it’s too long and stuff like that.  Well, here’s a chance to do that kind of thing and you’ve got 10 hours to do it in.  Actually, it feels great…”  He hinted at the fact that he might look at adapting one of his films that he’s been trying to get made for television.

Speaking of adapting from film to television, Thornton isn’t the only one saying that Noah Hawley did a great job adapting the Coens brothers’ style to the small screen.  I’m excited to see for myself when it airs tonight.  I’m also excited about getting to know the new set of characters.  Like Lester Nygaard, Gus Grimly (played by Colin Hanks) and Molly Solverson (played by Allison Tolman).

Since Lester and Malvo’s relationship is the catalyst for the show talk naturally turned to how Thornton and Freeman got along:  “Well, first of all, it was a pleasure working with him.  He’s so easy to work with and a terrific guy and a terrific actor.  And the scenes I did with him were so easy to do and I think a lot of that is because we’re such opposites [and] we’re not playing buddies or anything…So, I just sit down and do what I do and he does what he does and that’s the way it would happen in real life and all of that.”

And Malvo vs. Lester:  “Well, “Malvo” smells weakness in people, he smells nervousness, weakness, fear, anything like that and has an abundance of confidence in himself.  I don’t think he ever considers losing, whereas “Lester” is just a nervous ball of mess.  And I do like when you see two characters at the opposite end of the spectrum together.  They end up being kind of strange bedfellows and it was a really interesting dynamic.”

Then there are the other big stars of the show; the accent and the weather.  Thornton’s character never really uses the accent – except he fakes it once or twice to mess with people – but he said the other actors do a great job with it.  And as for the weather (the series was actually shot in Calgary): “When it’s that cold, you don’t have to do a whole lot of acting to make the audience feel it.  I mean, it’s just there.  And it also kind of keeps you up for it all day.  If you’re on a soundstage that’s kind of warm and you get a little lethargic, that can affect you.  You didn’t have to worry about that up there. It was really just bone chillingly cold.”

In all it sounds like we’re in for a great show and one that is going to have people buzzing.  Between incredible actors, great writing and the atmosphere I don’t see how this show can fail.  Plus, it’s a mystery and everyone loves a great mystery.  Especially the atmospheric variety.  Thornton summed it up: “It’s very mysterious and that’s what I like about it.  It’s not like cliffhangers and thrillers and things like that, it is a mystery and I think people love mysteries.  We always have.  That’s why they never go away.”