Can I tell you what a great time I had at the Festival of Books this year! All of the authors were so nice… cough, cough… minus one and it was such a gorgeous weekend. Honestly, you couldn’t have asked for more!

The Novel Strumpet is weighing in on her weekend and meeting a ton of awesome peeps! Attending panels and doing what Strumpet’s do!

It’s that time again! Time for the annual book bacchanalia the L.A. Times puts on that gathers all the literary goings on in L.A. Publishers, authors, book related vendors, the list goes on and on. The added bonus is that they finally have the Expo line that lets off at USC finished. Metro baby!

My friend Lisa joined me on Saturday. We got to the Festival around 9:30ish

Trying to find where the press passes were to be picked up was a bit of an adventure since it’s tucked in the backside of a building and the walkway is hidden by numerous tents. But find it I did and I was in business! 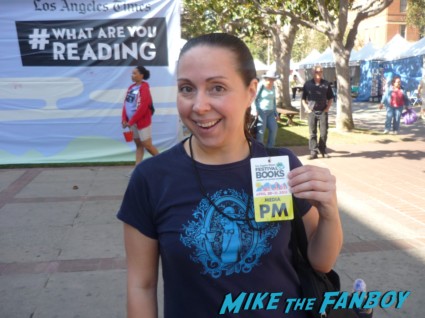 It was nearly 11am and time for the first panel of the day. Lisa and I have been going for the last 3 years together and we never have the same panel. Our reading tastes are just too different. But low and behold, this year our first panel was the same one. A Conversation with Margaret Atwood. So we had to take a pic to commemorate: 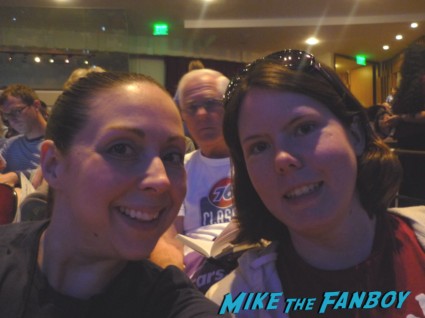 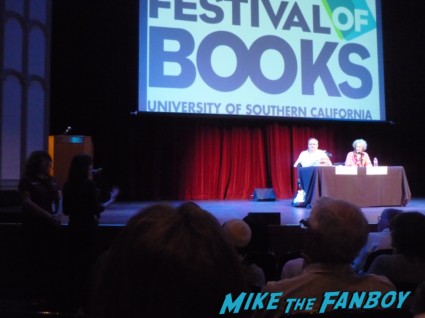 Once used a diagram of a dead moose to show how it’s death affects the ecosystem around it (rats, bugs, vegetation, etc) to a dead Shakespeare and how that affected his economic system (readers, distributors, authors, etc.) Illustrates how if a book fails or author ceases it affects so much around them.
Once got in a tiff with a local government agency over public libraries, her readers were so incensed over what the leaders said that they showed up to a meeting wearing masks of Margaret Atwood’s face. Now that’s a peaceful protest done right. Take note you jackasses who walk around in “V”(Guy Fawkes) masks (seriously you guys need to study history and know who he was before you throw on that mask and say you’re peacefully protesting)

My next panel was at the YA Stage and it started at 12:30pm. I made it over with 15 minutes to spare and noticed that Hollywood is starting to wise up on advertising book related films: 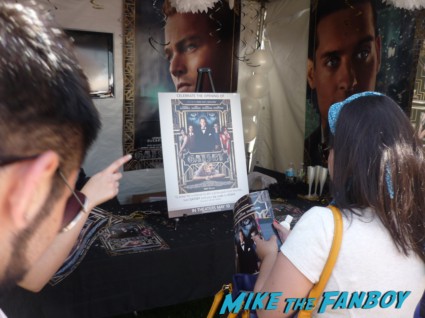 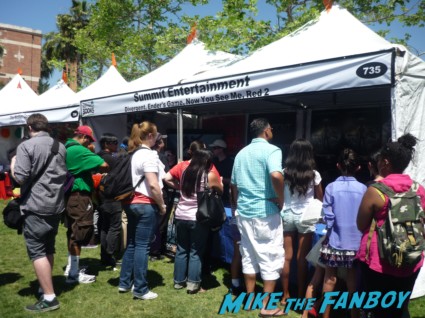 The area in front of the YA Stage was right under the sun and after getting burned a couple weeks ago at the Ren Faire I decided to take a couple of pics and find some shade to listen from. This panel was titled Young Adult Fiction: So Much for Normal with Kiersten White, Rachel Cohn, Tahereh Mafi and Michelle Gagnon. 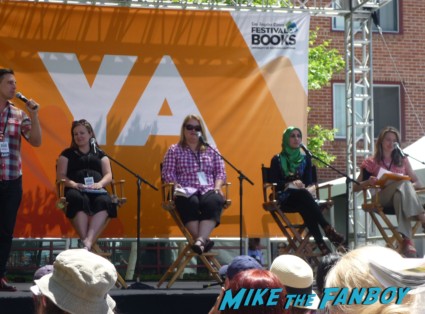 This one started with each author telling a little about their books and then reading an excerpt: 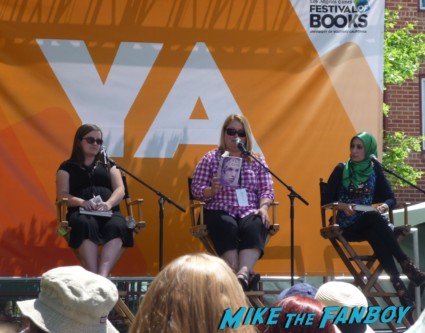 When asked about world building Rachel Cohn joked it was a way to get a tax write off for traveling…mwahahahaha. Kierstan White said, very tongue in cheek, that she’s lazy and doesn’t want to build an entire world so she sets them in the real world and then modifies it just a wee bit.
A lot of the audience asking questions were teens and they expressed how much all of these authors (and others in the genre) and their books helped them to realize that they’re imperfection is a good thing and can make people strong and lead to great adventures.

When asked about whether their characters speak to them and does that make them crazy, or what should you do if they are talking to you, their reply: Overwhelming answer was it does not make you crazy and all the authors said that if they are speaking then write down what they are saying. That is how all their books started.

I didn’t wait to get any books signed because I only had 30 minutes before my next panel and the line was already long. So I headed over to another YA panel – Writing for Teen and Tweens: Sagas and Series with Margaret Stohl, Lynn Rutan (moderator), Ridley Pearson, Jaclyn Moriarty and Kami Garcia. 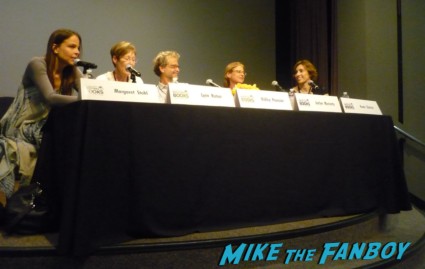 Both Margaret Stohl and Kami Garcia have stand alone books coming out (they wrote the Beautiful Creatures novels together) that have already been optioned for film and they aren’t even released yet!
When asked why series vs. stand alone novels Ridley Pearson summed it up best: Single = growing plot while Series = growing characters. In series you just have more time to develop them.
They focused a lot of the suspension of disbelief and how that is vital when creating worlds, especially ones rooted in ours, and how you have to believe in the world if you want your readers to.

Cassandra Clare and the Mortal Instruments! Along with the director Harald Zwart. 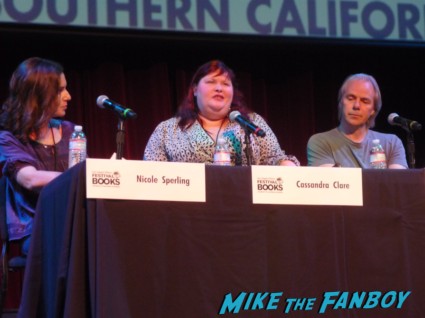 I’m super stoked for this film. Yeah, there are so many things in the trailer that look different than the book but I’m keeping my fingers crossed, especially because Cassandra Clare worked so closely with the director and producer in regards to casting and getting the world right. She said the producer joked he’d rather people say “Cassandra, Robert and Harald ruined the movie” than her say “Robert and Harald ruined my movie.” HAHAHAHAHA….awesome. The room was packed and I was in a sea of teens. Lots of “OMG, OMG, OMG I’m gonna DIE when she comes out!” Ah, youth. 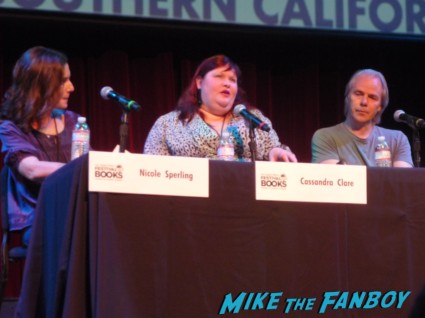 When the book was first optioned it was before Twilight or The Hunger Games were films so they didn’t think a book that focused on a teen girl would sell. They wanted to make it more about the boys and action. When Harald took over he decided to take it back to the roots and make Clary the focus again.
Lily Collins is the only actor Clare had no hand in casting. Harald described the casting process as a form of world building unto itself (seemed to be a theme for the day) as you lay out your main actors headshots and then arrange others around them. After auditions, you use that visual reference to really see how the ensemble will fit together.

Clare was writing the last book while she was visiting the set and the actors kept coming over to find out if they die….LOL!
She enjoyed seeing the sets and seeing how in just a statue so much can be said that takes her pages. And that since the movie isn’t tied to just Clary’s POV like the book there are some scenes they worked in that Clary hears about later. *Hint* *Hint* Magnus healing Alec…tee hee hee.

I ducked out during the Q&A because I knew the line for her book signing would be long. Um, yeah… 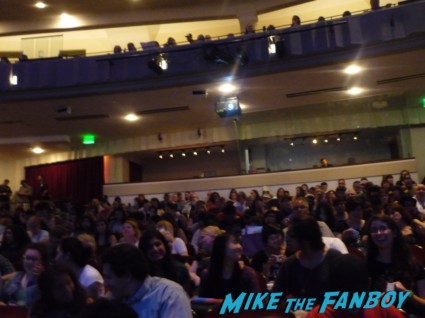 It took two hours to get through and I was only a few people from the cut off point. But Cassandra Clare is so awesome she stayed past her signing time so she could fit in as many people as possible. I adore when authors show their fans that kind of love. While standing in line for that long, I made some friends (quite a bit younger than myself).

One of the girls was so excited since this is her favorite series. Another group behind us had a member step out so a girl who was another super fan of the series could get in line (we still thought a lot of people weren’t going to make it). That girl broke down in tears she was so excited. It warmed my heart. 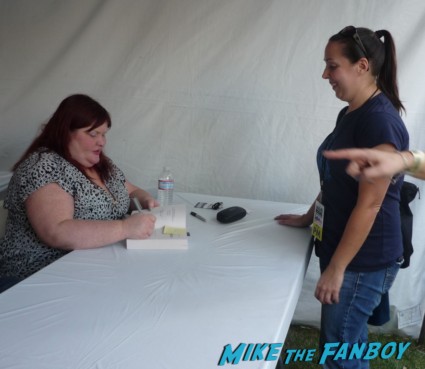 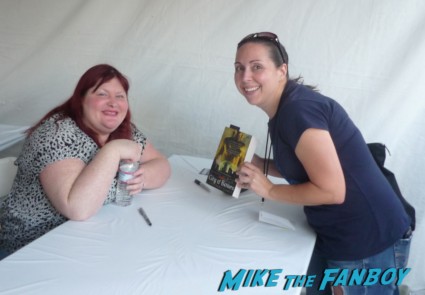 Here’s what I loved most about that 2 hour line and YA authors in general. These books bring together generations of readers like no others. Everyone is so excited about them and by them that you can talk to anyone and they don’t shun you or shame you. I loved all the people who walked up to ask us who was signing since they’d never seen a line so long, this is before the movie comes out so it’s all about the book. Two hour line for a book, for an author, for readers of all ages to connect. Amazing. Before one of my panels there was a woman asking us about books and authors because she wants to read them so she can connect with her granddaughter. YA is such an amazing genre that gets a lot of flack sometimes because of its subject matter, or because (like the Romance genre) it’s seen as fluff.

But I defy anyone to take a “straight” fiction novel and see it bring together so many people like this across generations. Genre novels unite so many of us because they aren’t normal, and like those teens said – it makes us ok with that.

By the time that signing was over it was nearly 6pm and the Festival was closing for the day. Needless to say I hadn’t seen anything of the tents and vendors. But here are a few things I captured on my travels to and from panels. 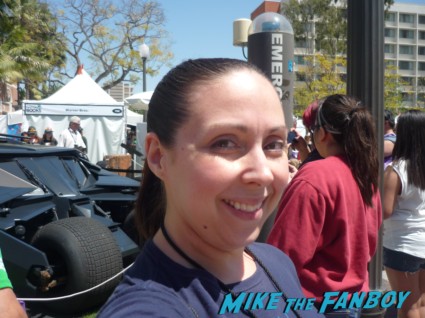 An entire tent devoted to self publishers like Xlibris… 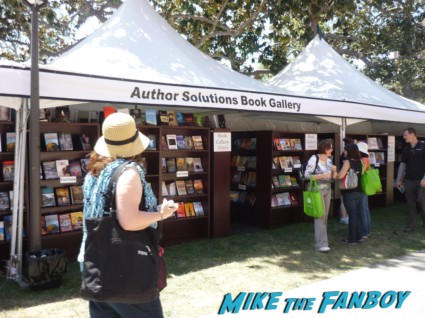 Llama, Llama in his red pajamas 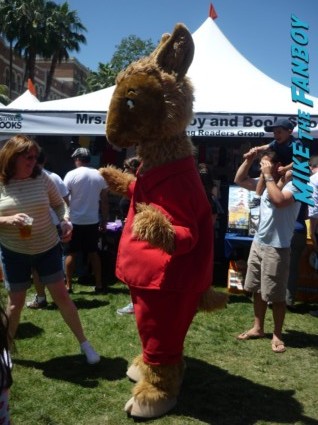 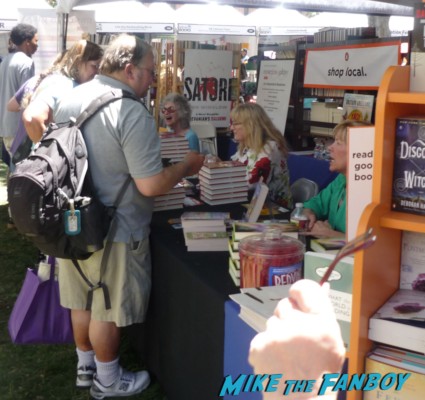 By the time I got home I was wonderfully exhausted and happy to have captured one more signature to add to my collection: 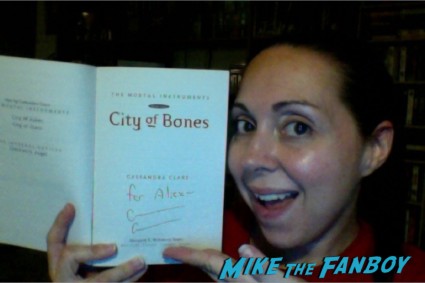