Books, books, books people!  That’s what this two day extravaganza is all about.  Mystery, Fantasy, Sci/Fi, Romance, Historical Fiction, Biographies, Cooking, Children’s….there is honestly something for everyone.  The best part is walking around and finding new authors, some may be self-published, some signed with a major house, some even got their books done thanks to Kickstarter, but the best thing is they are all here together and attendees get to see them all.

I’ve been coming to this for years and it never gets old.  I didn’t even attend one panel today because I was so busy walking around, meeting new authors, and …. doing interviews!  Look for those soon.  Today, however, I wanted to go ahead and post some of the images from Day 1.

Arriving at the Festival: 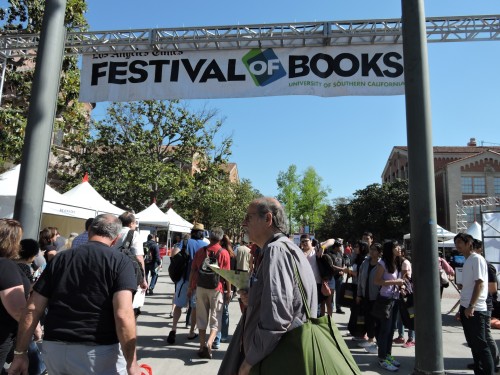 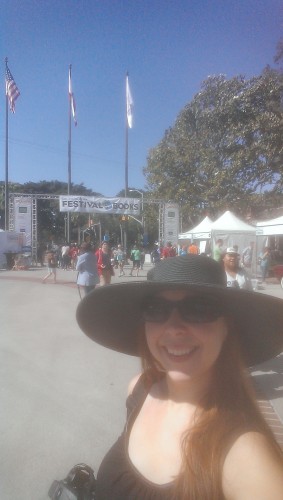 First got some coffee, then headed to pick up my press badge but along the way I passed the Pantages Theatre booth and what did they have but the most awesome thing ever….”PHANTOM OF THE OPERA” COSTUMES!!!! 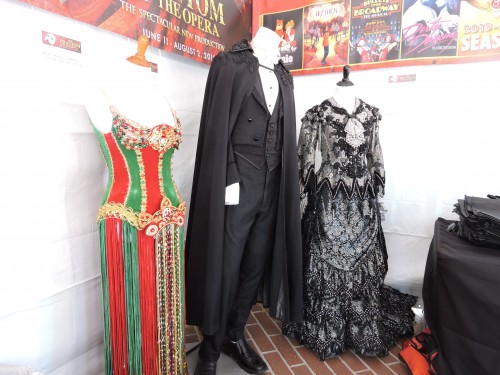 Pantages Theatre Exhibit: Actual Costumes from “Phantom of the Opera” 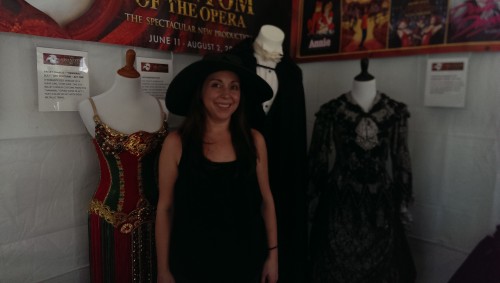 Myself and “Phantom of the Opera” cosutmes 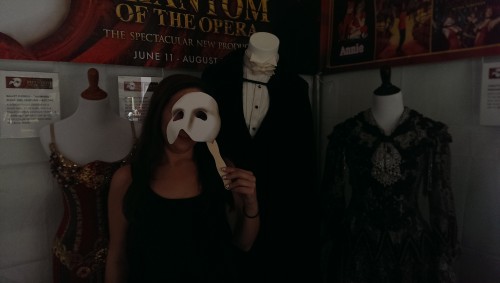 Getting into character with the costumes

This is my most favorite musical of all time!  I’m serious…I’m obsessed with Phantom and to stand this close to actual costumes used in the show….best thing ever!

After my friend managed to pull me away from the costumes – it wasn’t easy – I picked up my badge and we hit the Festival tents where we ran into the best sign ever: 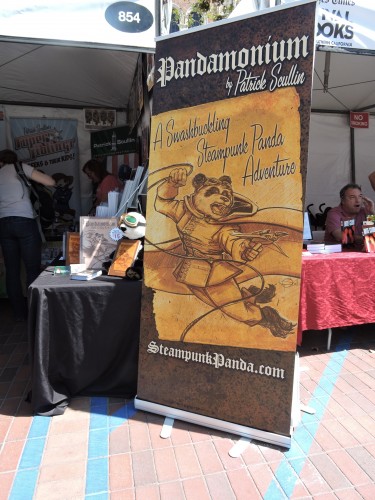 Probably the greatest sign at the Festival of Books! 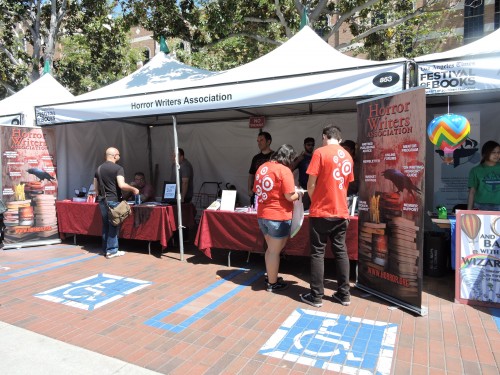 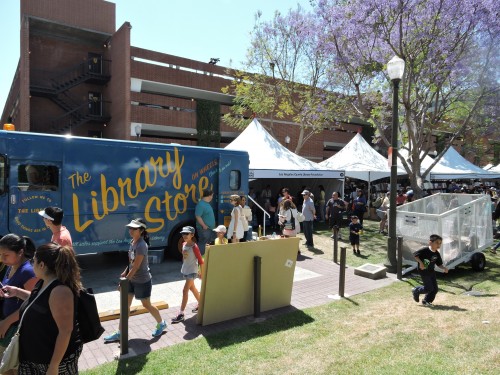 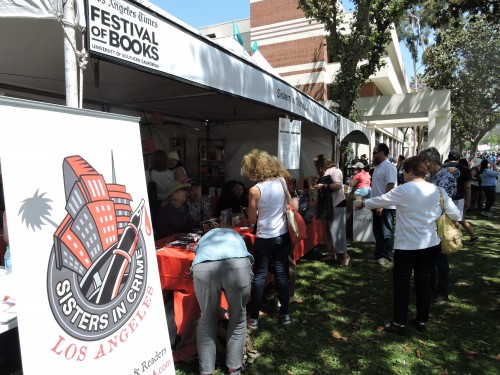 One of the stages: 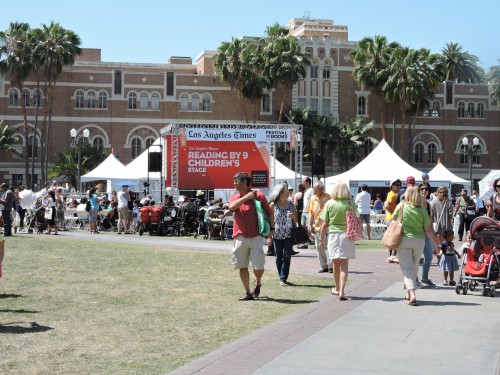 Children’s Stage at Festival of Books

Eventually my friend had to get to a panel with Patton Oswalt so I was on my own.  I had a couple of interviews set up for later in the day, but still some time so I headed over to the Mystery Ink Bookstore tent and found two authors I was intrigued by so I bought their books and got them signed: 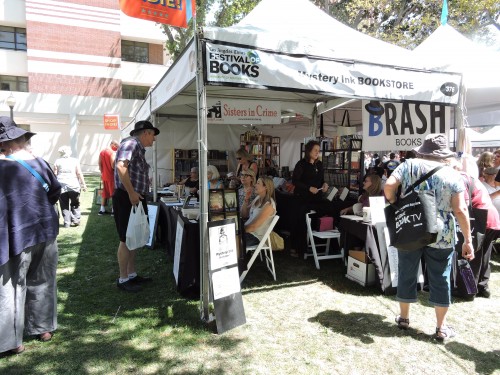 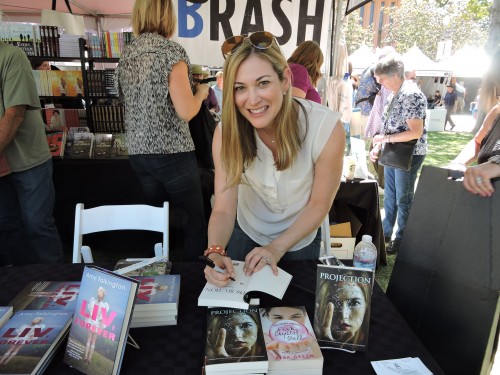 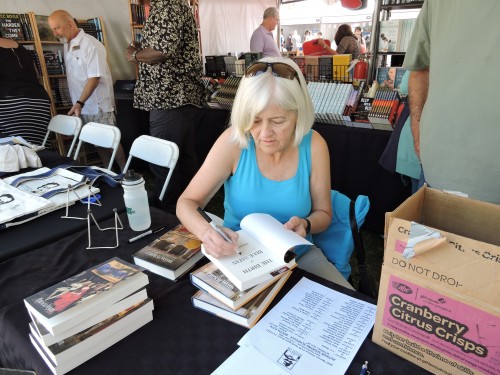 Patricia Wynn signing her book “The Birth of Blue Satan”

Then I walked by a tent with three authors who have some intriguing sounding books, which I’ve downloaded on my Kindle: 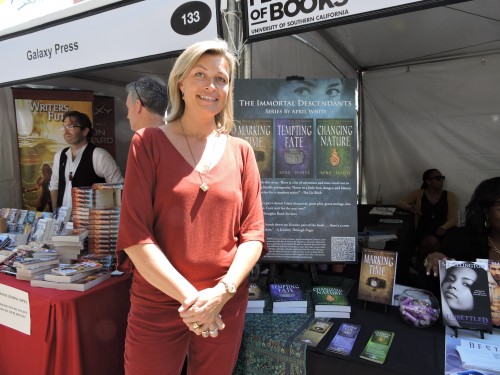 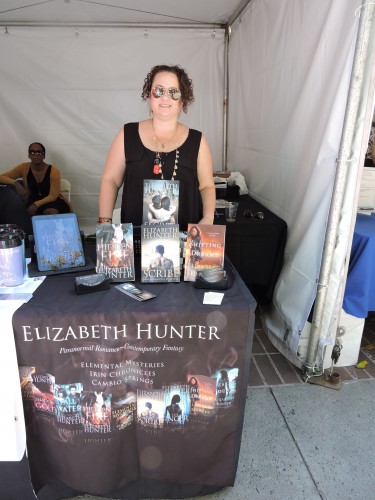 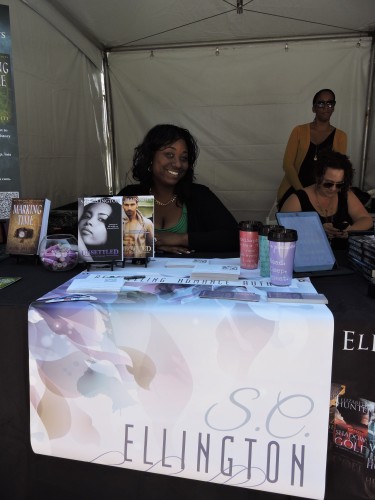 Next I headed to the “What are you Reading?” wall where I got to enter for a chance to win a gift card to an independent bookstore of my choice (which is an awesome idea) and then I got to signing: 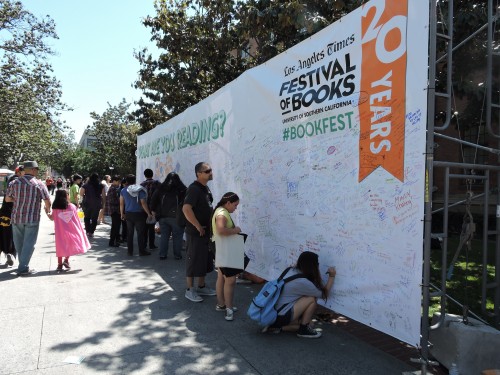 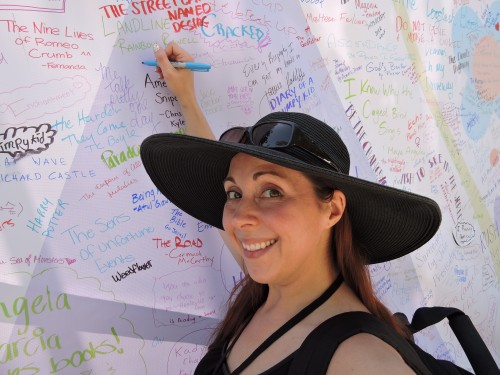 Novel Strumpet signing the “What are you Reading” wall 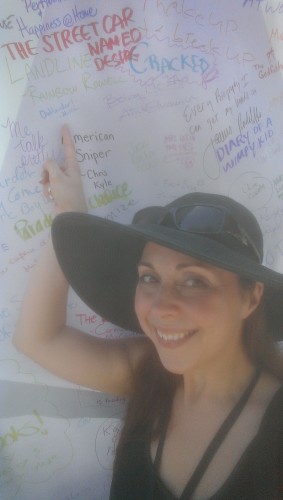 I mean I had to write that…hee hee.  Honestly I am reading it again since The Lovely Erica and I are doing weekly episode recaps you can read on this site.  SHAMELESS PLUG ;P

I walked by some artist booths: 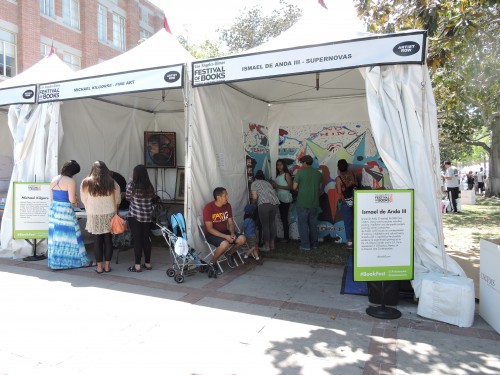 Artists at the Festival 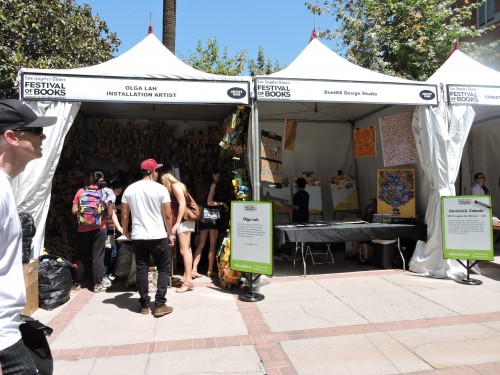 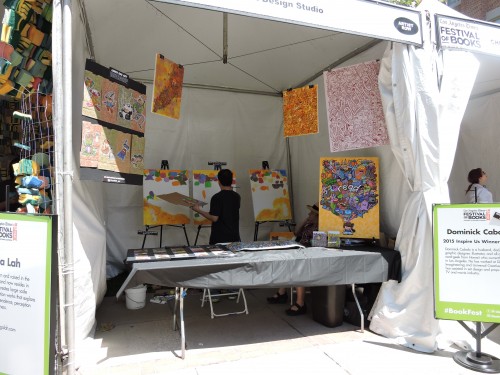 Artist painting at the Festival

Then was intrigued by Book Soup’s wall of great and infamous authors: 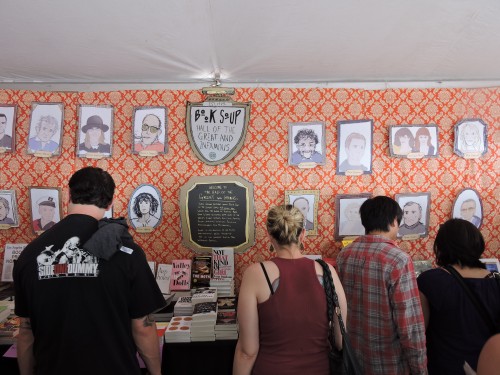 Where I found this awesome tote: 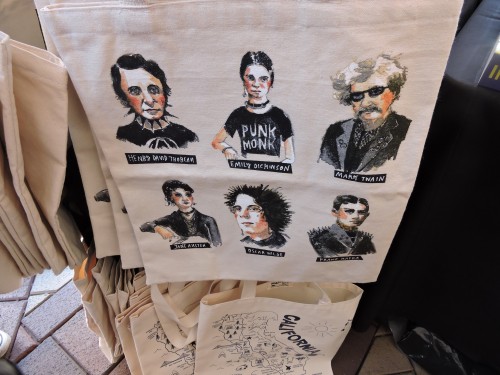 I also found the Romance Writers of America booth.  This was their first year at the Festival, fingers crossed this becomes tradition for them 🙂 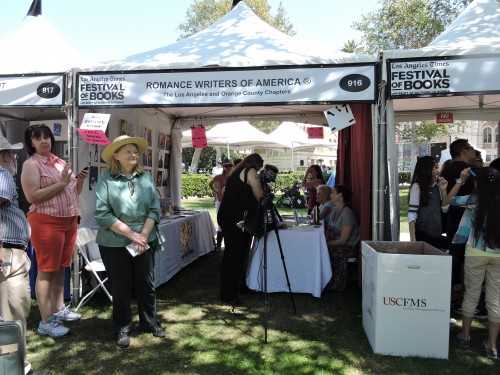 Romance Writers of America Booth at the Festival

Then it was time to head to my first interview (which I’ll post later) with Rachel Berman who wrote “Aerendgast” a book that asks “What if Jane Austen was secretly married and had a child”….ooooooohhhhh, intrigue.  The book is published by Meryton Press who specializes in books based on Jane Austen and Regency works. 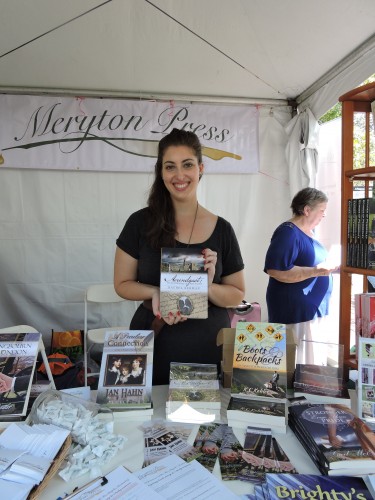 To stay on theme I headed over the Jane Austen Society of North America’s tent right after where an author was signing copies of her new book – so of course I had to get one and have it signed: 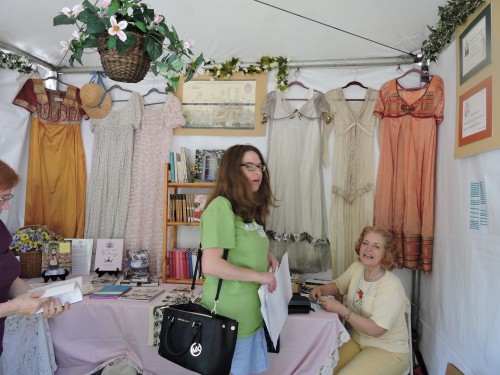 Inside the JANSA tent at the Festival 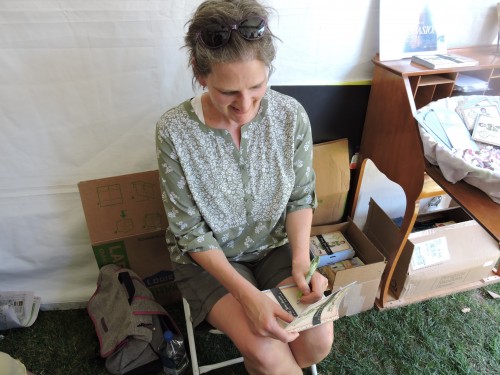 Then I spotted the tent for an author I had heard about being at the Festival.  He got his book published through a Kickstarter campaign BEFORE Kickstarter became the ‘thing’ so that’s some awesome forethought. 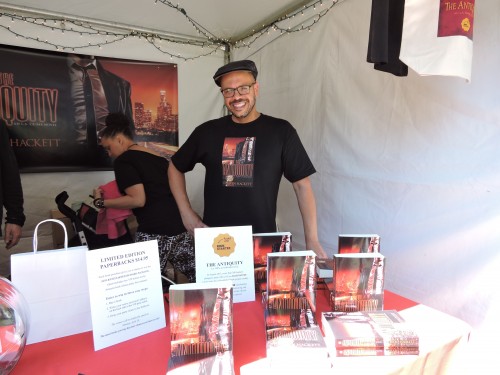 Darren Hackett with his book “The Antiquity”

Then it was time to head to my next interview with Andi O’Connor who writes Fantasy.  Again, I’ll post the interview here later: 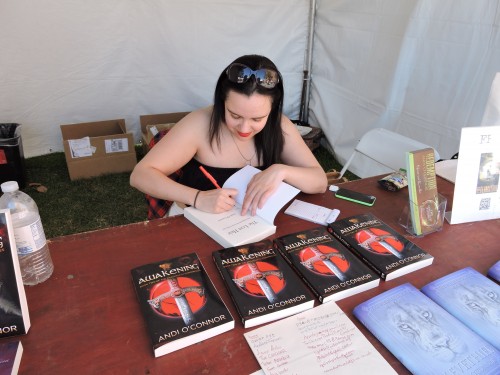 And that was my day!   It was pretty warm and sunny so I’m glad I wore the hat.  First time I’ve left the Festival without a sunburn.

Anyway, this means I have lots of new books to read and review and some interviews to get written up for you guys.

Day 2 is tomorrow and I’ll be hanging with my friend Kelly from GotFiction.com…so there are sure to be shenanigans ;P

Now to get started on those books….