So I had all this stuff planned out for day two (you can read about my day one adventures here) at the L.A. Times Festival of Books.  I was gonna sit on panels for Veronica Roth, Daniel Handler and Deborah Harkenss and get books signed by them all.  Then I realized I already had my copy of Divergent signed, I needed to get the new novel by Daniel Handler, but I did have Shadow of Night so I packed that up and headed back to the Metro station to meet Lisa and head down to the Festival.

I don’t know why I was so exhausted this morning but I needed coffee real bad.  Once we got to campus we headed to the Coffee Bean and Tea Leaf to get some much needed caffeine before heading to the Veronica Roth panel.  Obviously we weren’t the only ones with this idea. 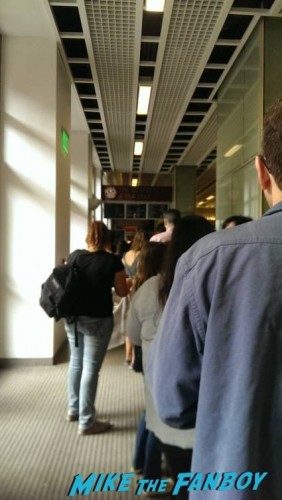 Once we had the precious we headed over to where the panel for Veronica Roth was going to be.  I was lucky enough to snag a couple of seats in the second row and then we just had to wait until 11am for the panel to start.  It was 10:20am.  The venue started to fill with the energy of uber excited people who are fans of the Divergent trilogy. 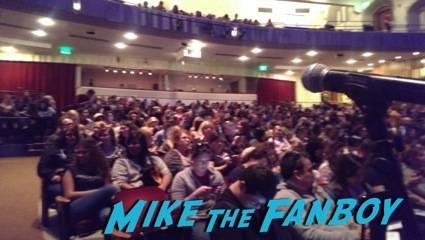 That’s not even all the people who wound up filling in the venue.  I started talking to some of the people sitting around us and found out that they were handing out tickets for the signing, which meant that if you didn’t have one of those tickets, you couldn’t get in line to get the book signed.  I understand why this is a bad idea if you have conflicting panels and would just like a book signed.  However, I LOVE this idea because it means you can’t have vendors, resellers, etc. camping out in the line so they can get signed books for resale which keeps real fans from being able to meet their literary hero.  It also helps to keep the line to a reasonable size.  I heard the John Green panel the day before was 3 hours long!

Finally it was time for the panel to begin and there was the requisite sounds of squeals and applause as the author took the stage along with another YA author Leigh Bardugo  who wrote the The Grisha Trilogy and more: 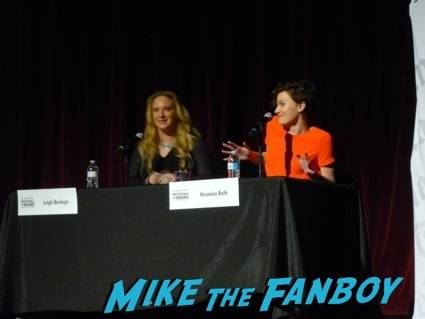 I’ve heard Veronica Roth on a panel before and she is quite fun and clever and so is Leigh Bardugo.  This was one of the more entertaining panels I’ve ever seen.  They sort of interviewed each other and both are hysterical!  They had us all laughing the entire time and I was really sad when the panel ended.  I was thrilled they never opened it for audience Q&A because I was having too much fun listening to these two banter.  I’ll do a recap of the two panels I sat in on for the two days later.

After the panel, I got a text from my friends Heather and Kelly of GotFiction.com who had finally arrived so Lisa and I parted ways.  I met up with my book gals and we headed around to see what trouble we could find.  Kelly hadn’t been to the Festival since it had moved from UCLA and this was Heather’s first time so we didn’t really have an agenda.  Just to walk around so they could see what it was all about. 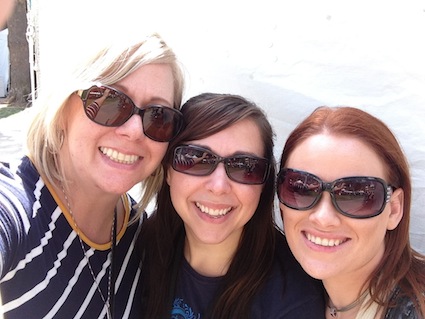 Of course being with these gals is always an adventure so we ran across a tent where a book poster caught their eye.  And we headed over to see what it was all about.  The title was Piper Day’s Ultimate Guide to Avoiding George Clooney by Christina Cannarella and Vanessa Fewings.  Kelly was all about the book, so she started chatting up Christina while Heather and I started speaking with Vanessa about her new erotica trilogy and Vampire romance series.  I suddenly realized I’d met Vanessa Fewings before at WonderCon! 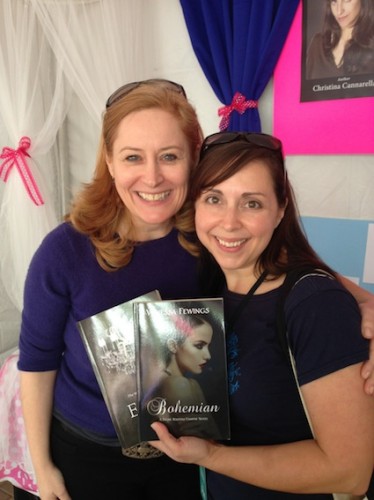 She was still gracious enough to give us all signed copies of her books.  We spent quite a bit of time in the tent chatting with them because they were so awesome.  I can’t wait to read both of these!

After leaving there we decided to look for food so walked back to where all the food trucks were stationed.  The lines were quite ridiculous and there were at least 10 trucks.  Crazy!  I finally got some type of Fillipino fusion taco.  Sounds strange but they were quite delicious.   From there we went to the Mysterious Galaxies booth to see what signings might be happening and then got sucked into their deal of ‘Buy 3 get 1 free’ so that took some time.  I mean getting a book is a very serious business.  Once we made our selections we went to find liquid refreshment and sat down to some tea/lemonades (Heather and Kelly) and Iced Vanilla Latte (myself).  We started chatting about books, ideas for a silly one we could write, other book conventions, etc.  Then it started to get really chilly and we realized it was 4:30 so the event was going to close in a half hour.

We walked around some more and #PocketJaime had to come out and get his picture taken as a mermaid: 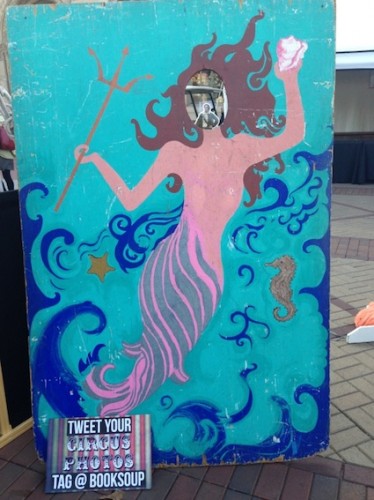 We found a discount book tent so Kelly did some cookbook shopping and that closed the place down.  That’s right people.  I officially closed down the L.A. Times Festival of Books!!!  You can all bow to my awesomeness now.

Needless to say I completely missed the other panels and getting those books signed, but I still got these: 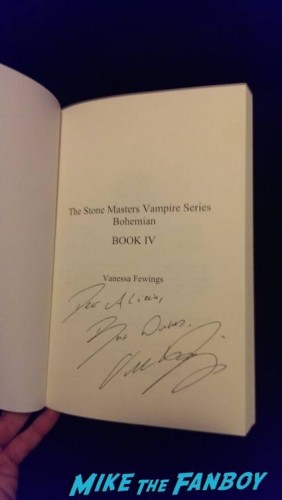 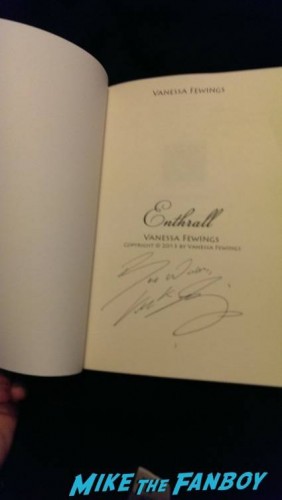 And we walked by the Artist Row so I could see how the book sculpture was going: 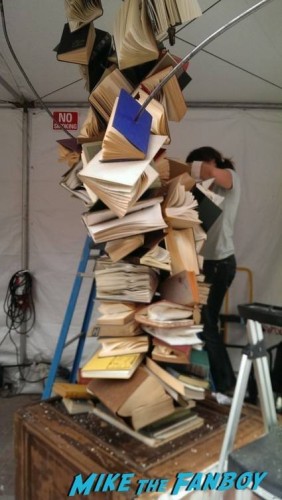 So that’s a wrap for this year.  For the most part, it was another great year.  Everything is so easy to get to and I think the fact that I mostly didn’t do panels gave me a whole new appreciation for how large and eclectic the Festival really is.  I did realize that it’s the panels, more than the booths, that cater to genre fiction fans but I still managed to find some fun new authors.

So once my brain is no longer mush and I’ve had a chance to sit down and read the new books I acquired I’ll get some reviews up for you guys.  (Remember when I used to do that? Hahahahahaha).