Whoo Hoo MtF peeps, I’m participating in a spotlight tour for an author and you all get to join in on the fun.  That is super exciting!  So who is the author? 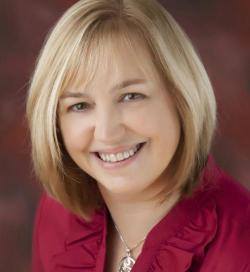 Laurin Wittig was indoctrinated into her Scottish heritage at birth when her parents chose her oddly spelled name from a plethora of Scottish family names. At ten, Laurin attended her first MacGregor clan gathering with her grandparents, and her first ceilidh (kay-lee), a Scottish party, where she danced to the bagpipes with the hereditary chieftain of the clan. At eleven, she visited Scotland for the first time and it has inhabited her imagination ever since.

Laurin writes bestselling and award-winning Scottish medieval romances and lives in southeastern Virginia. In 2014 she has two new books coming out. Highlander Avenged, book II in the Guardians of the Targe trilogy, releases on June 24th, and her first novella appears in The Winter Stone anthology, with fellow authors Tanya Anne Crosby and Glynnis Campbell. It releases April 21st. Both are available for preorder now.

But that’s all the boring “bio” stuff, here’s the more interesting facts:

Guess what she writes….YEP!  Scottish Highland Romances 😀   And today is the release date of her 2nd book in the Guardians of the Targe series “Highlander Avenged”: 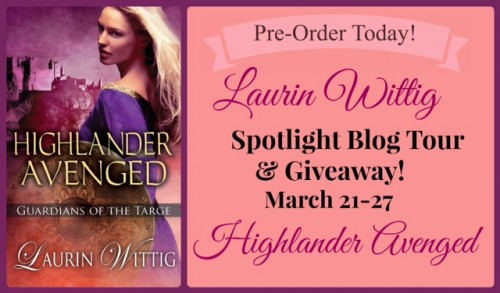 Although the English king tried to wrest it away, the Highland Targe—ancient relic and protector of Scottish lands—still lies safely in the hands of clan MacAlpin. But for how long?

Jeanette MacAlpin trained her entire life to become the next Guardian of the Targe, but that duty has now fallen to her cousin Rowan—a duty Rowan can’t seem to master. Fearful for her clan’s future, Jeanette seeks the solace of a sacred wellspring, and there encounters tawny-skinned Highland warrior Malcolm MacKenzie.

Wounded in battle, Malcolm is desperate to regain the use of his sword arm and strikes a deal with Jeanette. In return for her skills as a healer, Malcolm will advise the MacAlpins in their resistance against the English. And when he can once again swing a blade, he’ll return to the ranks of the Scottish army to fulfill his duty as a soldier.

But as passion grows between the golden warrior and the fair-haired healer, duty collides with love. Will they follow their hearts, or will clan loyalties keep them forever apart?

Ooooooo….I do love me some Scottish resisting the English stories (as many of you may gather by my incessant tweeting about Starz Outlander series and the adventures with #PocketJaime) and I just so happened to read the first of this series “Highlander Betrayed” and let me tell you…loved it!  In the first book you meet Rowan MacGregor and Nicholas Fitzhugh.  Nicholas is a master spy for the king (historical note, that was super illegal and punishable by death and trust me the king/queen would’ve denied all knowledge.  Hmmm…) and he also happens to be half-Scottish and a master of accents.  Convenient no?

The King wants this artifact known as the Highland Targe, because he’s trying to force the Scots to recognize his rule over them.  Oh how I could go on a long historical rant right now…but I’ll spare you all ;P  Essentially, whoever controls the Targe controls the Highlands, so all Nicholas has to do is find this Targe and return it to the King.   Easy peasy right?  Of course not, otherwise where would the story be?  First off, no one knows what the Targe is exactly.  Is it a shield, a sword, a stone?  Next, Nicholas has to work with another spy that he’s not exactly friends with – a competitor if you will – to try and get into the castle where they think the Targe is.  And finally, he really has to try and not fall in love with the woman he just rescued who happens to be the niece of the clan, of the castle, of the Targe.   So we all know what happens right?  He falls in love, betrays the King, pledges his loyalty to this clan, and it all works out in the end.  Sort of.  I mean, the King is none too happy so that’s not gonna go well.

I liked the first book in the series, so I’m excited to get my hands on the second!  And you should be too!  And look, we’ve made it easy for you to find both:

Add to your Goodreads Shelves today!

And here are some other fun places to check out the Author:

Oh, but the fun isn’t over.  There’s still time to win something from Laurin Wittig:
a Rafflecopter giveaway