Robots. Once thought to be dreams of the future, they have become our reality and – according to some nihilists – the future of our demise. But what if they aren’t an invention of the last 100 or so years? What if they’ve been around much, much longer than that? Essentially this is the premise of The Clockwork Dynasty by Daniel H. Wilson, author of Robopocalypse. 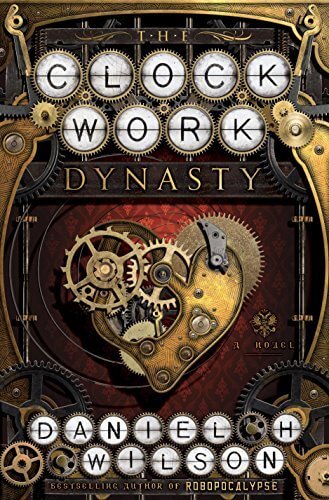 An ingenious new thriller that weaves a path through history, following a race of human-like machines that have been hiding among us for untold centuries, written by the New York Times bestselling author of Robopocalypse.

Present day: When a young anthropologist specializing in ancient technology uncovers a terrible secret concealed in the workings of a three-hundred-year-old mechanical doll, she is thrown into a hidden world that lurks just under the surface of our own. With her career and her life at stake, June Stefanov will ally with a remarkable traveler who exposes her to a reality she never imagined, as they embark on an around-the-world adventure and discover breathtaking secrets of the past…

Russia, 1725: In the depths of the Kremlin, the tsar’s loyal mechanician brings to life two astonishingly humanlike mechanical beings. Peter and Elena are a brother and sister fallen out of time, possessed with uncanny power, and destined to serve great empires. Struggling to blend into pre-Victorian society, they are pulled into a legendary war that has raged for centuries.

The Clockwork Dynasty seamlessly interweaves past and present, exploring a race of beings designed to live by ironclad principles, yet constantly searching for meaning. As June plunges deeper into their world, her choices will ultimately determine their survival or extermination. Richly-imagined and heart-pounding, Daniel H. Wilson’s novel expertly draws on his robotics and science background, combining exquisitely drawn characters with visionary technology—and riveting action.

I don’t know what to say without giving too much away.

It’s a complex novel, but well written, and if you like robots, fantasy, sci/fi – or hell – just a great story then I highly recommend this book.

As someone who loves history and alternative history, this was right up my alley.  I also don’t mind books with a sci/fi or technology bent to them so long as they don’t get too ‘tech speak’ and this novel does a great job of doing it in a way that I found fascinating and had me wanting to understand how all of these mechanisms worked.

I also wanted to know more about all the automats, ‘good’ and ‘bad’, because you know they all have to have really fascinating histories if they’ve lived for so long. I almost want each of them to have stand alone novels so I can get a deeper dive into their stories (ahem – hint, hint, hint 😜).

Overall it was a great and riveting (ha ha, get it? rivets?) read and I would suggest you add it to your TBR list right now.

You can grab The Clockwork Dynasty now: Amazon | B&N | Indiebound

I was lucky enough to interview Daniel H. Wilson while at Comic Con this year, so enjoy, but keep in mind there may be slight spoilers if you haven’t read his books yet.

The Clockwork Dynasty is set in the present and the past, while your other books are set in the near future. With your near future books, you get to essentially create the world so how is it different writing for eras that already exist and things that have already happened?

That’s a good question. With my near future books I get to project out a few years and it certainly draws more on the science/technology background and projecting out what the future of those will be. This was a lot more character driven, so it was less an intellectual exercise of ‘let’s put together a near future that’s consistent with the technology we have’ – which is very fun – but more about a super rich experience from a character’s point of view. You wake up and your this ‘thing’ in the 17th c. and you have to figure out the culture, the people, the way things work – it’s much more experiential vs. world building. You get to see all this stuff that’s already happened in a new light. I got to go back to some of the periods of history that I find interesting. It was a lot different than writing the other books.

What was it about these past automatons/clockworks of the past, that drew you?

Today’s society is very obsessed with the latest/greatest gadget and there’s a hubris in that. I love worlds like Lord of the Rings, Dune, or Star Wars where the old technology is the ‘good’ technology – you know “they don’t make them like that anymore”. You look back to look forward and there’s a respect in that. We’ve been obsessed with building technology for centuries and we still are. What I found interesting in researching these ancient robots, automatons, is that not only have we always built and been obsessed with technology, but with ourselves and the idea of recreating our abilities in the form of artifacts that are like us. These robots. Something about this intrinsic need…I love it. We think of robots as some chrome, killer, sci/fi, future technology and it’s not true. We’ve always been obsessed with it.

It was a change of pace for me and I respect the triumphs our ancestors have.

You have a background in robots, A.I. and computer science and this obviously influences your work.

Yeah you don’t get a degree in those fields unless you’re really fascinated by it.

So was there something you read as a child that influenced you to explore these fields?

In terms of being a kid, I loved short stories, pulp science fiction especially.

In terms of this novel, the Antikythera Mechanism really influenced me. In 1900 they discover this chunk of bronze in a shipwreck off the coast of Greece and these sponge divers hold their breaths and bring this thing up, and for 80 years they don’t know what it is and then they realize it’s a computer. It’s recognized as the world’s first analog computer. What’s interesting about that is that we found something that was over 2000 years old and it took us 80 years to come up with the technology to tell us what it is. Then you wonder, how much else is out there staring us in the face and we don’t have the technology yet to tell us what it is. So that really inspired me. A lot of what happens in this novel is that these automatons exist and don’t understand how they’re made, so they’re waiting on our technology to advance enough to tell them. Meanwhile they are manipulating and pushing our society towards this technological future for their own gain.

To me telling a story is like computer programming. You take these symbols, you lay them out in the right order, someone compiles them, and then you execute the program. That’s what writing a story is. You take these words (symbols), you lay them out in an order, the reader compiles them and they execute by feeling some emotion toward what they just read.

Genre for this book – it’s punk of some kind – not quite steam, not quite diesel, not quite clock punk…

I honestly didn’t know it would be considered steampunk until I saw the cover.

And reading it, it’s really not…

Some of the book takes place in London in the 1700’s, there’s Helsinki when it’s just a fishing village, ancient civilizations and modern day – with these machines traveling through them all. And they’re evolving, so what’s made of wood and leather one day, will one day be covered in plastic and carbon fiber, and materials we haven’t discovered yet. So if you like steampunk, it may scratch that itch but it’s not 100% steampunk. It’s a chimera.

What was your favorite book as a child?

This is horrible but, Sea of Glass by Barry Longyear. It’s a book filled with horrible moments of children being tortured and I should’ve never been allowed to read it at that age. It’s the classic example of I found a book, I read it, and it affected me profoundly. Can’t recommend it to everyone, but I have an attachment to it.

What book do you claim to have read?

I don’t do that, I don’t have the hubris because I was a scientist and not an English major. You know what I never did read? Dhalgren by Samuel Delaney, I was never smart enough for that. I read for pleasure.

What book do you wish you had written?

That’s such a hard question. I’m so territorial and jealous, so to say I wish I had written a book means I think I couldn’t have written that book and that’s just at odds with my ego (laughs). I do wish I had gotten better at writing comic books. I worked for DC for a year and I started to get the hang, but…

What author do you wish would put out another book right now?

Susanna Clarke who wrote Jonathan Strange and Mr. Norrell. I just love it. The act of reading it made me feel cozy. I’ll read anything she publishes.

Is there a trope that you think should die?

The things about tropes is that you can’t kill them, so you need to acknowledge and then subvert them. It’s like fighting a bull. Lure it toward you and then stab it. Like Robopocalypse – killer robots, right? But by the end of that book and into the sequel you realize this is not what you thought it was. I love robots and don’t think they’ll actually kill everybody. So the killer robot meme, I’m looking forward to that becoming more complex in the future. 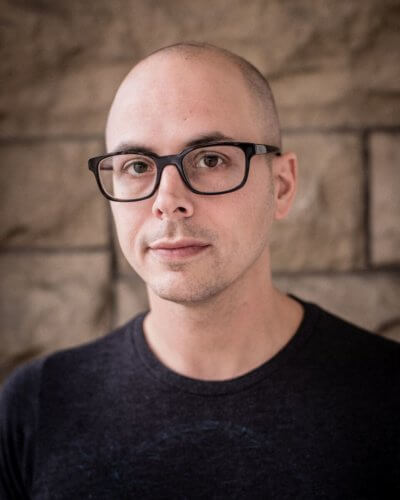 Daniel H. Wilson is author of the New York Times bestselling Robopocalypse, as well as nine other books. He earned a PhD in robotics from Carnegie Mellon University. His next novel, The Clockwork Dynasty, will be released on August 1st, 2017. He lives in Portland, Oregon with his wife and two children. Find him at www.danielhwilson.com or on Twitter @danielwilsonPDX
Share on Facebook