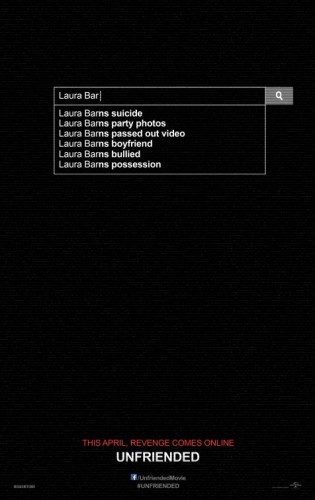 Blumhouse Productions has brought us such gems as: Paranormal Activity, The Purg’, Ouija and Insidious. During WonderCon they hosted a panel to let us all in on some of their upcoming projects including the next installment of the Insidious franchise and a new concept in horror highlighted in Unfriended. Yours truly was lucky enough to sit through the panel and Q&A afterwards to get a little more insight into these two films. I’ve decided to break them up into two posts, starting with Unfriended which hits theatres tomorrow.

The premise of Unfriended is nothing new: Group of teenage friends being terrorized by an unknown threat who is killing them off one by one in a seemingly revenge ridden ploy. This time the catalyst was an unflattering video of a teen girl that caused her to commit suicide exactly one year ago. Internet bullying at it’s finest. The entire film is told from the perspective of a chat room where the group has gathered to do…whatever teens do inside a chat room. Suddenly someone pops into the chat using the dead girl’s ID and the games begin.

The main difference between this teen horror film and others is in the approach. The actors were essentially their own directors, sitting in front of laptops with GoPro cameras mounted to the top and lights running around the screen to light them so they could be mobile with their laptops.

The idea was that of Timur Bekmambetov (who directed some of my personal faves Wanted and Abraham Lincoln: Vampire Hunter) who came up with the concept from his own experience in using Skype and other services to communicate with people since he spends half his time in Russia and half in the US. Timur shopped it around without success until Jason Blum picked it up for his company. It wasn’t so much the ‘gimmick’ that sold Blum as it was the story itself. According to Blum “I look for something that scares me and tells a good story. As soon as you’re not thinking ‘do I like this or not’ but really are looking at the story then you know it’s a good one.” According to writer/producer Nelson Greaves the way we interact with the internet and social media is spooky enough once you consider the fact that we never really know who’s on the other end of our email/text/post since we can’t see the other person. They just took that idea to the next level.

It seems that this production was determined to do as many things differently in the filming process as they could. For one, the entire cast was separated into their own rooms and communicated with each other in real time via the chat room. I asked some of the cast what the challenges were in making a film in this way vs. a more ‘traditional’ setting. Jacob Wysocki (Ken) said it was actually easier because everything was on them. They didn’t have to stand on a piece of tape and wait for camera angles or lighting to be adjusted and since most people are used to carrying a laptop/tablet with a camera around while holding online conversations, it made the process a little more organic. Courtney Halverson (Val) had a different issue in that she was trying to fight against her natural inclinations at first: “I tried to concentrate on the little camera so I was looking straight at the audience and then the producers told me to stop that because people aren’t doing that, they’re looking at themselves.” The cast was also encouraged to text during the shoot, they had another chat line open to talk to each other, and would do some online shopping during scenes. The idea was to give the audience the feel of what people really do when they’re on an online chat. They believe that the familiarity will be what makes this film terrifying to audiences.

That wasn’t the only difference in the way they filmed the movie. Shelley Hennig (Blair) begged them to try and do the entire film in one take because the start/stop was too draining given the high intensity nature of the piece. I was interested to hear what the other actors thought of the request. Like Shelley, Moses Storm (Mitch) found it more conducive to the shoot since they did a lot of improvising and it made their reactions more immediate since they didn’t have to think about camera set-ups and getting back into a certain mind set, or remembering what they had just been doing when they stopped. Will Petz (Adam) didn’t have quite the same reaction; “I was actually against it at first but it ended up working so well and we had such nice emotional transitions as actors…it was more natural and you could see the waves [of emotional highs/lows] – it was great.”

To keep the cast on their toes the producers would send them spooky videos or texts during filming or tell them frightening stories through the ear pieces the actors were wearing. From the little bits I’ve seen it looks like all of this attention to detail might just pay off and keep this from being a ‘run-of-mill’ teens gone wrong horror film. And let’s face it, Blumhouse has a pretty good pedigree of new and exciting horror stories so Unfriended definitely seems to have found the right home. 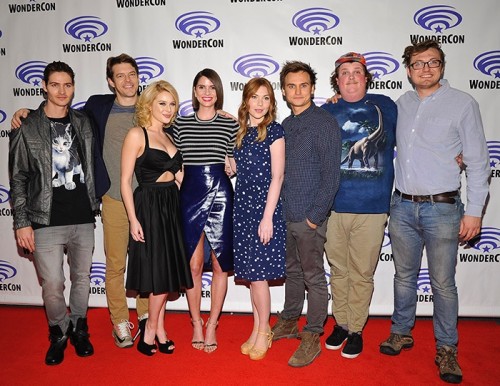 Like I said, the film opens tomorrow. I’d love to hear what you guys think! Leave me a message below or send me a tweet to @NovelStrumpet.