So I found three books recently that sounded intriguing:

1)   A typical historical YA love triangle story where one guy is dark and all wrong for the girl, the other is blonde and too above her in status and she’s in love with both and both turn out to hurt her in some way and she can’t choose but can’t stay away…you get the picture.

2)   A great new Steampunk adventure where London is divided amongst “Steam Barons” who control certain areas of the city and each is associated with a color – i.e. Gold King, Violet Queen, etc. – and they are so powerful that they control the city and all of it’s citizens. There is also magic involved which has been outlawed because it is more powerful than the “Steam Barons” so they want to snuff it out.

3)   A mystery book where Sherlock Holmes has a niece who is quite a little adventuress, and while not as smart as her famous uncles yet, she is quite bright and gets herself entangled in a rather dangerous affaire.

Unfortunately all three of these books were in the same novel and as such they felt completely disjointed. 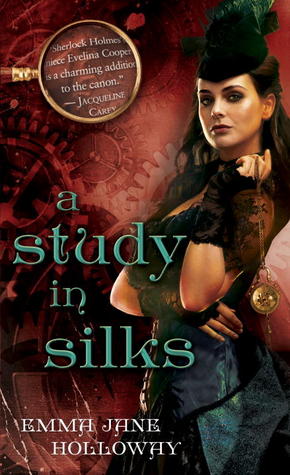 Evelina Cooper is the niece of Sherlock Holmes, not by Mycroft, but by some sister the author made up.  She also has two grandmother’s – Grandma Cooper who is a gypsy and Grandma Holmes who is an uptight windbag.  I could’ve handled the family the author felt she had to force into the story, but then…..geez….then she has to go and make Evelina capable of magic.  MAGIC PEOPLE!  Like Evelina can’t be smart enough on her own to match the mental prowess of her two infamous uncles.  Nope.  She has to rely on magic, which she uses to get spirits to help spy for her.  Ugh!

If that wasn’t bad enough, then she has to have a clichéd love triangle see #2 above.

The real meat of the book is the Steam Barons and how sinister they are.  A secret society that is out to rule, not only the city, but eventually the world.  Of course none of them want to share the power so they are always scheming to steal each other’s territories, let alone destroy the lives of people who try to stand in their way or rebel against their hold over everything.  Electricity, gas, coal, water…you name it there is a Baron that lords over it.   I pretty much speed read through parts where they were not involved because everything else seemed so mundane in comparison.

Oh, and there is a mystery involved because she is the niece of Sherlock Holmes, but it got so muddled in the magic and love triangle and politics, I’ve almost forgotten it was in there.  Which is not good for a mystery.

This is a case of an author putting too many ideas in to one book and it making me feel bloated instead of well fed.  I had heartburn after reading it.  It’s as if Holloway didn’t trust that any one plot device was interesting enough or that she had so many great ideas she had to use them all.  And why even have Evelina be a niece of Sherlock and Mycroft Holmes if she is going to rely more on magic to help her than her intelligence?  Why bring them in if all she’s going to turn out being is some YA Paranormal Romance heroine?

I really, really, really wanted to like this book.  I saw the series at Comic Con and was dying to get my hands on a copy to read.  I’m sad it turned out to be the book it was.  Ah well, on to the next…