The 37th “In Death” novel and in this incarnation of Eve Dallas, the intrepid Lieutenant and Company are trying to hunt down a killer who is just getting started.  Even though he’s an amateur, luck seems to be on his side, and as the bodies keep piling up Eve and her crew have a potential hit list that keeps getting bigger and bigger.  How do you catch a killer who’s only traceable M.O. is to kill anyone he feels has ever humiliated him, treated him badly or kept him from reaching his full potential?  And while they’re trying to track a killer, Eve and Roarke have to prepare for his Irish family and some close friends coming in to spend Thanksgiving with them. 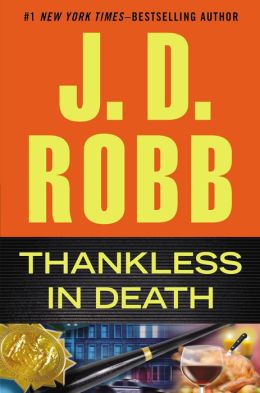 This will not be high on my list of favorite “In Death” books.  Not so much because of the story, but because I didn’t like this version of Eve.  Yet again I find that there are moments that stray too far from the version I feel we started with and not in the ‘oh the character has grown and changed’ way so much as ‘oh someone is trying to change the character to suit their voice’ way.  Something about certain words that suddenly become popular or personality quirks that pop up that were never there before really irks me.

Getting back to the story…eh.  I mean I still enjoyed it, but there was just too much other stuff encroaching on the main event.  I mean the holiday, the visiting relatives, the visiting family with the girl Eve helped save, some police politics (don’t want to spoil that for you), there was probably more but that’s what I can remember.  It’s just too much and makes the book a little scattered feeling.

I did like the premise of the “mystery”, I mean we all know right from the start who did it, but I liked the cat and mouse of it.  I just wish we’d gotten more of watching the gang piece together this kid in order to track him down.  Plus, I don’t know if this was intentional or not, I had to laugh at how much I felt this was a commentary on the past couple of generations.  The “me” era.  I mean here’s a kid that everyone has tried to help, given too many chances, and he still feels he’s entitled to everything and everyone is trying to hold him back.  Because they want him to get a job, clean his room, make decent grades, heck just apply himself at something that doesn’t involve his ego…but to him that’s oppression.  I could get on a soapbox here, but I’ll refrain.

Needless to say this kid is pathetic (I keep saying kid but he’s in his twenties) and a whiner, and that almost more than anything, is what crawls up Eve’s behind about him.  I can’t blame her, it did me too.

Overall, not the best but not the worst of the series, so I’d suggest that if you’re an “In Death” fan that you go ahead and give it a read.  And, what “In Death” review is complete without my usual…ROARKE!  RAWR….. ;P