Home / Fanboying! / WWE Wrestling Star Chris Jericho Knock’s CB Out Because He Is So Cool To His Fans! 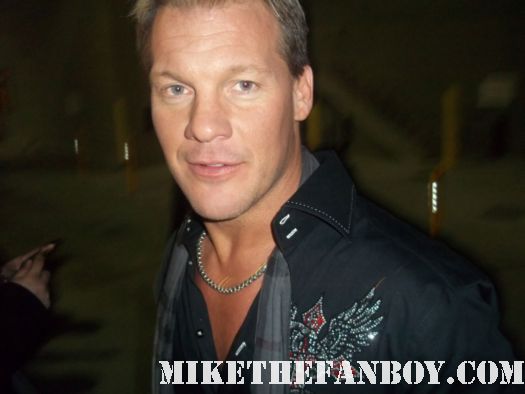 Ah wrestling… Or wrasling… lol… That’s what the kids call it these days. I used to watch it back in the WWF days, good times… Now however… not so much. CB is out and about for Mr. Chris Jericho, and living the wresting dream…

NANANANANANANANANA CB, CB, CB. You’re favorite mikethefanboy.com contributor is going to tell you a story about how me met, the Man of a 1001 holds, Chris Jericho. I’ve been a huge fan of wrestling and Jericho is one of the greatest wrestlers of all time. I’ve been a fan of his since he was going by Chris Lionheart Jericho, now that’s old. Of course, Mike was watching Buffy instead of wrestling, so he has no clue what I am talking about. Anyways, I got word Jericho was in the area, and since I was already here, I figured I would wait and meet Y2J. I only had photo paper and a camera, but I would really want a photo with the guy… BREAK THE WAAAAAAAAAALLLLS DOOOOOOWN!

8:00: Jericho has arrived, but said he’ll greet us after he’s done. Hope he keeps his word
9:00: He leaves and decides not to greet us and walks into the parking lot, then changes his mind and comes over.

He signs my photopaper and I ask him, “Can you please put ARMBAR on it.” He smirks and I tell him it was my favorite skit of his when he was feuding with Dean Malenko and said he knew 1 move more than the man of a 1000 holds. He takes a photo with me and is just a genuinely cool dude. Thanks Chris, until next time, same CB hour, same CB channel, same CB blog, KAPPPPPOOOOO!