Home / Featured • JM • Movie Reviews • Reviews / You Never Had It- An Evening with Bukowski Movie Review! JM Says, “Bukowski’s wild wisdom and whit will pair nicely with wine for a fun evening experience.” 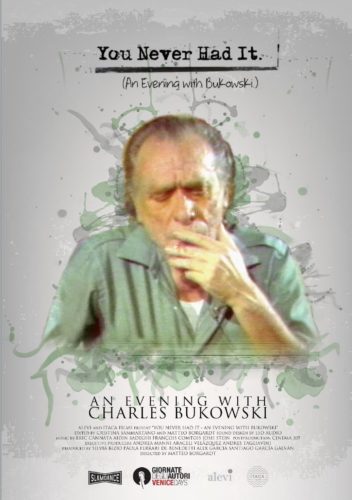 Alright barflies grab a drink and light up a smoke, it’s Bukowski time. Charles Bukowski fans can rejoice and remember the iconic literary figure with some wonderful unseen footage. Bukowski’s wild wisdom and whit will pair nicely with wine for a fun evening experience.

Recently rediscovered rare (and once lost) footage from 1981 has been assembled to create the short film “You Never Had It- An Evening with Bukowski.” Nearly 40 years ago, Italian journalist Silvia Bizio spent an intimate evening interviewing the infamous, profound poet and literary talent Charles Bukowski in his San Pedro home. Armed with a small crew, Bizio beautifully captures Bukowski at his peak and provides a wonderful insight with this terrific time capsule during a delightfully debaucherous evening discussing sex, literature, and life. Armed almost always with a glass of wine and a cigarette, Bukowski’s larger than life persona emanates with each subsequent salacious question and makes it abundantly clear why he’s so revered.

After being misplaced and thought lost forever, Silvia Bizio tripped up the vintage U-matic videotapes almost 20 years later after Charles Bukowski’s death. Now interspliced with contemporary Super 8 footage, Bizio fondly reminisces about her interactions and exchanges with the “laureate of American lowlife.” His sloppy social remarks and disturbing detailed depictions of womanizing won over readers worldwide, but contemporary audiences are absolutely appalled anyone of his pedigree would have seemed appealing. However, that’s the charm of Bukowski and he’s not for everyone. 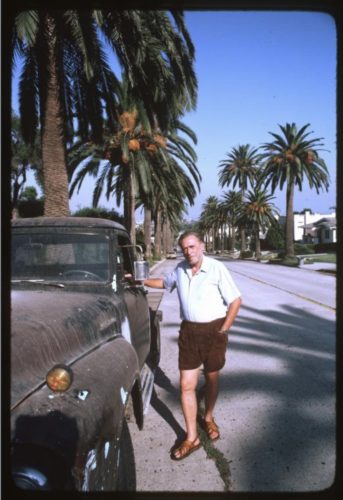 “I don’t hate people. I just feel better when they aren’t around”- Charles Bukowski

The uncensored, uninhibited and intimate interactions between Bizio and Bukowski create a cool conversational documentary that’s just shy of an hour. Unlike his public persona of a grumpy grouch, the cordial Charles Bukowski entertains with a funny and fascinating evening as though “talking amongst friends.” The infectious quips by Bukowski demonstrates how he knew to interact with his audience and how to entertain even in the most intimate of settings. This charming Charles Bukowski interview should entertain most viewers regardless of how familiar you’re with his works like “Post Office,” “Notes of a Dirty Old Man,” and “War All The Time.” There are better authors, but his complex charm definitely deserves further examination.

Directed by Bizio’s son, Matteo Borgardt, the fuzzy footage feels fresh and absolutely worth the words of wisdom by Bukowski, but you do feel short-changed that the film isn’t longer. If it weren’t for Bukowski’s wonderful whit, most of the questions would have fallen flat. Bizio’s constant fixation on sex and asking variations of why Bukowski was so obsessed with the subject matter even frustrated him causing some other topics to feel repetitive. Considering the interview lasted several hours, it’s a shame not more content was salvageable. Had the film been longer, maybe I would be more content, but like someone trying to get in one last drink before last call, you’re still craving more. Nonetheless, “You Never Had It- An Evening with Bukowski” is well worth watching.