Sometimes you have days that a whole bunch of fun and then there are days that it’s a lot of work. Thankfully, for MTF Reader Will he had a great day getting three people who are currently in plays.

Check out Will’s recap below!

All Taissa Farmiga, Zachary Quinto and Ed Harris are doing Off-Broadway productions (Taissa and Ed are in the same one), in theaters 2 miles apart, so I got a good amount of exercise yesterday. I brought an American Horror Story logo 8×10 for Quinto and Taissa, one 8×10 for all 3, and a Creepshow DVD for Ed.

We woke up at 6am and drove to the Hamilton, NJ train station, arriving in NYC at around 8:30am. After wandering around for a while, we stood at the Lucille Lortel Theatre on Christopher Street from 10am until 2pm, when the nice lady at the door informed me that Zachary Quinto was already inside, rehearsing. Either he snuck by us (doubt it), or he got there before we did. We then walked to 42nd & 10th to the Signature Theatre complex where Ed Harris and Taissa Farmiga were performing. There are 3 (4?) theaters in the building, and their stage doors all let out into a common area with a cafe and bar.

Ed Harris popped out first. He signed the Appaloosa 8×10 I brought and put the cap back on the pen. I asked him to sign the Creepshow DVD, and he laughed and signed it. I think he’s embarrassed by the film.

“If I took a photo with you, I’d have to take one with everybody.”

I’ll never understand that logic. Just look up for a second. We’re both here and you’re standing in one spot. 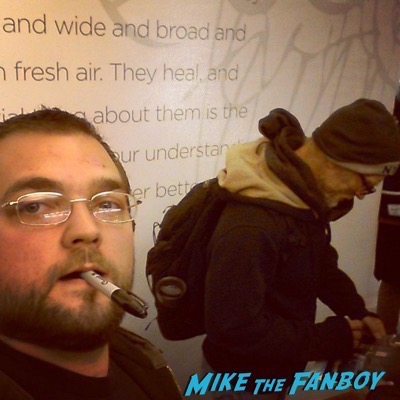 Taissa Farmiga came out and couldn’t have been cooler. We told her how much we enjoyed Wicked City and how sad we were that it got canceled. She seemed surprised that we brought the show up. I guess she thought nobody liked it. 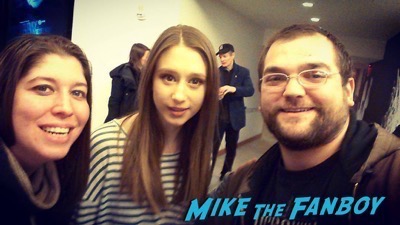 We ran out of the building and frantically caught a cab since we had 45 minutes until Quinto’s play let out 2 miles away. We MIGHT have made it if we walked, but we didn’t want to risk it. We stood around, and the play let out maybe 15 minutes after we got back. Quinto eventually emerged from the attendee entrance.

I approached him, and he saw me uncap the black sharpie. I handed it to him, and he put squeezed his thumb into the tip like it was a clicky pen. He saw me uncap it. I apologized, and he signed away. He was moving a little slow and wasn’t talkative. Or smiley. I was hoping he’d sign the pic of him on the light part of the photo, but nah. If I was a famous person, I’d try to sign stuff on a spot that would look the best. What do I know, though? I appreciate him doing it, at least. 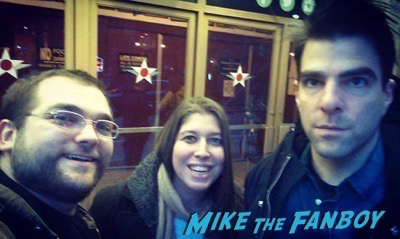 We got home at 8pm that night, and that’s pretty early for one of our autograph adventures.