Let me tell you, I don’t understand why people aren’t friendly when you’re paying them to get an autograph or photo? To me it just seems odd. I mean, having fans telling you how awesome you are, and what your work meant to them all day long must be really hard.

Pinky and Keith had a really bad experience with Robin AKA Burt Ward. I know!

Hello, my lovelies. Pinky Lovejoy-Coogan here still wishing I could have thrown a handy KAPOW Burt Ward’s way at the most recent Hollywood Show. 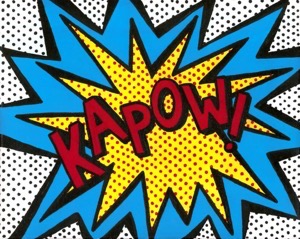 That’s right, kids: Robin is a bit of a dick. Now, it’s possible I’m being too harsh on him, who knows. It was my first time meeting him, so I didn’t know what to expect. Maybe Burt was having an off day and I’m overreacting. I mean, I’m sure having a line out the door of people willingly you paying you $60 a pop for your signature is enough to make anyone crabby (please note the sarcasm). 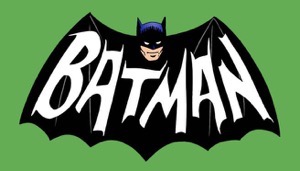 All I know is that after waiting so long to get our picture taken with Adam West and Burt Ward together, the last thing I expected was for Burt to be a jerk to my husband. It was rude and uncalled for and enough to make me want to ask for my money back and leave. 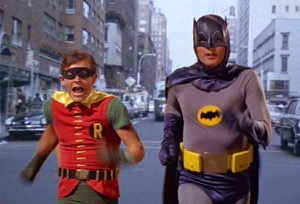 But I’m getting ahead of myself. I apologize. When I was little, I loved watching old episodes of the Batman and Robin television series. Although it ran from 1966-68 (before I was even born), they were still airing episodes of the campy show when I was growing up. 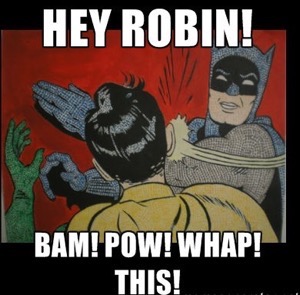 How I loved seeing the silly KAPOW! THWOCK! BAM! words come across the screen and all the bright colors of the shows. The villains had the best outfits and even as I’m typing this I can hear the theme song in my head. Batman was just a fun show all around and I’ve always wanted to meet Adam West (Burt Ward was just a bonus). From what I’d heard, Adam was the difficult one, but Burt was as nice as can be. 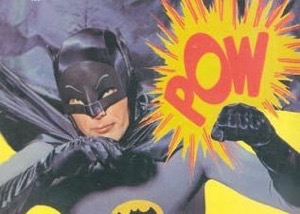 The line to get a picture with the duo was longer than any line I’d ever seen at the Hollywood Show. When it was finally our turn, before we entered the little photo studio, we were instructed not to touch them. Um, what? Where did that come from? Who wants to touch them?!?! Not me! After we entered the photo area, we were a bit confused at the set-up. Both Adam and Burt were sitting in chairs that were slightly far apart – not close enough to be chummy, but not far apart for more than one person to fit between them. I made sure to ask the photographer when we arrived how we should stand – do we go on the outside of each one? Because with the space in between them, that could be super awkward, too. The photographer told us to go behind them and lean in. Oh, and did I mention the chairs were fairly tall? (Side note: We’d heard rumors that Adam and Burt were fighting over who was sitting taller – Adam thought he should be taller – but Burt wanted to be the same height. Although we were told that Adam sat on a pillow to make him taller, from the looks of our picture, Burt won that battle).

Following directions, we went behind them and leaned in. That’s when Burt started freaking out, telling my husband that he needed to BACK OFF because he couldn’t move his back and we were too close. Um, OK. He kept on venting and while I can’t remember every word he said, it was the way he said it that was bothersome. A simple, “Could you back up a bit?” would have sufficed. As we were just following directions (we didn’t touch them; we just did what the photographer told us), we were a bit confused. As it was happening, I really wanted to say to forget the whole thing, but it didn’t seem like that would accomplish anything (or even get our money back). Plus, Adam was being cordial and nice and he was the main one I wanted to see. I tried to pretend Burt didn’t ruin the entire experience, but he did. And that’s unfortunate. Even though he’s surprisingly smiling in the picture, it isn’t something I’m going to look at and not remember what happened. So, thanks for nothing, Burt Ward. We should have done a solo Batman shot. 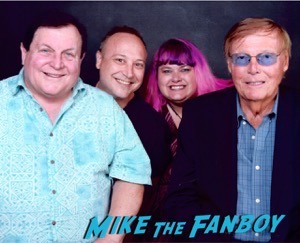