This is so awesome! MTF reader Jim headed down to the Captain America: The Winter Soldier set to check out things, maybe meet Chris Evans, you know the usual. He was nice enough to give us a quick recap and snapped a few pics before security descended. LOL…

So a give thanks to Jim for passing these photos along! I’m stoked!

I wanted to drop you a line about the Captain America 2 set visit in Cleveland. The attached pictures are of Sam Jackson’s double getting ready to get into a bullet riddled S.H.E.I.L.D. SUV. 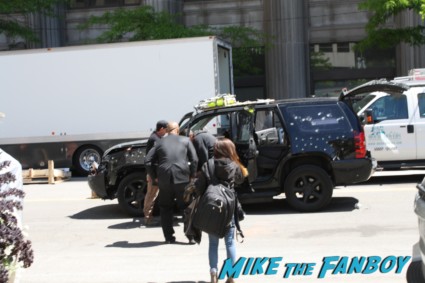 When I was walking up to the set and I saw this guy walking around with an assistant I really did think it was Nick Fury taking a break and like any good autograph collector I started to reach for my sharpie and at the same time pick up the pace a bit (not quite a run but not quite walking). I was a bit disappointed that it wasn’t Sam Jackson but that’s the way it works, they can’t all be wins. 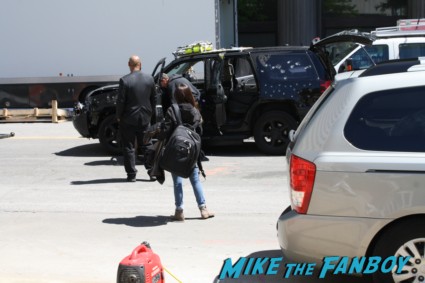 The best part was when my buddy caught up to me and started laughing and busting my balls, he just doesn’t understand. 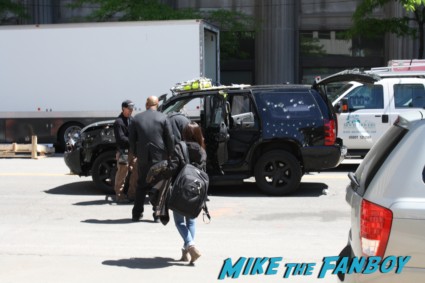 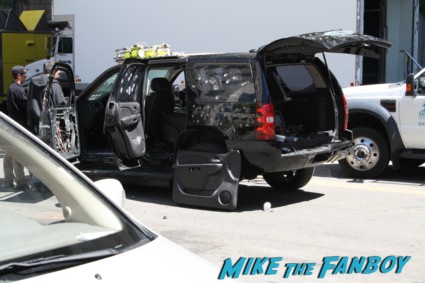 The rest of the afternoon was spent on an adjacent Downtown Cleveland street that was made to look like a section of Downtown Washington, DC. near the Smithsonian under some sort of attack. While I was there there a gun battle with civilians running for their lives took place.  With this scene taking place in DC I’m wondering if this could be taken right out of the comics???  Right before the director yelled action Marvel Security descended on us like locusts. “NO PICTURES” is what we heard over and over again. If you pulled out a camera to send a text they wanted to see it first to make sure you weren’t trying to sneak in a picture.

At one point some big goofball in a Gotham City Fire Dept. jacket came over to give a speech that put more people off than made them excited about being on set however watching people running for their lives while SHIELD agents were in the middle of a firefight made up for it. As everyone focused on the action all i could think about was how much fun it’ll be to see this scene play out on the big screen next April.

All in all it was an autograph fail but it was still a great time watching a movie being made and it didn’t even matter that Chris Evans wasn’t on set.

Here’s a quick tidbit about the shoot today. From what I heard today Chris Evans will be shooting a scene at a church in the Treemont neighborhood of Cleveland. While I was there I drove by the church and it just happens to be a couple blocks away from the house that they found the 3 kidnapped girls in a few weeks back. Pretty crazy huh?