The Lovely Erica is out and about at New York Comic Con and attended the Legendary Comics press event with Guillermo del Toro and Grant Morrison!

They were on hand to talk about some cool stuff including a Pacific Rim graphic novel prequel. Now, I’m really excited about Pacific Rim, one it stars Sons of Anarchy’s Charlie Hunnam and two… Giant robots! Hello! #awesome!

Grant Morrison is also working on a new film called Annihilator which sounds pretty rad! Check out his pic Erica just sent in from the press conference and the full press release below!

With these two projects added to the slate, Legendary is poised for an impressive 2013 with projects also being released by Mark Waid, Max Brooks, and Shane Davis (Shadow Walk) and J. Michael Straczynski (The Majestic Files) as well as further releases from The Tower Chronicles. 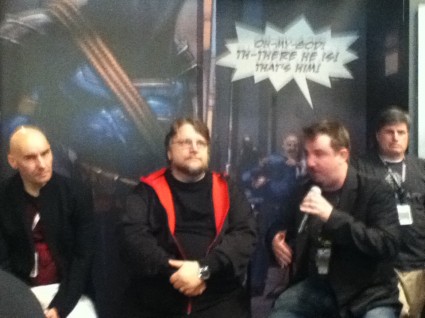 As fans continue to soak in all new details regarding Warner Bros. Pictures and Legendary Pictures upcoming motion picture release Pacific Rim, del Toro used New York Comic-Con to announce the Pacific Rim graphic novel. A must-read for anyone who wants to see the movie, the graphic novel will serve as a prequel, providing important details on the characters and the lead up to the story arc of the movie. Written by the film’s writer Travis Beacham (Clash of the Titans), the graphic novel is written in three distinct parts – covering the in-world history from the first attack up to just before the movie,

Each part tells a complete episode of that history, dipping selectively in and out of character backstories and sometimes focusing on new characters who aren’t necessarily in the movie. The idea is to expand the universe and explore how this war has affected not only our heroes, but the world beyond the film. That said, Stacker Pentecost’s (Idris Elba) origin will figure into all three parts, tracking his journey to high-ranking commander.

Morrison brings to the pages a thrilling story starring wild-living screenwriter Ray Spass, who has one last chance to save his career as he struggles to write a new studio tent-pole movie, Annihilator.

The film centers around the incredible adventures of Max Nomax; a sci-fi rebel anti-hero who’s condemned to a haunted prison orbiting a supermassive black hole, following an epic struggle against the all-knowing, all–powerful artificial life form VADA and his squad of deadly Annihilators. Found guilty of the Greatest Crime in History, Nomax has vowed to clear his name by discovering a Cure for Death itself and resurrecting his lost love.

But with deadlines looming and a recently-diagnosed brain tumor, Spass is running out of time and inspiration – until the real Max Nomax mysteriously appears in the world of 21st century Los Angeles with no memory of how he got there, only a terrifying warning of imminent destruction and a mission for Ray Spass.

Ray’s tumor is the key—it contains all the information of Nomax’s adventures, uploaded into Ray’s head before Nomax made his great escape.  Now, Ray has to finish his screenplay in order to get the information out of his head and shrink the tumor. Nomax needs Ray to finish the screenplay so he can remember how to defeat VADA and ultimately save the universe from extinction – if Makro, the unstoppable rogue Annihilator, doesn’t kill get to them first, that is.

But who or what is Max Nomax really?  And why is it the more we learn, the less we want to know?  A heart-stopping suspense thriller. A love story. An impossible mystery. A tale of vengeance and defiance – bargains and consequences – life and death – good and evil.