Okay, it could be worse, I could have quoted Look Who’s Talking!

Chuck Our Man in Texas heard a rumor that John Travolta was filming in his town. So he headed down in hopes that he could meet the Pulp Fiction, Grease, and pretty much every other movie under the sun star! Man, John Travolta has been in a lot of movies!

Chuck had an amazing experience and even got a couple photos!

I found out from various sources that John Travolta was in Beaumont, Texas, (where I used to live) doing some training for an upcoming film called, “Life On The Line.” It is about electrical workers that repair and maintain electric lines on the electric poles, etc.

After doing some research, I found out what hotel he was frequenting for production meetings, etc.

I printed up some photos and headed to Beaumont around 6:20am. I arrived to the hotel around 8am, and settled in for the wait. This particular hotel has a STARBUCKS in it, so I figured I would get them going to breakfast or coffee. Well no such luck. So I checked emails and played on my phone and around 10:18 I looked up and saw….JOHN “FREAKING” TRAVOLTA walk in the front door accompanied by 2 off duty but armed police officers. I got up and noticed he was on the phone, but he was headed toward the elevators. I don’t like to interrupt people, but I knew this might be my only shot. So I called out to him, and said, “John…Can I get your autograph, please?” He came over and took the sharpie and signed my 2 pics. I also asked him for a quick photo, which even on the phone he obliged. I thanked him and he gave me the thumbs up sign and hopped onto the elevator.

Well the picture was washed out because of the sun coming thru the glass windows, so I decided to wait until he came back down. I ended up waiting about 4 hours, When John came down the elevator for lunch, I asked him to retake the photo since the earlier one had washed out. He posed for the 2nd time, and this one turned out great. 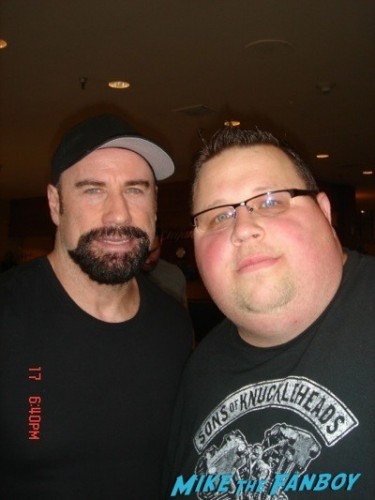 I thanked him several times and told him how much I have enjoyed his movies through out the years. He told me…”Thank You, several times..”

This opportunity was very unexpected and I was so glad to have gotten the chance to meet him. I have met a lot of people over the years, but he was one of the nicest. 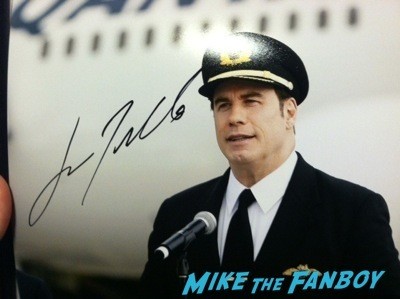