It’s all Hallows Eve! Gosh who can believe that it’s October already!?! Seriously, where has 2013 gone!

For this Halloween I know you want to have the best, the most fun costume… Well… I’ve got it for ya!

Since its Season Four Premiere this August, DUCK DYNASTY has become the biggest unscripted show in cable history.  Across the country, millions upon millions of viewers tune in each week for the latest exploits of the Robertson Clan and, now, this Halloween, fans of the series can walk in their shoes — almost literally — with all-new costumes available nationwide. 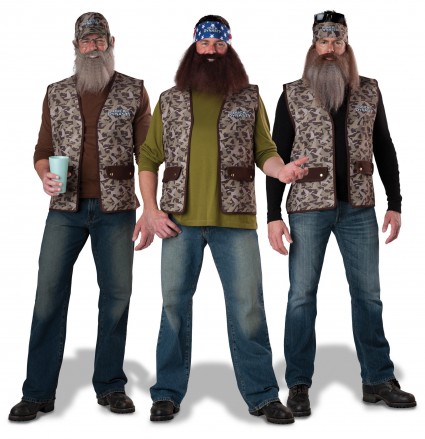 You may not be able to run a bayou-based duck hunting empire, have southern charm or a sharp sense of humor, but this Halloween, you can join the Robertson clan – in costume only – for some down home hijincks!

The costumes are currently available nationally in stores and online at Wal-Mart, Party City and Buycostumes.com.

And now… We’re giving one away to one lucky reader! Together with Jessica at Oh My Goodies (which is the coolest sweeps site ever, so you need to check it out!) we’re giving away an Uncle Si Costume!

Use the rafflecopter form below to enter!!