This is it!  Everyone is finally in the same century and we get to see more of our beloved (and not so beloved) characters from previous seasons:

And book readers have a rare episode where the discrepancies between page and screen really stand out.  Or maybe that’s just us.  Let’s discuss.

So Bree comes through the stones and treks miles to try and reach her destination. She’s injured and exhausted and still pushes through until finally collapsing near a house. Now in the book she winds up at Lallybroch and spends days there with Jenny and Ian, but Laura Donnelly – who plays Jenny Murray – had scheduling conflicts, so that may be why instead of the days spent meeting her aunt and family, the show has Bree spend a few days with Laoghaire (not knowing who she is to Claire and Jamie) who found her passed out on the road. It’s a real shame, but it’s an interesting change as well.  We see a side of Laoghaire we haven’t seen in a long while.  Someone who can actually have a good heart and seems to be a loving and devoted mother.  A woman who has been beaten down a bit by life and lost a great love, but shows kindness to a stranger and doesn’t ask for anything in return. For a moment you start to kind of like Laoghaire, but that quickly dissipates once Bree says the magic words: “Claire Fraser.” Then Laoghaire becomes the real nutter we’ve all come to know and loathe. And how about hearing how she viewed her entire relationship with Jamie.  Can we say delusional?  We’re also a bit sad that Bree doesn’t get Laoghaire to admit that she’s the reason Claire was nearly burned as a witch in front of Jamie’s family like the book, it’s only mentioned between the two of them. You also have to feel sorry for Joan and love her all the more.  This poor girl doesn’t have a bad bone in her. We all hope Laoghaire’s bitterness never penetrates Joan’s good heart.

Bree does make it to Lallybroch, thanks to Joan, and meets her Uncle Ian, and here’s another moment of pondering.  In the books, there is a lot said about how Bree looks a lot like Jamie (and his mother Ellen) – height, hair color, facial features especially her eyes – but Ian mentions she has Claire’s eyes.  We get it if the actress doesn’t have the same facial features, but even just a mention of her hair color would have been something.  It’s an odd thing that Ian doesn’t mention any similarity to Jamie at all since he’s so willing to believe she’s Jamie’s daughter. Also, we know Ian said Jenny was away helping to deliver a grandbaby, but the fact that he didn’t try to make Bree stick around just seems weird. We all know how Jenny is, and if she discovers she missed her niece she never knew she had, you know there will be hell to pay.  Were we just to get that it was implied that Bree had shared her “I have to save their lives” story with Ian as well so he felt it best to rush her departure? 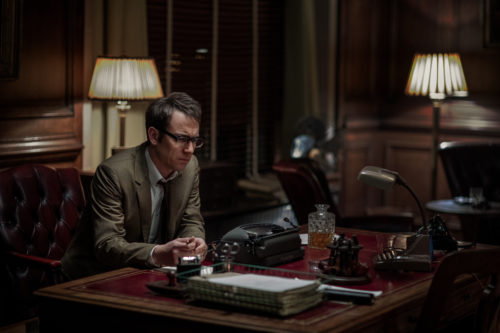 We did love the flashbacks with Frank, and not just because we get to see Tobias Menzies again. We all knew Bree loved Frank, but seeing these events leading up to the crash and his death are very poignant. Then the moment on the docks before she boards the boat to Wilmington, and sees Frank standing there, gutting. It’s almost like she’s saying goodbye to her Dad while going off to meet her father. **Book spoiler:  Are we going to get the scenes where Frank teaches Brianna the outdoor survival skills and how to shoot? It seems like he’s just learned that Claire would go back and *poof* he’s dead so there’s not a lot of time to see this English professor from Harvard go Davy Crockett. We’re still hoping we get those scenes in a flashback later on. End of spoiler** 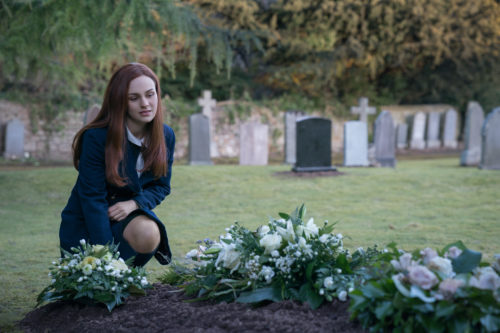 This brings us to Roger.  First off, what is that outfit? The short pants for winter and the outer coat that reminds us of the warm-up jacket football players put on over their shoulder pads, what is going on? Again, they both watched Claire build the batsuit, geez! Secondly, in the books, Bree has a 6-week head start on Roger so when he gets to the port town he asks around and finds someone who gives him affirmation that she did board a ship and sailed to Wilmington. On the show, he just assumes she’s already sailing to Wilmington, finds a ship, and goes.  So now he has the head start on Breanna.  Also onboard is a woman named Morag MacKenzie and her baby.  Who is not onboard, but is a character that comes up in the books often and plays a major part in Roger’s storyline, is Morag’s husband William MacKenzie.  And yes, that is Roger’s last name which is probably why he’s so eager to help her when the Captain starts tossing people overboard from fear of a smallpox outbreak. 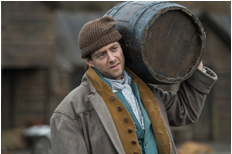 Oh, and did we mention how fortuitous Roger was in his choice of Captain? Why it’s none other than, Two-Face, er, Stephen Bonnet himself! You have to wonder at how he’s got a legitimate job sailing ships with passengers and cargo.  Is he not a pirate? Or is that just a hobby?  Hmmm.  We loved seeing the moment where he flips the coin for Roger’s life, in the book it really puts you on edge, and it didn’t lose any of that in the show, in fact, it seemed more intense on the screen. And that moment where he’s holding the baby, you’re just waiting for Bonnet to do something horrible but he just holds the wee one and helps to calm him down. It’s the dual nature that just keeps you guessing. We think he needs to twirl a mustache and cackle a bit more, just to help keep things clear.

It will be interesting to see how things shape up as Bree and Roger get to America.

Also, we’re interested in seeing if more of Claire’s clothes from past seasons will show up since Ian gave Bree a trunk of them.  Dare we hope that once Bree and Jamie meet, she’ll wear the Red Dress somewhere and an 18th century version of the father/daughter fight over the sexy prom dress ensues?  Fingers crossed! LOLOLOLOLOLOL!

Did any of you miss not having Jamie or Claire in this episode?  We admit it was a bit nice to really just focus on Bree and Roger.

Next week it seems we’ll be one step closer to the ‘reunion’: “Wilmington”

Roger’s diligent search for Brianna pays off when he finds her in Wilmington, but their romantic reunion comes to an abrupt halt when she discovers pertinent information that he intentionally kept from her. Meanwhile, Jamie and Claire attend the theater with Governor Tryon, at his request, and discover a plot against the Regulators that tests Jamie’s loyalty to Tryon.

So what did the rest of you think about this episode?