Ooooohhhh…a ‘flashback’ episode, which is really a sort of flash-forward since they are about Claire’s life in the ‘present’ day.  Also, Claire voice overs.  Just like old times 😉

Let’s get to some thoughts and slight recap:

Step into my Parlor said the Spider

Claire talks a lot about two things in this episode, one of which is a spiderweb and how it ties into time, etc.  I think the more apt metaphor is in regards to the weaving of those sticky strings of death and the predators waiting at the center.  I count two ‘spiders’ in this episode: 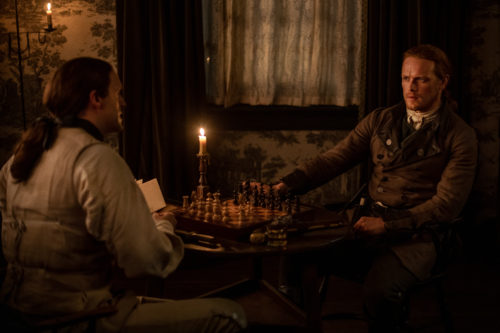 So this moment of chess where the spider draws his prey in is one of those rare times where Jamie does something that makes him human instead of the demi-god we all make him out to be 😉  Is he right to kill Knox?  Maybe, maybe not, but – as he points out to Knox – what would you expect a man to do when his family is being threatened?  And if there is one thing we all know about Jamie, it’s that family is the most important thing to him.  However, that is a thin thread to justify Jamie killing a man outside of battle.  This has been a fairly bloodthirsty season for Mr. Fraser.  It’s a little odd, no?

The Nature of Time

The last few words Claire utters in this episode ring a loud note for this series.  Time must lose its mystery when you have the ability to walk through it and possibly change its path.  Granted they couldn’t stop Culloden and aren’t going to try to stop the coming battles in America, but using penicillin almost a century and a half before it should be discovered has got to be messing with some continuity somewhere, right?

Then there are the threads (like a web) that you can follow to find the steps that led you to a moment.  For people like Claire, Bree and Roger those threads are not linear but loop and weave in on themselves like a ball of yarn and it’s only when they are actually knitting a moment in time that the thread straightens out briefly.  In this episode, Claire unravels the pattern of her life that got her to Fraser’s Ridge.  How losing a patient who reminded her a bit of Jamie, prompted her to visit London, where she attended Wakefield’s funeral, met Roger, learned of Jamie surviving Culloden and ultimately her return to Jamie (with Bree and Roger following not too far behind). 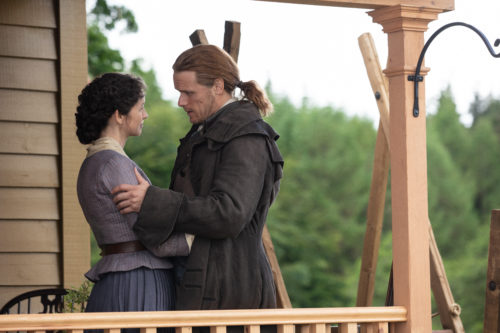 Geez, these two.  I admit that I have a hard time with these two in the books, as much as I do on the show.  They are two of the most stubborn people.  One moment they are an amazing power unit and the next they make me want to throw things at their heads.  Ugh.  So Roger is back at the Fraser’s Ridge and feeling a bit down because Jamie sent him back instead of letting him continue with the militia, and he’s pretty committed to his oath, but at the same time, he’s sanguine about being sent home.  A rare moment where Roger is reasonable.  But we don’t have to worry about that for long.  While caring for Jemmy he knocks over a box that Bree stores valuables in (like the pearls Jamie gave her) and he finds the black diamond. He knows this diamond because he saw Bonnet with it during a game of cards they played. Of course, he confronts Bree, which causes a row, and she essentially intimates that she believes Jem is Bonnet’s and not Roger’s. This is where Roger getting upset is frustrating because he swore to love Jem no matter and took a blood oath with the infant – so Bonnet’s child or not Roger adopted him and should just get over himself.  I mean Bonnet brutalized the woman you love and you have the nerve to get upset with her over this?  GRRRRRR….

Then after his overnight camping huff in the forest, Claire lays down some wisdom about marriage and he goes back, tail between his legs and becomes all over supportive again.  Then Bree tells him about an Irishman approaching Mrs. Bug and Jem in town and Roger becomes even more determined to get them back to their time the moment they’re sure Jem can travel with them.  And who blames him in this?  If I can save my kid from that psychopath I’d do everything in my power.  But Bree’s face says she doesn’t necessarily agree.

We’ve got penicillin y’all (which I’m guessing looks like paintbrushes under a microscope).  Claire finally gets her important life-saving mold and quickly goes about testing Kezzie and Josiah to ensure they aren’t allergic to it before removing their tonsils.  Which we get to see in graphic detail (at least with Kezzie) and makes me even more happy and thankful to live in a time where anesthesia exists.  There is no amount of laudanum that’s going to keep me from freaking out when you are cutting out something in my throat and then burning the tissue to close the wound.  Nope, no way, not happening.  Also, there is no way I’d let that giant needle near me (mostly because I have a huge phobia of them – childish I know but outside of spiders they are the thing I fear most).  But yay for penicillin nearly a century and a half ahead of its time.

Also, I love the difference behind how Marsali watches the procedure with rapt curiosity and Lizzie looks like she’ll barf any second.  I’d be the latter, to no one’s surprise.

I mean, he has to get his own mention right?  I’m not a cat fan – mostly because I’m allergic to them, but that little fluff ball is totally adorable.

Before we part company for this week, let’s give a shout out to Joe Abernathy for putting “The Impetuous Pirate” in the surgeon’s lounge for Claire to find and read.  Three cheers for Romance-landia!

So what’s on deck for next week?  “BETTER TO MARRY THAN BURN”

At Jocasta’s wedding, Jamie learns Tryon’s true motivation for ending the Regulator threat.  Claire discovers a lead on the whereabouts of a former enemy from an unexpected source, but the price for the information is far higher than she anticipates.  In Jamie and Claire’s absence, Roger and Brianna must save the Ridge from an imminent threat.

Also, I saw this gem posted in an Outlander Facebook group and when Jamie dismounted from his horse this episode I immediately thought of it.  Enjoy!