I have to say that I haven’t found the ‘Love Undercover’ series as much fun as some of Foster’s previous series, they’re still enjoyable reads, but I felt like something was missing. Reese and Logan were fun to read about, but I feel like we’ve been leading up to Rowdy (and Dash – I hope).  And I was really disappointed. 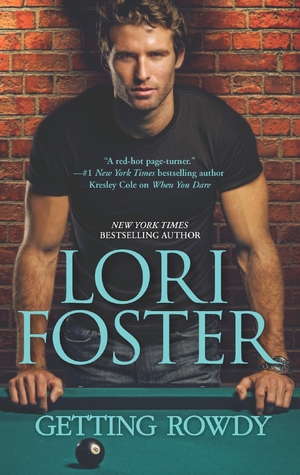 Avery worked at the sleazy bar Rowdy bought, and in the last book they’re flirtatious banter was really fun.  I was really looking forward to an entire story with them.  Especially because Rowdy bought the bar she works at and made her head bartender, let the sexual sparks fly!

She seemed like she was going to be such a sassy lady, and she is, but I just couldn’t connect with her story.  I mean the poor little rich girl angle was just…meh.  I feel like it weighed the story down.  I also found it a little…I don’t know…weirdly pathetic that she finally decides she wants to have sex with Rowdy after she witnesses him being – ahem – served in his office.  Why is that what makes her want to finally – and there’s no other word for it – f**k him?   I mean she already knows he’s slept with nearly every woman that walks into the bar, so why is that the catalyst?  I just don’t get it.  I lost interest in her really quick.

Which made me lose interest in Rowdy really quick because he likes her.

Of course there’s going to be an element of danger, and that comes in the phone threats toward Avery and even there I was let down.  I felt it kind of obvious who the culprit was.  I’m also kind of tired of these women who feel like they can’t be burdens on people to the point that they put themselves, and the people around them, into serious trouble.  I’m all about being an independent woman, but anyone (female or male) who is getting threatening phone calls or know they are being followed should NEVER keep that to themselves.  There is a difference between being a strong independent woman and dangerously stupid.

It’s a disturbing trend I see when females are the main protagonists and I feel it gives a dangerous message out to women.  Hell, to people in general.  I feel like it says “Hey, no one needs to be bothered by the threats on your safety, if not your life, so just keep that to yourself.”

Ah well, hopefully Dash has more sense and the next book I’ll get to see him and the Lieutenant battle it out…and then give in to their desires…. hee hee hee…