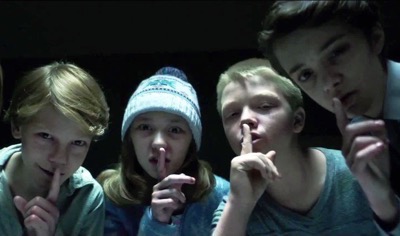 The original Sinister was a horror hit when it came out in 2012 and as with any good horror film there had to be a sequel. It’s always interesting to me that the horror genre in particular can crank out multiple films in record time. Other saga’s can take years, horror on the other hand can take 10 months. This of course produces uneven results.

In Sinister 2, out now on Blu-ray, Courtney (Shannyn Sossamon) has left her abusive husband bringing along her twin sons Dylan (Robert Sloan) and Zach (Dartanian Sloan). They go to the country where she thinks that she can escape and not be found. Courtney is more than a bit paranoid, she thinks everyone and anyone is out to get her. She’s worried about her husband finding her family, everyone could be a potential enemy.

Courtney meets Ex-Deputy So & So (James Ransone). He’s still working on the case of Demon Bughuul and thinks that Courtney’s home might be one of his targets. Courtney ignores him but he hangs on and forms a bond with her sons. Clearly needing a father figure the ex-deputy is filling a void for the twins. Dylan is getting visits at night from child-like ghosts. They are manipulating him and making him watch snuff films in the basement, saying things like, “the more you watch, the less bad dreams you’ll have.”

Zach is fighting with his brother because of the ghost’s and the infighting begins and the plot kicks into overdrive. One of the best things about Sinister 2 is that it really aims for more than the the jump scare of the moment. Not that it doesn’t have those, because some scares are telegraphed a mile away especially to anyone who has seen Halloween or Friday the 13th. However, you can tell that the filmmakers are aiming for something more and in the horror genre that’s really appreciated.

The plot that it’s trying to weave doesn’t necessarily work out perfectly, and there are several implausible moments. At first I liked the abusive family angle, it really helped set up some of the more interesting dynamics that general horror films don’t allow for, but eventually that plot-line seemed more like filler rather than necessary plot point.

One of the things that really set Sinister 2 apart for me were the visuals. The film has a gritty quality to it, that I really liked. It served the plot well and you could easily see this being shown at an old school drive-in with an old speaker box in the car window. It sets a mood really nicely and that was such a huge bonus for me.

Sinister 2 arrives on Blu-ray in a fine transfer. The picture quality is wonderful and watching it in high definition really brings out the picture quality that would wouldn’t get from streaming. You can see all the intricacies and even the textures in the fabric pop. It’s really something you don’t see often in your standard issue horror fare. Personally, I don’t think that the film would have been as good if I watched it on a different format, the high definition even lets the home and the country have it’s own personality. It’s pretty impressive.

The special features on the Blu-ray release of Sinister 2 include four deleted scenes as well as extended versions of the snuff films featured in the film. There is also a making of Sinister 2 featurette talking about the new characters, cast and director as well as an audio commentary with director Ciaran Foy.

Overall, while Sinister 2 may be a fairly straightforward horror sequel, it still will provide enough scares to make horror fans come back for an almost assuredly Sinister 3 and Sinister 4. If you enjoyed the first film, I would say make sure to tune in for the sequel.

Sinister 2 is out now on Blu-ray!