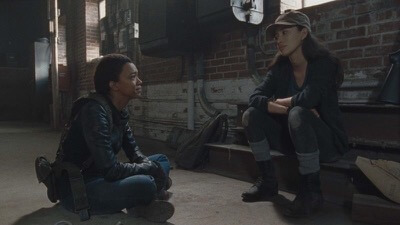 While we’re still waiting on the development of the story between Rick and the Oceanside group we focus on The Hilltop this week and how they are getting ready for the upcoming battle with Negan (Jeffrey Dean Morgan). They’re making weapons, drawing up battle plans and trying to train the residents to be combat ready and it’s all under the disapproving sneer of one big, cowardly, weasel named Gregory (Xander Berkeley). This guy gets worse every time he’s put on the screen! Part of me loves him because Berkeley is such an outstanding character actor but the Walking Dead fan in me is really tired of his crap and wants to see him either banished or just killed. When the Saviors come to The Hilltop he has an off-to-the-sides meeting with Negan’s right hand man Simon (Steven Ogg) where he basically gets in his good graces and gives himself the reinforcements in case the Hilltop residents try to take away his post as leader. So not only is he opposed to going against Negan he’s pretty much in bed with him now. He’s trying to find the perfect way to keep his leadership of the community and rat out Maggie (Lauren Cohan) and Co. at the same time. He even goes as far as to threaten Jesus (Tom Payne) later on since now he feels he has protection from whatever decisions he chooses to make. It almost doesn’t make sense. Why does he care so much about being a leader of a place that doesn’t even want him? I don’t know if it’s pride, ego, self-preservation or all of the above. 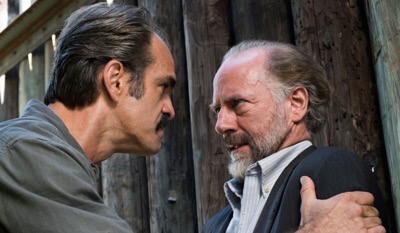 The whole reason why the Saviors are there is to look for our favorite jail breaker Daryl (Norman Reedus) since they were recently in Alexandria first. He and Maggie run down to the food storage cellar and hide out but the important moment is when the Saviors finally leave (and take off with the Hilltop’s doctor) that Maggie questions Daryl on how distant he’s been from her since he’s been there. She lets him off the hook about the guilt he feels over Glenn dying at the bat of Negan. This conversation has been needing to happen all season and its done short and to the point without having to draw out an unnecessary sob fest scene. He rightfully feels responsible but that’s because Daryl is one of the genuine best guys of this universe so he would take the weight of what happened upon himself. In a really screwed up way it IS his fault but more so because of Negan’s arrogance and bullying nature that things went down like they did. 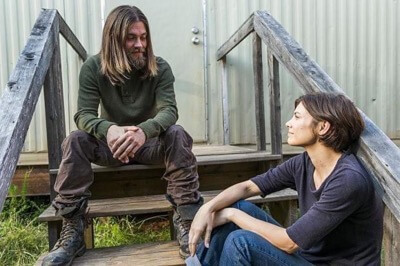 As all this is going down we have our two crusading women Rosita (Christian Serratos) and Sasha (Sonequa Martin-Green) on their journey to Negan’s compound to kill him. Even though our good natured Sasha tries to warm up to Rosita and ask her things about her past she still feels the need to put that bitch wall and push Sasha away. When they finally get to a large building that overlooks into the Savior’s compound they have nothing to do but wait for Negan to show himself. Sasha still being the gem in all this tells Rosita how much she has been good for the group and they are better off with her knowledge of so many useful things. Whether it’s the fact that she thinks she’s going to die in a suicide mission or that she just want to clear her conscious FINALLY Rosita lets her guard down and tells Sasha her story. The scene is one of those moments that needed to happen to humanize her character with the way she’s been this season since Abraham died. Her and Sasha needed to sort out their feelings and finally put it all out there about what the death of the man they both had feelings for has done to them. Apparently Rosita was more broken up about Abraham dumping her than we might have realized. But the most important thing this does is bring them closer together to be a united team in their mission to take Negan out. When their plan to take him out from the outside fails they decide to break in that night. Random coincidence that the side of the fence they decide to break in on that they run into Eugene (Josh McDermitt) and offer to break him out. But to their surprise he declines to go with them and runs away! Ah that bitch! I had a feeling he had turned. Some people are still trying to say he’s playing a role but I think this is the confirmation we needed. Only thing I’m still holding onto is when it actually comes down to the fight will he be able to kill one of his friends? And in another quick turn of events just when we think the ladies are both in this together Sasha goes inside the fence and locks Rosita out. “It’s not your time,” she says as she runs into the compound and we hear gunfire go off. With obviously no other option Rosita turns to run away but in the shadows comes out a figure with a crossbow which stops her in her tracks. Ah who is it?! 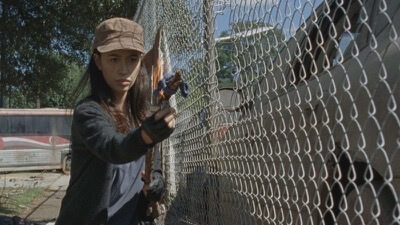 So here’s my unfortunate theory on how this will play out for Sasha. We’re either going to see her die next week or she’s going to get captured and that’s going to somehow trigger the war to happen soon enough for the finale. But either way I don’t see her living. We only have two episodes left people!! I think it was a great choice by the writers to let only Sasha go in. To do the predictable thing would be for both the women to go inside and kick tons of ass and accomplish their mission. This episode had a lot of emotional reveals with Gregory (even though it was a bitch one), Maggie, Daryl, Sasha, Rosita, and let’s not forget about the one earlier with Jesus! We finally learned a little bit more about our Zen ass kicker. See you all at the Oceanside community next week!! 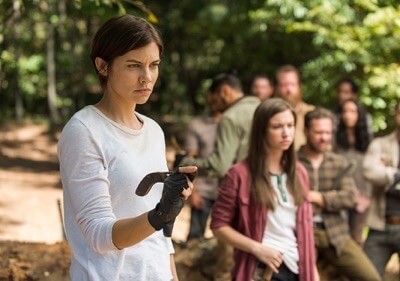