Today was the first day of the L.A. Times Festival of Books and this year I decided to do some things differently.  1) Try to attend only one or two panels so I can actually walk the Festival for a change and 2) Do some video reporting as well as pics and a write up.  I did both.  Although I don’t know if the videos are the best idea…mwahahahaha 😉

The day started with meeting my friend Lisa at the subway station and taking the train to the USC Campus, which thankfully has a stop right at the entrance to the Festival.  Of course you all know who went with me…#PocketJaime of course! 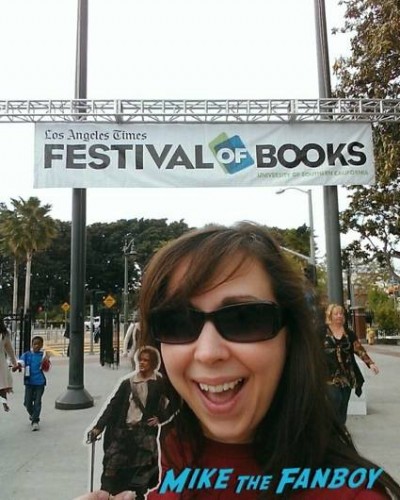 Like I said, there are so many tents,  it’s hard to know where to start.  There are also several stages:

But back to the tents.  There are bookstore tents: 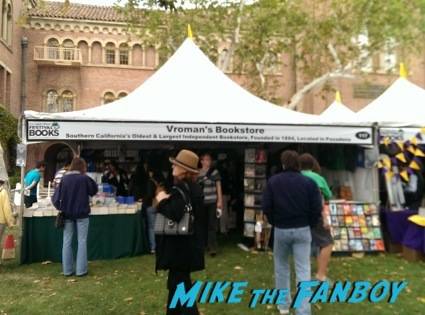 And some tents with different book related things like t-shirts, bags, jewelry, or just fun things in general: 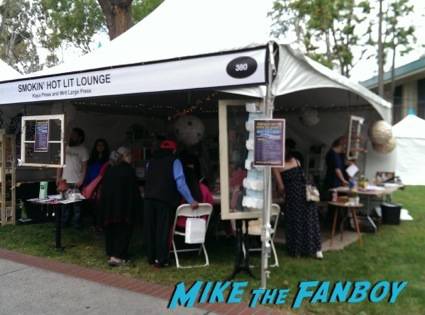 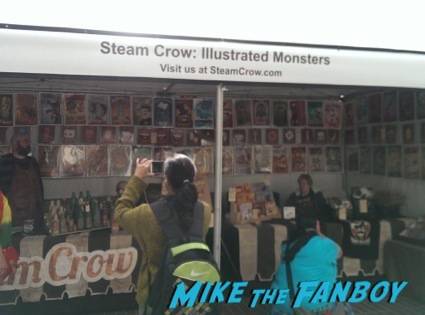 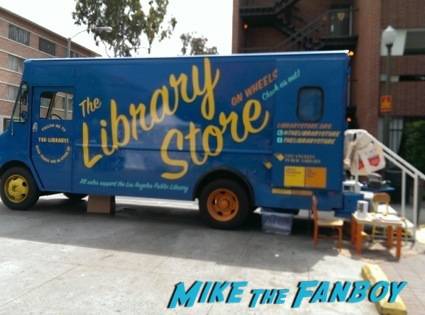 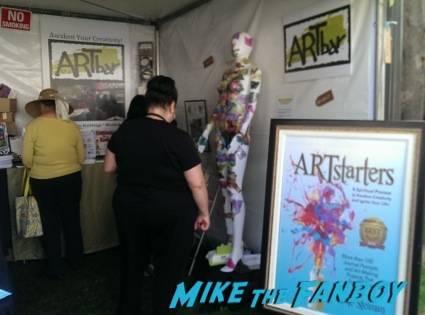 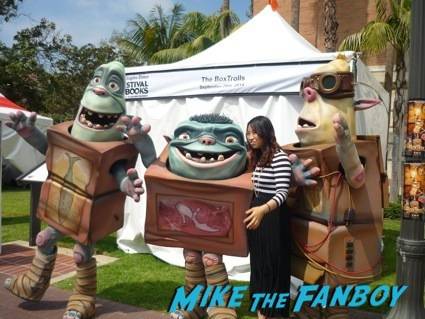 There is just so much to see and do.  I mean this place has a lot spread out over several areas: 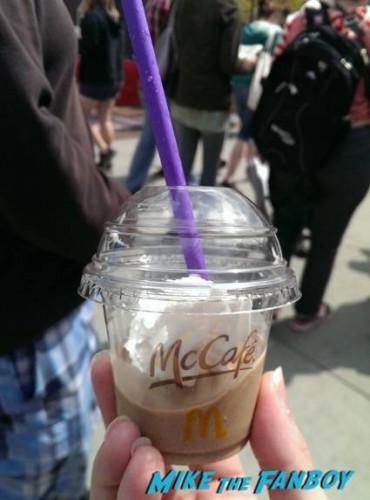 So, as I said I went looking for authors.  Not the ones who were on panels, but the ones who were there to promote their books that they’d published themselves and were trying to get exposure for.  I first came across this publisher and author…and they’re Jane Austen-esque! 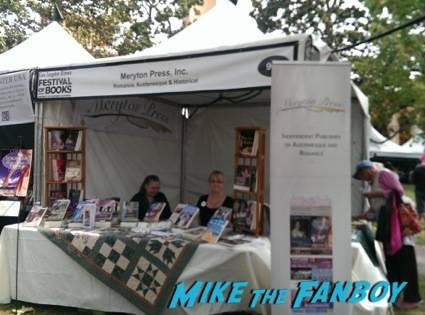 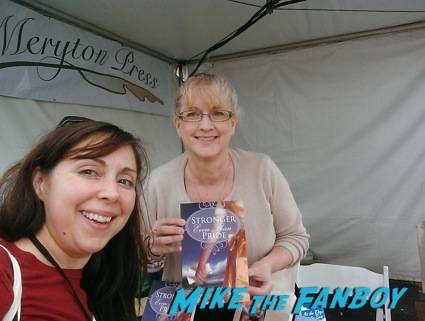 Then I found this author: 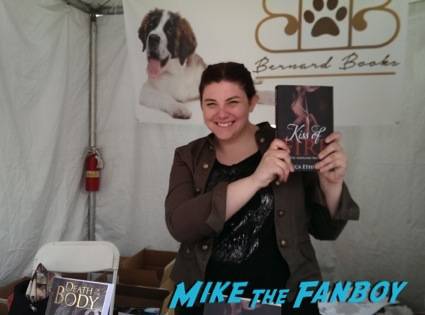 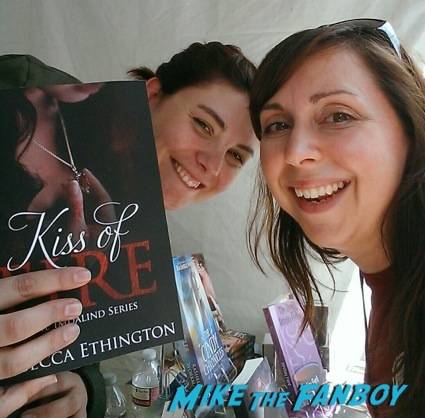 They’re company does YA, and some paranormal/urban looking stuff.

And finally, this guy who was a master at self-promotion.  I mean he talked me into a horror novel about zombies.  I hate zombies, but he sold the premise really well: 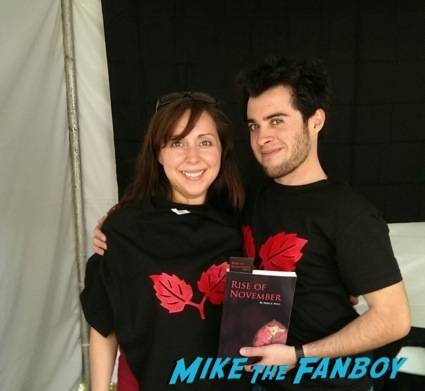 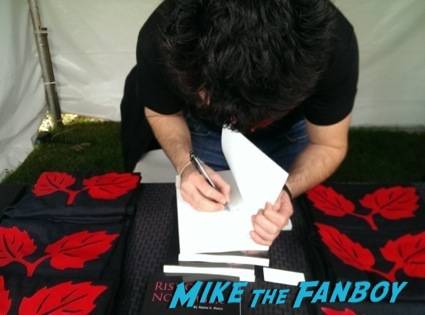 And, hey, not only did I get a signed book, but a free t-shirt!

Finally I headed over to the Jane Austen Society of North America’s booth and met Syrie James who has written quite a few novels – some about Jane Austen, one about Bronte, one on Dracula, etc. 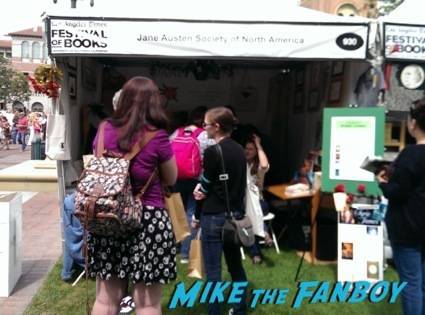 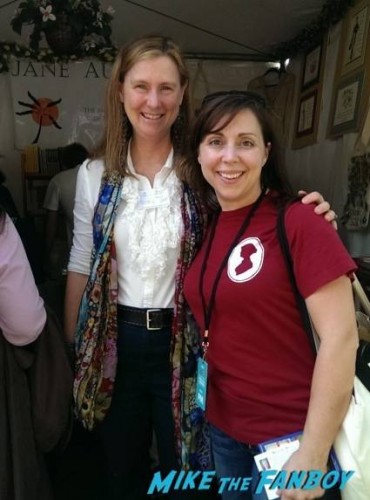 Then I realized that poor #PocketJaime has been hiding in my bag for a while, so I asked him what he wanted to do.  He took a look around: 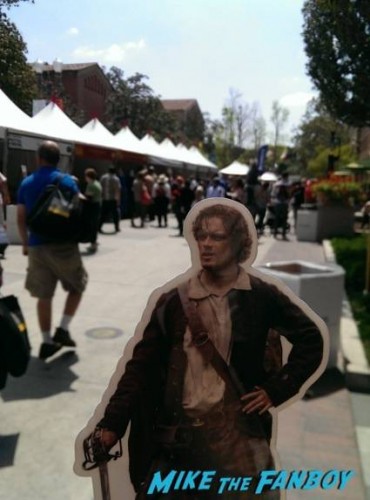 and thought it’d be fun to take a silly pic together at the L.A. Times pop-up photo booth.  He wanted me to pretend I was interviewing him: 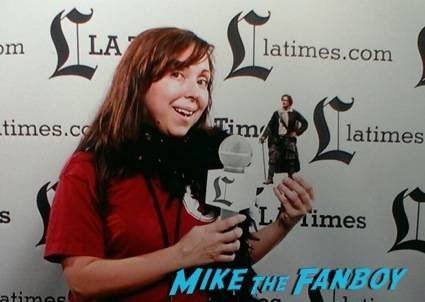 Everyone gets the bug at some point I guess 😉    Then he saw this giant tarp where people were writing the names of their favorite books: 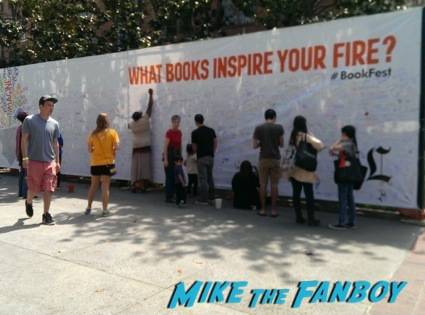 and he wanted to contribute: 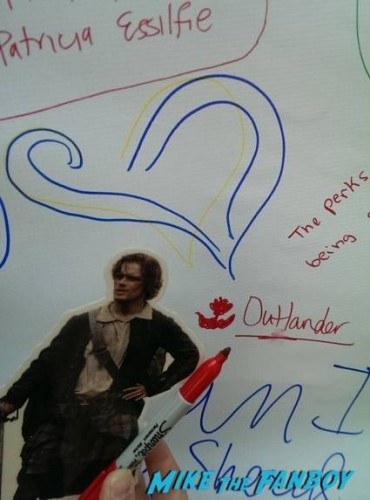 I think he wrote a good one down…don’t you?

I decided to walk to the other side of the festival and check out Artists’ Row.  There was an artist taking books that were slated for destruction or slated to be torn apart/recycled and turning them into sculpture: 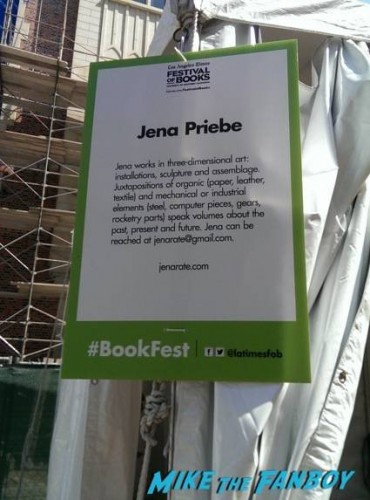 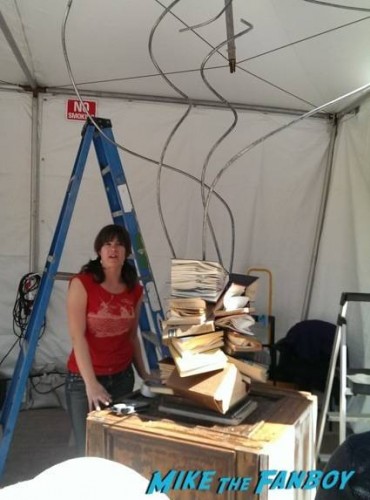 At some point I met up with Lisa again and we ate a little something.  I will note food is a bit of a pain.  I mean they have food trucks on one side of the Festival, but that was chaos and the campus eateries were pretty crowded as well.  After we’d had a little bite Lisa went to another panel and I walked around some more. I won a fancy fan at the L.A. Opera booth: 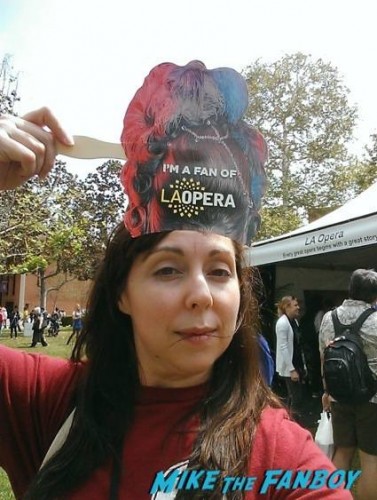 Captain America and members of S.H.I.E.L.D. were trying to sell me an American car: 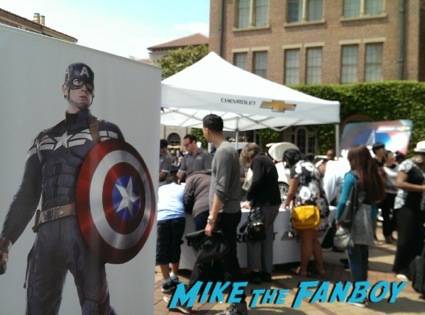 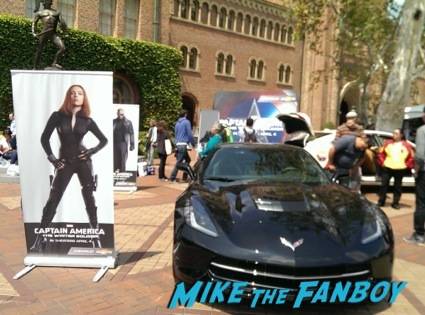 Finally around 4pm I’d pretty much walked the entire Festival so I decided to head to a YA panel.  I got there a little early so found a spot to sit and wait for them to let us in:

Here’s some advice book fans.  Don’t be a creeper.  If you see an author in the line for the restroom, don’t engage them in conversation about how you’re an author and having trouble with your manuscript WHILE THEY ARE PEEING!  And don’t continue that conversation while they’re washing their hands and you’re peeing.  It’s creepy.  It’s embarrassing.  Don’t do it.  Also, don’t be that person in a Q&A.  You know who that person is.  The one who has to try and ask a question about the craft of – writing, acting, directing, etc. – and make it as “esoteric” and over worded as humanly possible while telling the panel about their manuscript, screenplay, etc.  We aren’t there to hear about you’re great work, we’re there to hear the authors (actors, etc.) tell us about their book(s) and give us their stories.  Just please stop.  Thank you.

After the panel I met up with Lisa and we headed home.

Did I mention I got some signed books by the authors I met? 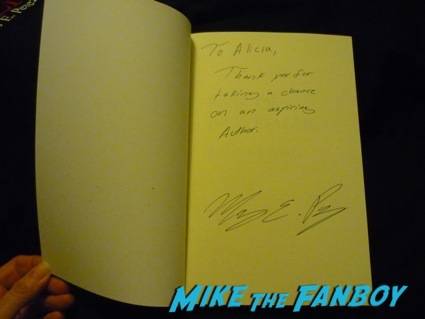 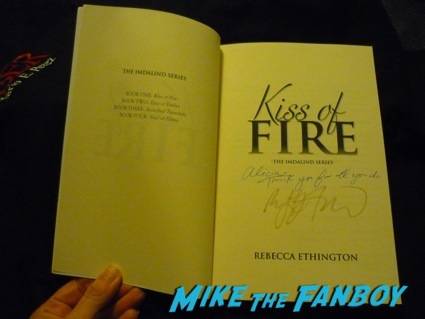 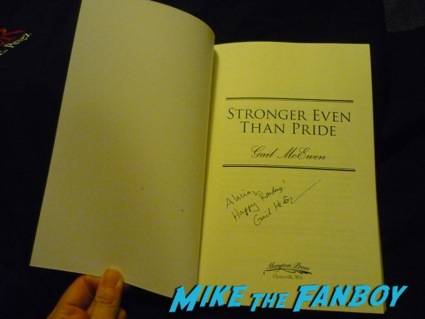 So in all it was a really fun day.  Like I said I’ve never walked the whole Festival before, I usually spend my time running between panels and panel signings, so it was nice to actually take the time to walk the booths and speak to people.  Which means I’ve got to read some books now because I promised I would do some reviews.  I can’t really speak about other people, but my experience today was pretty positive.  I mean taking the subway in is miraculous because trying to drive and park around USC can be a nightmare. Tomorrow on the other hand I have a lot of back to back panels which means I’ll either have to skip a panel or skip a signing.  Booooo.